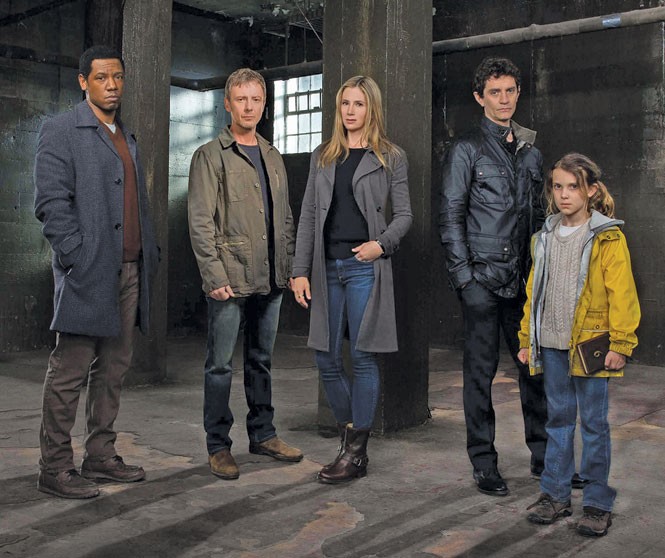 
Season Premiere: The Only TV Column That Matters™ is glad to be rid of Matt Smith and his stupid hair—bring on the 12th Doctor, Peter Capaldi. Season ... OK, Series ... 8 of Doctor Who introduces a less warm-and-wacky Doctor; Capaldi's incarnation is an all-business Time Lord who doesn't care all that much for humans or niceties—my kinda guy. While the timey-wimey shakeup is intriguing, I'm more interested in the new BBC America series that follows ...


Series Debut: This supernatural-murder-conspiracy-horror production from Glen Morgan (The X-Files) doesn't have a breakout star like Orphan Black's Tatiana Maslany, but it does sport an even creepier premise than cloning: "A secret society devoted to chasing immortality by seeking refuge in the bodiesof others." Yeesh. John Simm stars as an ex-LAPD cop with a nagging twinge of a British accent whose wife (Mira Sorvino) disappears after exhibiting strange behavior and awkward jazz dancing (uh oh—Black Box flashback). There's also a little girl (Millie Brown) who flips between sympathetic and terrifying personalities, an assassin on a mission (James Frain), an outta-nowhere appearance from screen vet Robert Forster, and the feeling that Intruders isn't going to start making sense until a few episodes in. You know, like Orphan Black.


Series Finale: The sensational-to-sucktastic arc of True Blood goes like this: Season 1: Exciting newness! Sookie, Bill and a reasonable amount of characters to keep up with! Sexy times! Season 2: Godric! More sexy times! Season 3: Time for the werewolves to get some! Russell! Season 4: Uh ... fairies? King Bill? Season 5: The Vampire Authority ... Billith ... fuuu ... Season 6: The ejection of extraneous characters and bullshit begins! Probably too late! But here's some sexy times! Season 7: Let's win back the fans by killing off everybody they still love! But will True Blood truly end the way I've been wishing at least one brave series to conclude for years now, by snuffing out the entire cast? The Shield, The Sopranos, Rescue Me, Wilfred, they all blinked—to the True Death, Bon Temps!


Season Finale: Same goes for Rising Star; the sub-CW ratings indicate that this will be a series finale, as well, so ... Rising Star is yet another karaoke competition that claims it will launch a superstar music career, even though these shows have proven themselves to be the Witness Protection Program of the entertainment business. But! Rising Star has a twist: The "judges" (Josh Groban, Brad Paisley, Ke$ha and Ludacris) don't have the final say—you do, 'Merica! Well, you would if you were watching, anyway. I'm no math surgeon, but if American Idol and The Voice, which are still viewed by tens of millions, can only produce obscurities for the state-fair circuit, then the "winner" of Rising Star will be buried near the Earth's core, shot into space or employed as Ke$ha's fluffer.


New Series: Most of the press around TNT's new Legends refers to star Sean Bean's propensity for screen deaths (Game of Thrones, Lord of the Rings, Family Guy, etc.), and little about how the producer of 24 and Homeland and Sean goddamned Bean ended up on a basic-cable FBI potboiler with a C-list cast and dialogue that actually includes lines like "trust no one" and "pulling this cowboy crap." Still, the dumb-fun factor of watching Bean out-act everyone as a grizzled agent who's been undercover so long he doesn't know who he is anymore—another line sure to be uttered—can't be denied.