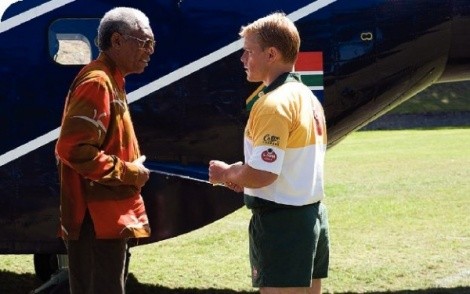 Fifteen years ago, there was no American director I would have trusted more with material like Invictus than Clint Eastwood. That was before he decided, apparently, only to use emotional bullet points that were underlined, italicized and shouted through a bullhorn.

The transformation is fairly staggering when you look at it. His 1992 masterpiece Unforgiven was a work devoted to erasing the sentimentalized mythology of the Old West; in 1995, he took perhaps the most saccharine romance ever, The Bridges of Madison County, and turned it into something lyrically heartbreaking. But since the start of this century—the odd outlier like Million Dollar Baby notwithstanding—Eastwood has spent his time primarily either on inherently overwrought scripts (Gran Torino, Flags of Our Fathers) or giving good material a solid dose of cinematic bombast (Mystic River). Invictus may tell an uplifting true story, but as a movie, it encapsulates a little bit of everything that has gone sour in Eastwood’s filmmaking.

The tale opens with the 1990 release of South African anti-apartheid activist Nelson Mandela (Morgan Freeman) after more than 25 years in prison. Just four years later, he’s the country’s newly elected president, but he still faces a nation deeply divided along racial lines. The country’s national rugby team, the Springboks, seems to be a lightning rod for those divisive feelings, a symbol for many black South Africans of the old regime. But Mandela instead sees the possibility of the team as a unifying element—and with the Rugby World Cup scheduled to take place in South Africa in 1995, he enlists the support of the Springboks’ team captain, Francois Pienaar (Matt Damon), toward making the team a collective rallying point.

There’s a lot of potentially fascinating drama in an inexperienced politician like Mandela facing the challenges of a nation in turmoil—but screenwriter Anthony Peckham, working from John Carlin’s nonfiction book, appears little interested in such workings. The Mandela that we see here is an almost supernaturally serene, gracious and dedicated man, one who, despite his lack of political savvy, speaks only in scripted-sounding platitudes like, “The day I’m afraid to [take an unpopular position] is the day I’m no longer fit to lead.” Freeman brings all his familiar dignity to the role, but none of the prickly energy of which he’s also capable. Yes, Mandela has some family troubles, and he gets tired from overwork, but basically, he’s the Buddha wrapped in the Dalai Lama. Maybe Mandela really was this saintly, but as a dramatic protagonist in Invictus, he’s a thudding, preachy bore.

That’s what you get, though, when you craft a film around a noble idea—the film’s title comes from the 1875 motivational poem by William Ernest Henley that inspired Mandela in prison—rather than around characters. Pienaar is virtually the only other significant character, and the script makes a token effort at exploring his shift from apolitical athlete to Mandela’s partner in patriotism-building. There’s a subplot involving tensions within Mandela’s integrated security team—particularly Mandela’s suspicious chief bodyguard Joshua (Tony Kgoroge) and a former secret-police operative (Julian Lewis Jones)—but little about their ebony-and-ivory meeting of the minds rings true. Eastwood and company appear so concerned about moving us along towards the on-field rugby action, filling scenes with exposition about South African societal dynamics and the World Cup draw, that they seem to see all the people in Invictus as a collective roaring crowd, rather than individual human beings.

That on-field action was always going to be a tricky proposition, as well, given Americans’ general lack of familiarity with the rules of rugby. As the Springboks make their improbable run through the tournament, Eastwood spends huge amounts of screen time on the matches themselves, but it’s often unclear exactly what’s happening. More crucially, though, it’s unclear why it’s happening—we see virtually none of the process by which Pienaar gets buy-in from his team on using their role as national icons to make up for their relative lack of talent. Indeed, in his determination to make a conventionally rousing sports drama, Eastwood fails to see that the on-field action of the final match is almost beside the point; what matters is that black and white are now cheering together. Considering how much Eastwood seems to favor emotional noise at this point in his career, you’d think he’d have figured that out.