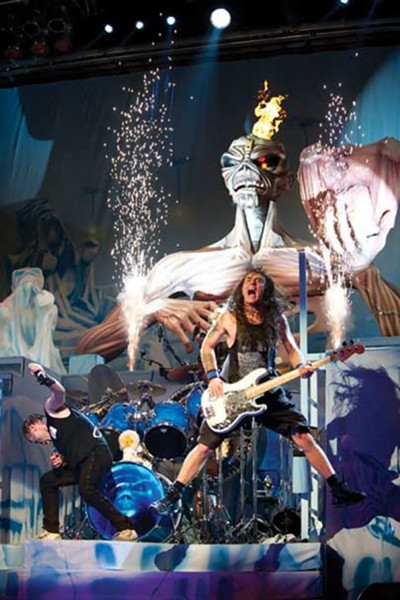 For nearly 40 years, Iron Maiden has been the gold standard in heavy metal, influencing countless musicians, terrifying parents and just being awesome. In advance of their first Utah show in about 20 years, City Weekly takes time to reflect on some killer trivia regarding the legendary U.K. band.

DI’ANNO MAIDEN
Although Bruce Dickinson is widely seen as the face and, more importantly, voice of Iron Maiden, the band’s first two albums feature a different singer and a sound. Iron Maiden (1980) and Killers (1981) are more rowdy bar rock and punk than the proto-power metal sound for which Maiden is best known, and feature the raw, raspy vocals of Paul Di’Anno. Although some fans favor one over the other, one might argue there are two “classic” Maiden sounds. (Blaze Bayley, late of Wolfsbane, sang for Iron Maiden for 1995’s The X Factor and 1998’s Virtual XI, but these albums aren’t as highly regarded as those featuring Di’Anno and Dickinson.)

MAIDEN DAMIEN?
Naming your band after a medieval torture device and using a baleful, skeletal mascot sort of begs for picketing by shrill, chickens—t theists. But it was the band’s 1982 album The Number of the Beast—more specifically, its title track—that really kicked off the Christian silliness. Copies of the album were burned and smashed with hammers by church groups. The song, however, merely references a bad dream Maiden bass player Steve Harris had after viewing Damien: Omen II. (Except he handled scary art more proactively.) The song also takes a cue from Scottish poet Robert Burns’ “Tam O’Shanter,” about a man who has a disturbing hallucination on the way home from the pub.

Actually, most Iron Maiden lyrics are inspired by history and world events that reflect man’s inherent evil. “Run to the Hills” is about Whitey screwing over Native Americans. “2 Minutes to Midnight” references “jellied brains,” “demon’s seed,” “napalm screams” and killing “the unborn in the womb,” but it’s really about the Doomsday Clock, a Cold War-era countdown device similar to our current color-coded National Terrorist Advisory System.

Incidentally, drummer Nicko McBrain has been a born-again Christian for about 15 years, and Jesus seems to be cool with him staying in the band.

MAIDEN ’EAD
Maiden’s mascot Eddie is totally freaky, but in the best way. The bony, malevolent creep was originally called “Eddie the Head” and was a blood-spurting mask worn by then-drummer Doug Sampson when the band played its set-closer “Iron Maiden.” He’s since appeared in the live show in full-costume walk-ons and giant animatronic form.

It’s easy to see why Ed originally gave pause to parents and priests around the world, since he’s been shown brandishing weapons and puppet-mastering Satan, but he’s simply the metal analog to Ronald McDonald. That is to say, a product icon. Only he’s far cooler and less deadly than Ronald’s fare. An unlike Ronald, Ed’s still around. Expect crowd-pleasing pop-ins at the show.

MAIDEN AIRWAYS
When Dickinson left Iron Maiden in 1993, he made a solo album and took flying lessons. He eventually became a commercial pilot for U.K.-based Astraeus Airlines and regularly flew passengers to destinations in Europe and the Middle East. And for Iron Maiden’s 2008-09 and 2011 tours, he transported the band in their own jet, called Ed Force One. Surely every seat-back pocket contained a copy of Dickinson’s satirical novel from 1992, The Adventures of Lord Iffy Boatrace.

FOOTY MAIDEN
“Up the irons!” is the rallying cry of Iron Maiden fans around the world. It paraphrases that of West Ham United, a London soccer team favored by Harris. That doesn’t mean Usana staff will stand for hooliganism if they don’t play “Prowler.” Be cool, so Iron Maiden doesn’t wait another couple of decades before comin’ back.