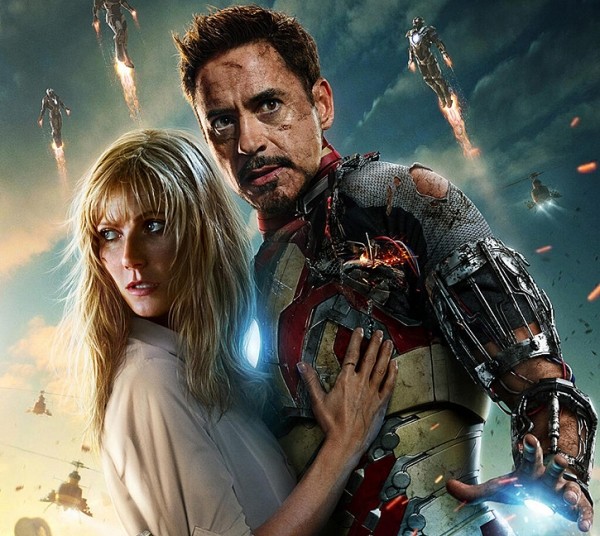 The least interesting thing about the otherwise hugely entertaining Iron Man movies is, ironically, Iron Man. The suit of powered flying armor, that is. Hiding Robert Downey Jr. behind a metal mask and giving his idiosyncratic performance over to CGI cartoon battles make for an enormous squandering of quality cinema time. If only we could have an Iron Man movie without Iron Man.


The comic-book purists are going to howl over Iron Man 3 for various reasons, the least of which is the fact that Tony Stark, the billionaire genius playboy philanthropist who now has in his garage a veritable army of Iron Man suits, spends barely any time at all in any of them here. It’s very much not ironic that screenwriters Shane Black (yes, Lethal Weapon Shane Black) and Drew Pearce, a British TV writer, are playing around a lot with trying to figure out just what it is that makes Tony Stark Iron Man—and what makes us believe that a suit of armor represents heroism. Where does Tony Stark end and Iron Man begin?


Stark went out of his way in the first film to continually point out that he was not a superhero, but this time, he’s living with genuine insecurities—and admitting to them—that that younger Tony would have taken great pains to hide. He’s all PTSD nightmares and panic attacks since the events of The Avengers: “Nothing’s been the same since New York.” It’s such a simple line, but it’s startling coming un-ironically from the reflexively snarky Stark. And also coming from director Shane Black, who dresses it in the same unexpected combination of sweetness, verve and vulnerability that he got out of Downey Jr. in his most recent film, the sublime Kiss Kiss, Bang Bang.


So Iron Man 3 has already nudged Tony out of his comfort zone—which is always where the interesting things start to happen—before it really goes to work on him. He publicly challenges a terrorist known only as the Mandarin (Ben Kingsley), which ends in the destruction of his home and tinkerer’s garage HQ. So he’s now lying low, trying to figure out his next move, which would appear to require solving a series of mysterious suicide bombings attributed to the Mandarin.


Always, though, Tony’s biggest obstacle is himself. There’s never a moment where you’re tempted to wonder why the rest of the Avengers don’t come to Tony’s aid, not only because of the clever structuring of the plot—Tony is believed dead after his house is blown up, and later, events simply move too quickly for anyone to have had time to scramble—but simply because of how intimate the electromagnetically powered heart of this story is.


And yet, Black and Pearce leave us with lots to ponder in a grand scale, too. Empty suits, broken-down suits, suits with someone else inside ’em: How do they change the way we see Tony? How much of “Iron Man” is image, and how much is propaganda we willingly buy into? Stark’s military buddy Rhodey (Don Cheadle) is now officially dubbed, in his own suit of stars & stripes armor, the Iron Patriot, which they both snicker over. Yet this is a world—both onscreen and off—in which such nonsense is effective. How much of the power of the Mandarin to terrorize comes from his pirate broadcasts, in which he appears as an outlandish caricature of an “Eastern” boogeyman? Hell, we’re even left to reconsider how our notion of the traditional damsel in distress can be upended so easily thanks to our own preconceptions about the genre. Thankfully, Black and Pearce have chosen to let Tony’s life and business partner, Pepper (Gwyneth Paltrow), continue to be one of the most intriguing lady sidekicks the genre has seen. She’s never less a damsel in distress than when you think she is.


There isn’t a single thing wrong with this flick. OK, the 3-D is even more pointless and superfluous than in most 3-D movies. But the cloud of air I was walking on afterward meant I was hardly bothered by that. It’s rare that the threequel is the best of the bunch. Savor it.