It Was 50 Years Ago Today

One of the artists behind the Beatles' Sgt. Pepper album cover prefers to look forward. 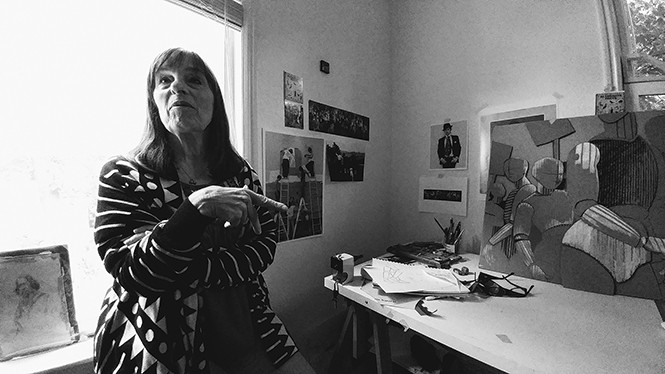 Fifty years ago, Jann Haworth helped create what is likely the most famous album cover ever. By now, as anniversary after anniversary of the Beatles' Sgt. Pepper's Lonely Hearts Club Band—released in the U.S. on June 1, 1967—has passed, Haworth has absorbed as much of the praise, criticism, re-examinations and trivia about her cover art as she can. Enough has already been said about The Beatles' groundbreaking concept album—an early prototype of the idea of the LP as art—that Haworth seems weary of the prospect of discussing it all over again.

This time around, the album is celebrated with a deluxe 50th anniversary reissue, along with countless tributes and celebrations from music fans everywhere. And why not? Sgt. Pepper—from its cover to its tracks—is an undisputed and immovable icon.

But Haworth has trouble with icons. As the daughter of Oscar-winning Hollywood art-director Ted Haworth (Sayonara) and artist Miriam Haworth, growing up around such houseguests as Marilyn Monroe and Alfred Hitchcock, she knows that legends only loom as large as we allow them to. "They're just people," Haworth says of the celebrities who criss-crossed through her formative years. "They're nothing special. They're nothing different."

So it's no surprise that, even in the case of venerated work she helped to create, Haworth is all but tapped out of any reverence for Sgt. Pepper: "We need to grow up, culturally." Idol worship, she says, "is kind of teenage, isn't it?"

Haworth was only in her mid-20s when she and her then-husband, artist Peter Blake, came up with the idea for the cover art. It shows three rows of life-size photo cutouts surrounding the Beatles in a group portrait that straddles the line between Victorian propriety and Summer-of-Love surrealism. With some regret, Haworth points out that the majority of the figures are men, and that the women who do appear are mostly celebrities—including three versions of Shirley Temple. "Certainly, I should have been bright enough to say that, if we're including women, we should do some research on women of stature," Haworth says. "That's so pathetic and ill-advised."

It would be difficult to find a tougher critic of her most famous work. But while she might tire of talking about it, she has often revisited it. Most notably, in 2004, she created the "SLC Pepper" mural, a simultaneous recreation and deconstruction of Sgt. Pepper that decorates the east wall of a parking structure at 250 S. 400 West. In this version, the Beatles are replaced by four faceless placeholders, and the figures surrounding them are a split 50/50 between men and women. Haworth says the do-over is an apology, "but also trying to set the record straight or improve on the original."

Perhaps some of Haworth's frustration with the image is how anchored it is. She has moved on as an artist, while the art itself stays frozen in 1967. Each new plaudit heaped upon Sgt. Pepper serves only to cement it even deeper to a fixed point in time that only recedes further into the past.

Haworth is more excited about what she's doing now—a project that will remain unfinished. "Work in Progress" is a 36-foot-wide stencil collage of historical women arranged in a group pose similar to the one on the Beatles' magnum opus. The crucial difference, aside from gender, is that each woman is rendered by a diverse group of artists and non-artists alike. In all, 123 people slowly added to the roster of 150 figures as Haworth and her daughter, collage artist Liberty Blake, arranged them onto panels. As they take the project with them to different schools and exhibitions around the country, a new group contributes a batch of figures to another panel.

As she looked it over before its opening exhibition at The Leonardo, Haworth happily pointed out the diversity of the group: Supreme Court Justice Ruth Bader Ginsberg rubs convicted spy Margaretha Geertruida MacLeod (aka Mata Hari) and Princess Diana. Each was chosen by a different artist for a different reason. That way, "Work in Progress" isn't irrevocably tied to any one person or entity. This work "doesn't belong to anybody," Haworth says. "You can't own it."

The idea for the new mural began around 2008, but didn't really gain traction until around 2015, a year that saw Hillary Clinton start down a path that Haworth and many others were sure ended at the White House. She says she began to see "Work in Progress" as something that could mark the historic moment when we finally elected a woman as the leader of the free world. It would stand as a symbol of all that had been achieved and the women who helped pave the way—until, suddenly, it wasn't. Looking at the collage on election night she felt as if she had failed them. "It changed overnight," she says.

Pieces of "Work in Progress" have since been to the Women's Marches, both in Washington, D.C., and in Salt Lake City. In light of Donald Trump's electoral win last November, the mural's message has morphed from one of celebration to one of urgency. It remains unfinished. Its future significance is anyone's guess. But right now, it's much better than being stuck in the past.