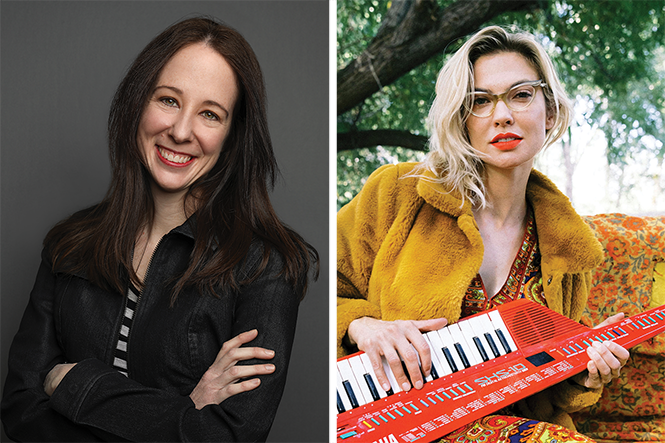 What a time it must be to be a young artist—or indeed, a young label. Besides figuring out how to make one's own music, newbies and industry vets alike have been forced to navigate a pandemic for nearly a year. That's certainly been the reality at the brand-new Utah-based record label Wonderwild Records, a project which found Mindy Gledhill and Fawn Goodman teaming up to create opportunities for fresh-faced artists ... right before the pandemic hit.

The two met through a professional music relationship of their own in 2015, when Gledhill was part of the Provo synth duo Hive Riot. Goodman was managing her own booking agency at the time, and reached out to book with the band, which led to Goodman managing them for a time.

Even after then—with Gledhill moving forward with a solo career that had taken off in 2007 with her album Feather in the Wind—the two maintained a friendship, floating the idea over the years of starting a label. "It's something that I had thought about for a really long time, even from the very beginning part of my career," Gledhill says. "I just had always felt like mentoring other people and incorporating business aspects of music in what I do are things that I enjoy."

And in 2019, the topic came up again, this time while the two were visiting a fashion exhibit in Dallas. Goodman, too, had long felt an affinity for fostering young talent, though for her it was through a program at Warner Music finding and mentoring college students in all things music industry—many of whom are still execs there or elsewhere. "It felt like Mindy and I both knew specific talented people that we knew wouldn't be able to realize their potential without the help of a label," says Goodman.

Though DIY artists do sometimes make it on their own, the fact stands that unless an artist is already well-connected and in a hot-spot city, it can be almost impossible to stake a claim in the music world. "The industry is very much looking at analytics, so they really want artists that have already arrived before they take a chance on them," says Goodman. "And what Mindy and I noticed is that particularly for certain genres—pop music or indie pop—it's really hard for a young artist who isn't in say, New York or L.A., to find their community through networking without people who have the experience to help guide them."

So, enter Wonderwild, a label that seeks out and centers young up-and-comers and gives them the help they need. They've already snagged two young artists for the label: Sophie Blair, whose first EP Arteries was released towards the end of 2020; and Bad Heather, who has two singles hot off the press.

Blair, their first signee, was a kid neighbor to the older Gledhill, and played for years primarily in indie folk bands before reconnecting with Gledhill, becoming her studio assistant, embarking on tour with her and eventually opening shows for her as a soloist. Goodman recalls Blair's immediate, rare power over the audiences as part of the reason they decided to invest in her as Wonderwild's first artist. The result was a powerful EP with a surprising and striking pop bent. "We helped her find the producer that we thought at the time would be best for her, but she's very hands on in making those choices," Gledhill says of Blair's pivot to pop.

After snagging the two artists, and securing last-minute funding (they got their contract signed that chaotic week in March 2020 right before the pandemic settled in) from Sony Music off-shoot The Orchard, they then addressed the challenge of the pandemic. "In a year where there's no touring, it's really great in a lot of aspects, because we can focus on letting them grow their numbers without putting a lot of money into touring—because at first, touring is expensive when you don't have a fan base," explains Gledhill. "I think in a way we've had this ideal situation where our artist can be incubated, as they develop their brands and as they start to build up their fan base on the digital platforms before we invest a lot of money in touring."

It also gives the artists more time to make music—Blair has a new EP already on the way on Feb. 5. And since Wonderwild hopes to gather more talent from beyond Utah's borders when they can, it's also good that everyone has more time to make music now, specifically the kind of DIY, bedroom pop that Gledhill sees as the changing face of pop.

Goodman and Gledhill also hope Wonderwild disrupts the industry in other ways. "I'm proud that we're a female-run independent label, because there aren't that many of us, and I want to inspire more women to be at the helm of the music industry instead of in supporting roles," Goodman says. "That's something that Mindy and I are going to continue to be proud of, and hope we get some recognition for that so that other women want to do what we do."

They're off to a good start, with their artists and their ambition. Keep up with Wonderwild @wonderwildrecords on Instagram.