It's All in Your Head

No reason to call yourself creative 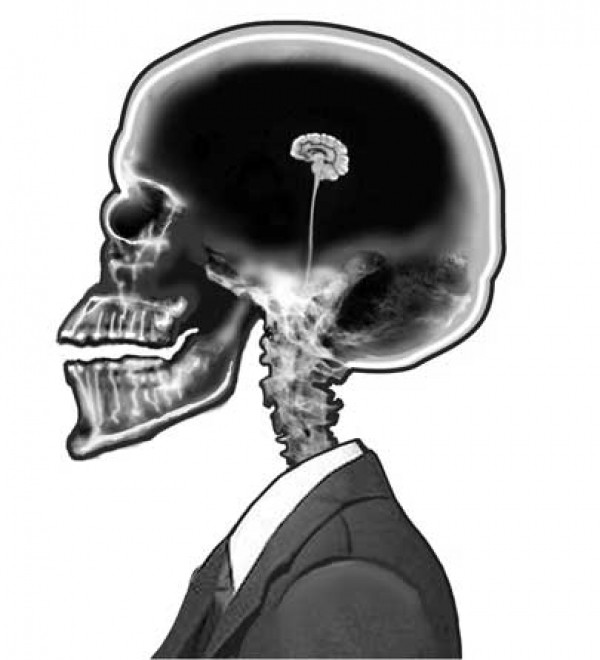 A new study from University of Utah neuroscientists uses brain imaging to debunk the idea that the left side of the brain controls logic and analytical thinking, while the right side is responsible for creativity and thoughtfulness. “It’s just one of those urban myths,” said Jeff Anderson, a University of Utah professor of radiology and lead author of the study. —The Salt Lake Tribune, Aug. 15, 2013

As the German philosopher Arthur Schopenhauer said, or perhaps it was the golfer Sam Snead, “There are two kinds of people in the world: those who divide up the world into two types of people, and those who don’t.”

In our own era, one of the most popular binary oppositions has been that of left-brainers versus right-brainers, and now come killjoy neuroscientists at our hometown university to throw cold water all over right-brainers and left-brainers alike. Sometime back in the hippie ’60s, the source of all kinds of harebrained ideas, the left-brain/right-brain split gained considerable traction. It seemed a whole lot better, simpler and more scientific than such popular and now discredited classification schemes as astrology, phrenology and Myers-Briggs Type Indicator.

Astrology (you are your sign) and phrenology (you are your head bumps) were far too fuzzy and complicated, lacking the elegant binary bifurcation of left-brain and right-brain. And though Myers-Briggs was built on basic binary dichotomies— extrovert/introvert, thinking/feeling, judging/ perceiving and sensing/intuition—the permutations of basic binaries were a hopeless muddle. You could be an ESTJ or an ISTJ or an ENFP or an ENTJ or an ISFJ, and so on and so forth. It made your head spin, whether you were left-brained or right-brained. It took no effort at all to figure out if you were left-brained or right-brained.

And if you can’t create anything, it’s because our left-brained civilization squashed the flowering buds of creativity. As the distinguished right-brained Maya Angelou so memorably opined, “We are all creative, but by the time we are 3 or 4 years old, someone has knocked the creativity out of us.” Damn them left-brained creativity kickers.

A little thinking using both sides of the brain would have called into the question the validity of creative right-brainers versus plodding right-brainers. Also, the qualities associated with each type tended to be arbitrary. Some claimed the left brain was “inventive” and the right brain was “literal,” which went against the conventional description, according to which the left brain was all about facts and the right brain was all about creativity.

With the demise of binary brain types, new and useful categories are bound to arise. Neuroscientists are excited about new brain imaging studies, at the moment limited to MRIs of the sulci, gyri and hippocampi of Utah politicians, that seem to confirm the reality of pea brains, hare brains and lame brains.