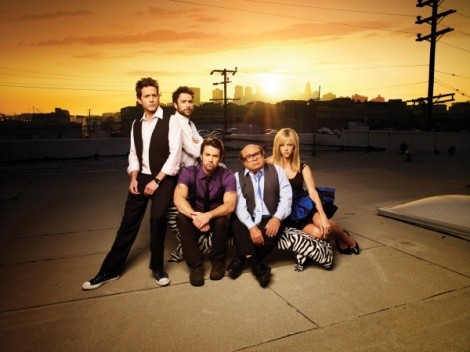 Season Premiere: Once again, I’m throwing out my “It’s Seinfeld for Satanists” review quote—feel free to use it in a promo, FX. The dozen-episode Season 5 (!) of It’s Always Sunny In Philadelphia kicks off with Mac, Dennis and Frank delving into house-flipping (poorly), Charlie taking on the legal system (worse), and Dee renting out her womb to get in on “that Octomom action” (upside: Kaitlin Olson in a bikini, Philly geeks). Still a sick-and-wrong sitcom for sick-and-wrong times—hey, that’s good, too!

Season Premiere:
The first season of the TV adaptation of Crash was a bit scattershot, spreading too many storylines across too few decent actors and giving Dennis Hopper waaay too much scenery to chew. Still, it was a sticky soap opera that mostly captured the gritty, claustrophobic sprawl of Los Angeles, and the bizarre love/lust affair between cop Kenny Battaglia (Ross McCall) and fiery Latina Inez (Moran Atias) was addictively creepy. Crash ain’t great TV, but there’s nowhere to go but up in Season 2.

Curb Your Enthusiasm, Bored to Death
Sunday, Sept. 20 (HBO)
Season Premiere/Series Debut: The Seinfeld reunion that’s all the buzz of Curb Your Enthusiasm’s seventh season? Doesn’t happen until Oct. 4. Until then, it’s just the usual Larry antics—like dumping his new wife because she has cancer, etc. In Bored to Death, Jason Schwartzman (remember him?) plays a down-on-his-luck writer who indulges his noir fantasies of being a private detective on—brilliant idea—Craigslist, when not getting loaded with his horn-dog magazine boss (Ted Danson) and hanging out with his stoned-dog illustrator pal (Zach Galifianakis). It’s weird, but good weird.

Heroes
Monday, Sept. 21 (NBC)
Season Premiere: This could be the season where Heroes gets back on track—yeah, I’ll believe it when I see it, too. At least the original core of super-powered heroes are sticking with one timeline (as opposed to, say, 73, like last season) and facing a manageable number of Threats Against Humanity, including an evil cadre of ... supervillain carny folk? OK, I’m in ...

Also new Monday: Dancing With the Stars, Castle (ABC); How I Met Your Mother, Accidentally on Purpose, The Big Bang Theory, Two & a Half Men, CSI: Miami (CBS); House (Fox)

The Forgotten
Tuesday, Sept. 22 (ABC)
Series Debut: In an overstuffed field of forensic-flashback crime dramas, here’s another forensic-flashback crime drama—but this one has Christian Slater! Here, he’s a ... groan ... troubled ex-cop who works on “forgotten” kidnapping cases with a quirky team. As The Only TV Column That Matters™ said a couple of weeks ago: “It’s Without a Trace of a Cold Case.”

Criminal Minds
Wednesday, Sept. 23 (CBS)
Season Premiere: Then again, not all crime procedurals are trench-coated filler: After Mandy Patinkin bailed a few seasons ago, Criminal Minds began getting darker and better—see the syndicated reruns on at all hours of the day across a dozen channels for proof. Former sitcom stars Thomas Gibson and Paget Brewster are as dead-serious and dour as (in)humanly possible for network TV, and their cases get more detailed and twisted every week. Final adzinger of the week: “It’s CSI: Hell.”