It's Not the Economy, Stupid

Worth finds restrained drama in the recognition that individual lives have value. 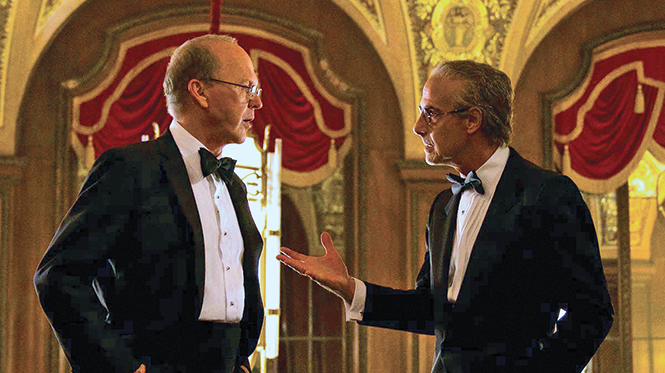 It seems unlikely that Worth was crafted with a "20-year anniversary of 9/11, what have we learned" sensibility specifically in mind—it premiered at the 2020 Sundance Film Festival, and subsequently became part of the COVID release date shuffle—but as it happens, that's where we find it. There have been many cinematic stories over those two decades that used the terrorist attacks as either text or subtext, including fiction features and documentaries, and they have ranged in tone from the sublime (25th Hour) to the ridiculous (Remember Me). As is true of any historical event, this one doesn't inherently make a movie any better or more profound just because the event itself was earth-shaking.

What has happened with Worth appearing in the midst of the COVID pandemic is a curious but depressingly on-point reminder of what large-scale disasters expose about the way our society is structured. From 9/11 to Hurricane Katrina to the current viral fustercluck, we're shown time and again that everything is political, even the things we solemnly try to tell ourselves aren't political. With an effective sense of restraint, Worth creates drama out of our tendency to de-individualize tragedies that happen on a large scale, and what inevitably happens to those without the clout to make themselves heard.

The fact-based focus is on Ken Feinberg (Michael Keaton), a Washington, D.C.-based attorney and Georgetown Law professor who takes on a seemingly thankless task. Faced with potentially catastrophic financial losses from post-9/11 lawsuits, the airline industry petitions Congress to create a fund for direct payments to the families of those who died. It's left to Feinberg and his team to create a theoretically objective formula for figuring out how much each life should be worth, and to bring on board 80 percent of the eligible claimants, including skeptics like widower Charles Wolf (Stanley Tucci) and the widow (Laura Benanti) of a New York firefighter.

Director Sara Colangelo (The Kindergarten Teacher) does include the events of 9/11 as a brief prologue, and it feels like the film could be stumbling out of the gate as we see familiar images of dust-covered, shellshocked people staggering through the streets of Manhattan. There's a lot of stuff packed into the two hours of Max Borenstein's script—including a newly-hired associate at Feinberg's firm (Shunori Ramanathan) wrestling with her own feelings of barely missing being in one of the towers that day, and the messiness of a gay partner as claimant in a pre-marriage equality America—and Worth skates along the edge of burying its lede.

It does find its footing, though, in weaving its way through the complexity of the job that Feinberg has taken on, and his evolving understanding of what it should be. Worth makes it clear that Feinberg's pro-bono acceptance of this role is something he genuinely sees as a patriotic duty, but it's a patriotism built on the abstract sense of protecting "the economy"—you know, that thing that's always very important when a massive corporation pleads to the government for salvation. While Keaton initially struggles with the character's broad strokes, including his Massachusetts accent and single defining trait of loving opera, he ultimately settles into a growing awareness that there should be some justice involved in the law, and that maybe it shouldn't all go to the wealthy families that can afford their own high-powered attorney (Tate Donovan).

The heart of Worth emerges in part from the conversations between Feinberg and Wolf, which Colangelo wisely pitches at a low-key level that doesn't turn them into mouthpieces for a debate. Yet it's found more powerfully in the scenes where Feinberg's staff—including his chief partner (Amy Ryan)—listen to the many different kinds of heartbreak people experienced as a result of 9/11 casualties. Feinberg isn't wrong when he distinguishes between money and greed in part of this restitution process, but he's also naïve enough at the outset not to recognize that greed is part of that process. After 18 months of listening to some people tell us who should be willing to sacrifice their life or health so that the economy can remain strong, Worth reminds us that it always feels easier to give things like "the economy" a louder voice than any one person whose individual loss can't really be calculated.