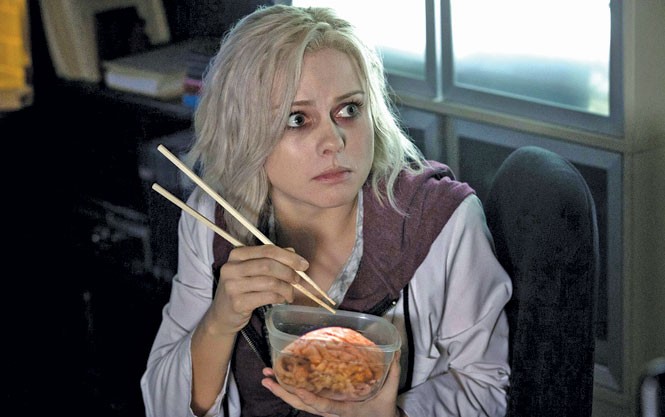 
Series Debut: The last Vertigo/DC Comics TV adaptation (Hellblazer to NBC's Constantine) didn't work out, but The CW is an easier fit for comic-book lore these days—even for something as out-there as iZombie. Writer/producers Rob Thomas and Diane Ruggiero have de-weirded iZombie somewhat for TV, but still: Perky medical resident Liv (Rose McIver) gets infected and turns part-zombie, withdrawing from life and becoming a "goth" coroner to feed her brain-a-month diet that retains her human consciousness and keeps her from going "full Romero." Since she also absorbs the memories of the murder victims whose gray matter she turns into brain lo mein, she finds new purpose helping a homicide cop (Malcolm Goodwin) solve cases—did I mention that Thomas and Ruggiero created Veronica Mars back in the day? The disparate crime procedural/horror comedy/CW snarkfest elements haven't quite aligned yet, but iZombie has potential (and a shot at a longer shelf life than Constantine).


Season Premiere: Donald Glover is busy making horrendous hip-hop (Childish Gambino); ditto Yvette Nicole Brown with terrible television (The Odd Couple); Chevy Chase ... R.I.P.? Anyway: Community still has core cast members Joel McHale, Alison Brie, Danny Pudi and Gillian Jacobs, as well as ancillary players Jim Rash (woo!) and Ken Jeong (meh), and creator/writer/producer Dan Harmon—and even some comedy-tested new additions (Paget Brewster and Keith David). So what if you have to watch it on Yahoo? A screen is a screen, old man! Season 6 promises more of the same ridiculousness that got Community canceled by NBC, though Yahoo will be rolling out episodes week by week instead of dropping all 13 at once, Netflix-style. Wonder if Bing would be interested in reviving Constantine ...


Season Premiere: Not sure what happened to comic Chris D'Elia between the cancellation of Whitney and the debut season of Undateable in 2014; either Whitney Cummings directed him to dial it down on her show, or the showrunners of Undateable are throwing him erroneous "Louder is better, brah!" advice. Whatever it is, he's now a malfunctioning T-shirt gun of Not Funny, which doesn't help this already sucktastic sitcom in the least—which, by the way, is NBC's 2015 model for comedy: forced, laugh-tracked and dumbed-down to TBS rerun levels (so, the 1995 model). See also ...


Series Debut: A lesbian (Elisha Cuthbert) agrees to have her perpetually single-and-straight best friend's (Nick Zano) baby—but then he suddenly marries a British girl (Kelly Brook) on the second date, and "a different kind of family is born." One that believes yelling their lines over canned laughter makes hackneyed sex jokes funnier (it doesn't) and producer Ellen DeGeneres can do no wrong (she can, so hard). One Big Happy is like a Funny or Die parody of an awful sitcom ... that goes on 20 minutes longer than it should.


New Series: First Bravo with Girlfriends' Guide to Divorce, now E! turns to scripted drama with The Royals? Has the "reality" finally all been filmed? Unlike GG2D, The Royals proudly dons the Soap Opera tiara and takes it over the tawdry top, with fictional modern British Queen Helena (Elizabeth Hurley) attempting to rein in her tabloid-fodder children ("My daughter, behaving like a common whore—explain this, but make it original this time," just one of Hurley's many snidely perfect burns). The Royals plays so big and brash, there's really no need to add Joan Collins as the queen's mum, but there she is. Glossy, sexy trash that entertains for an hour—E! could have done far worse.