How did the joke about sending a prisoner a cake with a file baked inside it originate? 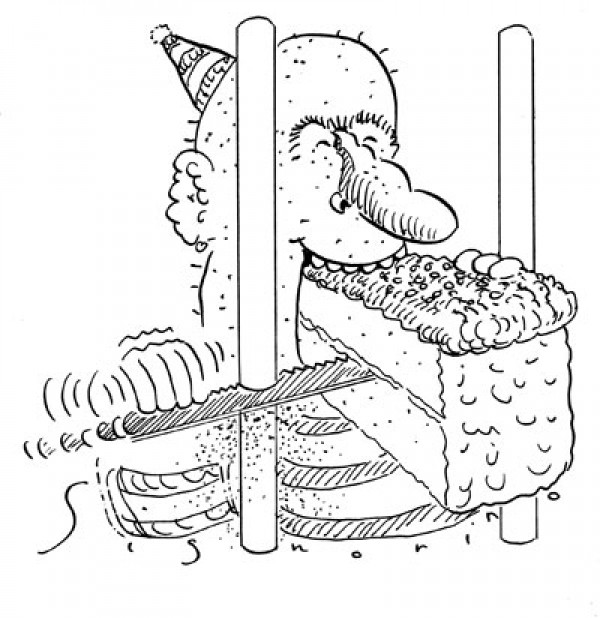 How did the joke about sending a prisoner a cake with a file baked inside it originate? Did people ever actually try this, or was there a particular movie or book it occurred in? —Terey

You think this is a joke? Actual escape tools have been hidden in actual cakes and the like so often you have to wonder why wardens ever allow prisoners to take receipt of baked goods. And it’s not just files, or even guns—wait till you hear about the welding electrodes.

Sneaking things to prisoners via cake has surely been done throughout history, but early reports are sparse—the first we found was in a compendium of criminal biographies published in the U.K. in 1804. William Blewitt, a minor-league pickpocket and housebreaker, had been sentenced to seven years’ transportation to Australia. Placed aboard a ship in the Thames to await the trip to the land down under, he learned that several of his fellow prisoners had acquired gingerbread cakes with saws and files baked inside them. Blewitt promptly passed word of the impending breakout to the ship’s captain, who seized the cakes and released Blewitt as a reward.

Other would-be escapees had better luck:

• In 1899, four prisoners escaped from jail in Frederick County, Md., using saws concealed in pies plus ropes made from blankets.

• In 1912, Charles Adams, a trusty who was allowed limited leave, received a pie with $200 inside it. He fled, using the money to pave the way.

• In 1914, the wife of a New Jersey convict named either C.J. or J.C. Wilderman (accounts vary), having learned that the warden liked mince pie, began bringing pies to her husband on visits. After a few weeks of this, she supposedly showed up one day with two: one for the warden, and a second loaded with escape tools for her husband. He and two cellmates broke out, leaving behind two saws and some crumbs.

The most creative cake-mediated breakout we heard about was that of Eamon de Valera, the Irish nationalist leader, who’d been imprisoned in England for his role in the 1916 Easter Rising. De Valera got his hands on the prison chaplain’s master key while assisting at mass and made a wax impression using candle stumps melted with his body heat. He then got another inmate to draw a cartoon postcard: One side showed a drunken man outside a door holding a precise depiction of the master key and saying “I can’t get in,” and on the other side the same man, now jailed and sober, peering through an accurate sketch of the keyhole, accompanied by the words “I can’t get out.” Miraculously, this got past the authorities and was delivered to de Valera’s confederates outside, who made a duplicate key and smuggled it into prison in a cake. It took two tries and two cakes before a key arrived that would work, but on Feb. 3, 1919, de Valera made his escape.

• “Lucky Tommy” O’Connor broke out of Cook County Jail in Chicago in 1921, just days before he was supposed to hang, reportedly by using a gun and bullets smuggled into a loaf of bread and a cake.

• In 1934, Robert Mais and Walter Legenza escaped from jail in Richmond, Va., using guns smuggled inside cans of baked chicken. Mais’s mother was later accused of having opened the cans, placed the guns inside and soldered the lids back on, but was released for lack of evidence.

• During the same era, two Georgia prisoners, Aubrey Smith and Leland Harvey, obtained guns and hacksaws that had been factory-sealed into cans of peaches by Harvey’s girlfriend, a cannery worker. Smith put his peaches to good use, but Harvey was foiled and had to find another way out—which he did, by attacking a guard and taking his gun, one of numerous escapes in his colorful career.

I concede, however, that failures are more common. Examples:

• In 1909, Frank Humely hatched a daring plan to escape from jail in Los Angeles: An associate was to hide a gun and ammunition in two sugar-frosted pound cakes and mail them to Humely, who would shoot the guards, take their keys, release all the prisoners nearby and escape in the melee. The plot was foiled when the sheriff noticed the cakes seemed unusually heavy and found they’d been carefully hollowed out to conceal a .38 revolver, 12 cartridges, a sack of tobacco and, for some reason, a dollar bill.

• In 1906, Thomas Stuart twice failed to smuggle carbon rods into jail to spring his brother Benjamin—the first time in an immense chocolate cake, the next day in a package of cigars. The idea apparently was to somehow hook the rods to the wiring for the cell’s electric lights and use them like welder electrodes to cut through the bars. While the Stuarts deserve credit for boldness, their scheme had little chance of success (these guys never heard of blowing a fuse?) even if the jailer hadn’t become suspicious of the high-carbon dessert.