About a year ago, Toshiba Richards experienced what she now calls a blessing, though she didn't recognize it as such at the time. In the grips of a methamphetamine addiction, Richards had been on the run for months, with multiple warrants out for her arrest, and had decided she would not go back behind bars—at least not for long. She kept a bottle of painkillers with her, and she had a plan for them.

"I was carrying them in my pocket the whole time I was on the run," Richards says. "My plan was that when [the police] picked me up, I would pop the pills, and when they booked me into jail, I would go to sleep and not wake up."

But she didn't have her pills when she finally was arrested—and that was the miracle that brought forth the unusual blessing of time in prison.

The eight-month spell of sobriety gave her time to learn about herself and her addiction, and account for the destruction in her past: struggles in her marriage; the loss of her children, taken into custody by the Utah Department of Child & Family Services; the dwindling respect and love from family, friends and herself.

For Richards, corrections did what it's supposed to. It put her on a different path and, now out of the system, Richards lives a new life in a simple apartment with secondhand furniture provided by a local LDS bishop. Her small coffee table holds scriptures and a copy of How Strong Women Pray, and she attends LDS, Protestant and Impact religious services, which she discovered while in prison.

But she's still paying debts both emotional and tangible for her time as an addict. She started using when she was 16, she says, after being kicked out of a chaotic and dysfunctional home. From there, meth became a way for her to lose weight, party and fit in, until it took everything, including her four children, three of whom she hasn't seen in eight years.

Richards works every day to pick up the pieces, which she says wouldn't even be possible without a major lifeline: housing.

Though it's generally considered a basic necessity, a place to live is out of reach for many Utahns, even those who have the means to pay deposits and rents. Richards is originally from Ogden, but could find no housing there because of the city's Good Landlord program.

Ogden is one of many Utah cities that have Good Landlord programs, which offer discounts to landlords who agree to certain conditions, such as annual training and, often, rejecting applicants with criminal records within the past four years. Good Landlord programs vary from city to city, but a state law sets the general parameters—such as that no city may discriminate against individuals with criminal convictions older than four years.

City Weekly received a non-comprehensive list of Utah cities with Good Landlord programs from the Utah Apartment Association and, after examining the ordinances, found that 11 of 13 cities' programs restrict landlords from renting to tenants with recent criminal records.

Those who are shut out of Good Landlord housing are faced with the limited pool of rental units that aren't part of the program. And though it's possible that some of these landlords have opted out of the program in order to give former convicts a break, their rental units are also not subject to city-enforced standards and are more likely to be rundown.

While proponents laud Good Landlord programs for their role in reducing crime, criminal-justice advocates see them as a way that lets cities move ex-convicts from housing to shelters—and from there, back to prison, where they come under the care of taxpayers, who subsidize their incarceration to the tune of roughly $30,000 a year.

Advocates are hopeful about the coming legislative session, however, when criminal-justice reform will be on the lips of many legislators as part of the conversation about relocating the Utah State Prison. Lawmakers will also likely be looking to tweak the state's Good Landlord laws, which govern how cities administer their programs.

Anna Brower, an analyst for the ACLU of Utah, says that so far, the discussion over the law has been a closed-door one, between the Utah League of Cities & Towns and the Utah Apartment Association. But she's hopeful that the discussion will broaden and consider the possibilities of making it so the law doesn't allow for cities to so easily shut out people with criminal records.

"Most people will go back to prison within the first three years, and housing is a huge part to re-entry success," Brower says. And these Good Landlord programs, she says, deny housing "for people during the period when it is absolutely most critical that they access it." 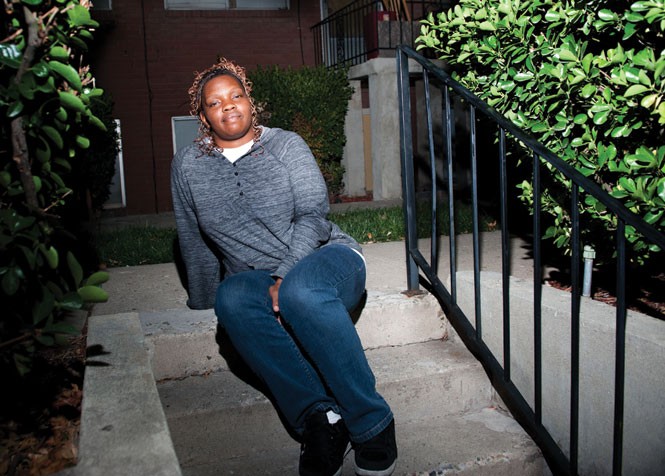 Nowhere to Turn
Life after prison comes with daunting challenges: gaps on résumés because of years spent incarcerated; landlords who prefer not to rent to ex-convicts; a lack of support for coping with addictions and mental-health issues; less education; and fewer job skills. It's a stacked deck ready to deal most inmates right back into a life of crime and inevitable arrest and reincarceration.

And according to Shannon Cox, who was an Adult Probations & Parole officer for 20 years, for women, the deck is stacked well before an arrest. It often starts with a pattern of sexual assault—and 1 in 3 women in Utah will experience a sexual assault in their lifetime, Cox says. She estimates that 90 percent of the women in Utah's jails and prisons are victims of sexual assault.

And many female inmates are "in prison for non-violent crimes," Cox says. "They get abused, and then they get addicted. They don't get the care they need, so they start self-medicating, and they stay stuck in the cycle."

Cox herself understands how the trauma of sexual assault can dramatically change the trajectory of a woman's life. She was the victim of an assault while attending Brigham Young University. Her reaction was deciding to become a cop.

"I wasn't going to be a victim anymore," Cox says. "So I figured if I was a cop, nobody would try and hurt me."

Cox says that for many years, her trauma made her a "mean cop," especially to male abusers. But as she progressed in her career, she began to see offenders as people like her, reacting to trauma. And she saw that men often react by lashing violently outward, and women by directing their anger inward—cutting themselves and succumbing to addictions.

"As you survive your own trauma, you see the humanity of the job," Cox says.

Now Cox has her own nonprofit, Journey of Hope, which aids women as they transition out of prison in finding services, housing and other kinds of support to keep them off the street and out of prison. And with so many forces likely to mire a released convict in a downward cycle, Cox says that Good Landlord programs do more harm than good.

"It's a way to keep people stuck," Cox says. "To tax someone that wants to give somebody else a break."

Cox says women are particularly vulnerable when they're released from prison. She makes regular rounds with other advocates, visiting and doing outreach with sex workers in Salt Lake City, and says the overwhelming plea she hears from women is for a place to stay.

"You can hand them a bag that has some hygiene items and a bleach kit in it, but when women say, 'I need to get off the street right now, I can't do this anymore,' and there is a John standing right behind them, and you don't got any place to take them, it leaves a sick feeling in your stomach," Cox says.

Not In My Apartment
The Utah Apartment Association acts as an industry association and lobby for the state's landlords and rental property managers. For the association's head, Paul Smith, the idea of doing everything possible to help ex-convicts find housing is admirable, but mostly at a theoretical level. The other side of the story, he says, is landlords who have to sweat over whether a tenant is paying rent by cooking meth, or neighbors who have to worry about the couple down the hall screaming and fighting at all hours of the night.

"Its a lot more personal to the landlord and the neighbor than the advocates from afar who are trying to help reform the criminal justice system," Smith says.

That being said, Smith adds, all parties—cities, ex-convicts, renters and rentees—will stand to benefit if the state law can be tweaked in some major respects in the 2015 legislative session.

For Smith, the major issue is the price of participation in Good Landlord programs.

The programs are meant to be completely voluntary, allowing property owners the choice between a reasonable discount for participating or a reasonable added cost if they would prefer to rent to whoever they want and forego inspections, training and jumping through other required hoops. In city-code speak, participating landlords receive a discount on the "disproportionate fee" that is generally charged for the added cost of city services like police calls that rental units use far more than, say, residential homes.

But if the price difference is too large, Smith says, it allows cities to economically twist the arms of landlords into participating.

He points out that in Ogden, for example, the owner of a fourplex who chooses to not participate in the Good Landlord program would pay roughly $300 more per year for the four units than if he was in the program. In Salt Lake City, nonparticipating landlords pay $342 per unit, and a fourplex owner would have to cough up $1,388 to opt out of the program.

"That's outrageous," Smith says. "It's an abuse of the program, and those kinds of fees need to be capped."

While Salt Lake City may be catching the most flak from landlords for its high fees, it doesn't restrict landlords from renting to ex-convicts, and simply encourages landlords to run background checks.

It's not required under the state Good Landlord law that cities bar landlords in the program from renting to ex-convicts, but the law does allow them to restrict landlords from renting to individuals who've had criminal convictions within the past four years.

Smith believes the state law could be changed to reduce that time restriction from four to three years, a move that might encourage advocates. But he expects that there will be resistance.

"Ogden won't like that," Smith says. "They have a disproportionate number of ex-convicts, and they're probably toughest on the [renting to ex-convicts] rule in their program."