He beat the impossible food challenge 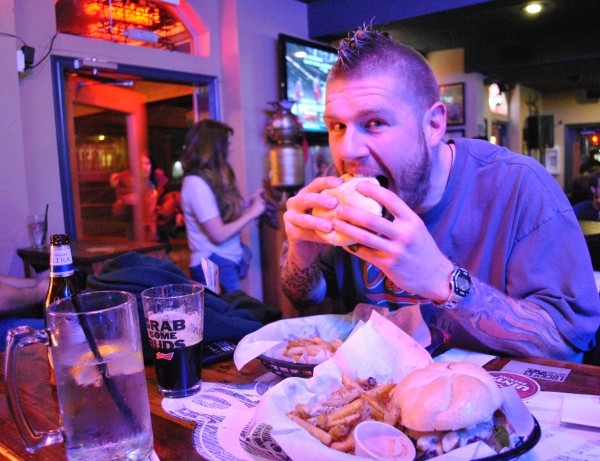 During the past century, man has made historic strides in flight, space exploration and, now, in food consumption. On March 4, James Snead became the first person to complete the Lucky 13 Challenge, finishing the Big Benny (a foot-tall burger with bacon, ham, cheese, sauteed onions, Lucky 13 sauce and 28 ounces of fresh-ground chuck) and the Lucky 13 (14 ounces of ground chuck topped with Belizean habanero puree and roasted habaneros, stuffed between two grilled-cheese sandwiches that are filled with sauteed onions, roasted jalapeños and roasted habaneros), plus a plate of fries, in under an hour. In the years since the challenge’s inception, no one had ever come close to a clean plate, and the prize steadily rose to $1,000 until it was claimed by first-timer Snead, a marathon runner and East Coast native who just completed the mechanical engineering Ph.D. program at the University of Utah. Snead sat down with City Weekly and a black-bean burger at Lucky 13 two nights after the challenge to discuss how he made the impossible possible.

What’s worse, running a marathon or doing the Lucky 13 challenge?


Marathons take months of training beforehand; this was a spur-of-the-moment thing. But this trumps a marathon, pain-wise. I would rather run 26.2 miles straight.

What other Salt Lake City food challenges have you done?


There was another challenge I did just a couple days before this one, at Tenney’s Pizza. It’s a huge pizza. I felt like that was my warm-up for this one. It wasn’t as difficult, and it wasn’t spicy.


It’s strictly for fun. I’ve done two or three. The one big one, you might’ve seen on Man Vs. Food. It’s in Atlanta, it’s a huge 26-inch pizza—11 pounds, five toppings. Two people have to eat that, so me and my roommate—I lived in Alabama at the time—went up to Atlanta. We failed the first time, we had like half of a slice of a pizza left. We won $250 when we completed it, so when I saw that the Lucky 13 challenge was $1,000, I was like, “Man, I’ve got to do this.” I’ve done an eating challenge just to get a free T-shirt or a picture on the wall.

Had you been planning to take this on for a while?


I’m moving really soon for work, and I started coming up with like a bucket list of things I wanted to do before I leave Salt Lake City. I wasn’t sure if I was going to do it on my first try, because I’ve done different eating challenges before where I’ve failed the first time and then tried it again later and did it. I was like, “Maybe I’ll have to come back twice,” but that would have really sucked to have to go through it twice.

How did you prep for the challenge? 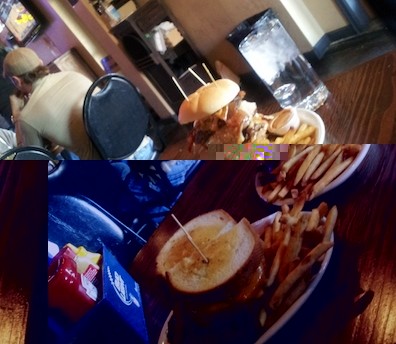 Was the biggest issue the heat or the quantity?


The heat. I finished all the food, minus the peppers, in 45 minutes. Then I just sat there, waiting. I totally could’ve eaten more.

What was your strategy?


I tried biting into it at first, but I couldn’t have the hot mouth the whole time. So I opened it up, got all the peppers out and into a big ball and saved it for the end. I split the peppers up into eight or 10 little segments and took a little shot at time—popped it in my mouth, immediately chugged it down and followed it with water. So really, the peppers didn’t touch my mouth all that much—I was swallowing them like pills. 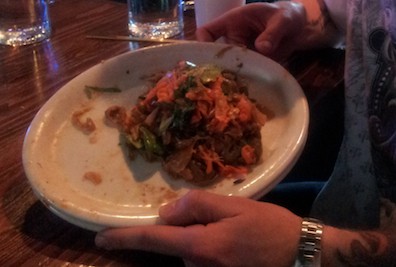 
They wanted me to stay at first, to meet the owner. I’m sitting there for like two or three minutes, and then I’m like, “You know ... I think I’ve got to go.” Made a pit stop back behind the bar, rode home in a daze. Then we got home, I did a little more business. I lay down in my bed and passed out for like an hour, but I woke up again. It just went on and on. It was like 1 or 2 in the morning when I got up and I started feeling better. I kept my contacts in while I was sleeping because I didn’t want to touch my eyes. I washed my hands a couple times, and a few hours later I was like, “All right, hopefully all the oils are off my hands,” but it still stung.

How long before you were hungry again?


The next day, I didn’t eat breakfast, but I worked out. I did feel like I had plenty of energy. I had some lunch, and I ate spicy sushi for dinner. We had Serrano peppers on our sushi, and I was like, “Why did I order peppers the day after doing this?”

Was it stressful to eat so much in front of a crowd?


It wasn’t until I was almost done that people started noticing. I was just sitting back there like a regular patron. Everyone was sitting around eating, and then suddenly was everyone was standing up, watching. Everyone was cheering, it was fun. I don’t know if I would’ve been able to do it without everyone watching. I might’ve just been, “Aw, screw this, this is too much.”

Now that you’ve got this historic victory under your belt, will you be looking for more spicy challenges?


Man, spicy challenges are the worst. It’s worth the money, though. If I saw another $1,000 challenge, I’d have to give it a try. I like challenges, no matter what it is. I want to do an Iron Man, which is 140.6 miles altogether. In North Carolina, there’s the Krispy Kreme challenge. You run—I don’t know how far it is—from the start to a Krispy Kreme shop. You have to eat a dozen Krispy Kreme donuts, and then you run to the finish line. I want to do that—combine my two loves.


Do some more snowboarding, for sure. I came here and picked up snowboarding, and now I love it, and I’ve only really had last season, which wasn’t very good, and this season. 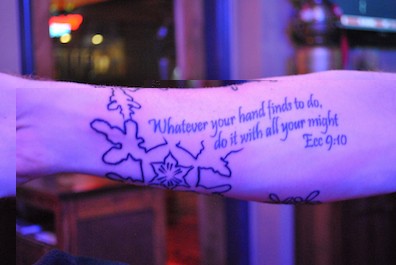 I got this tattoo because I live like this.Â I go to K2 the Church, on 21oo South and 193 West. Â Since I haven't been working recently, I haven't been able to tithe, but I felt led to give a $1,000 offering last month. Shortly after that is when I received my job offer and also won the $1,000 prize.