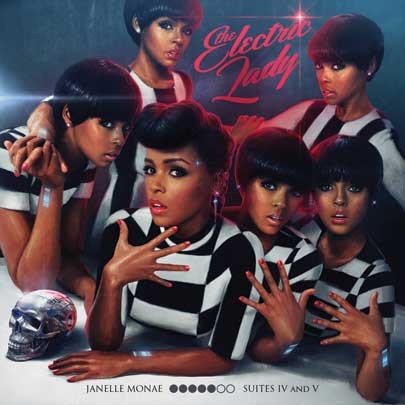 Continuing the adventure story of android alter ego Cindi Mayweather—begun in 2007’s EP Metropolis (Suite 1: The Chase) and epically explored in her 2010 debut two-disc LP, The ArchAndroid (Suites II and III)—Janelle Monáe’s highly anticipated two-disc sophomore “emotion picture,” The Electric Lady (Suites IV and V), is nothing short of a masterpiece. With these 19 songs (not including four bonus tracks), the dapper, pompadour-ed Kansas City-born songstress/producer has cemented her status as a fearless heroine in not only her own story, but the world at large. Inspired by all the exemplary women in her life who encouraged her to pursue her dreams, Monáe says, “An Electric Lady is Quirky, Unafraid, Electric, Epic and Nicety [Q.U.E.E.N]. That’s when you’re being nice and nasty, noble and naughty, all at the same damn time.”

That acronym is also the title of Monáe’s collaborative track with Erykah Badu, a funky, unapologetic anthem that features an infectious chorus—as well as a fiery rap verse—that will hook you and get you dancing. The “Q.U.E.E.N.” lyrics “Even if it makes others uncomfortable, I will love who I am,” sum up the overarching theme of entire album. “Electric Lady,” which features Solange Knowles and lots of sassy horns, continues the album’s get-down feel. The interlude “Good Morning Midnight,” which takes over with a “radio broadcast” from DJ Crash Crash, is a fun break before the stunning, sultry duet “Primetime” with Miguel—showcasing some eyebrow-raising belting from Monáe. Sept. 10, Bad Boy Records. 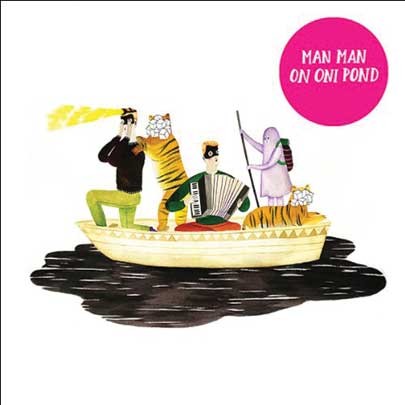 At least when experimental indie-rock band Man Man dishes out the weird, it’s weird with a point. Sure, on their fifth full-length album, On Oni Pond, there is a whole lot going on—multiple instruments, plenty of genre-hopping, tons of random sounds—to the point where upon first listen, it’s easy to overlook an element or three, sort of like it’s impossible to enjoy the scenery when whizzing down the freeway at 100 mph. But the effect is satisfyingly lush, not excessive or grandiose, with a beating heart and pointy, often humorous lyrics that reveal a range of complicated emotions. “This is a strange and beautiful record but it’s also head-on and fearless,” says frontman Honus Honus. “It’s not a record that’s going to flirt with you; this is a record that’s asking you out.”

Most of these 13 songs are very rhythmically driven and danceable, the product of a more prominent presence of drummer Pow Pow in the songwriting process. The album kicks off with the horns- and woodwinds-led instrumental number “Oni Swan,” and its jazzy and vintage feel is an almost comical juxtaposition with the madhouse mood of the following track, “Pink Wonton.” The genius use of pizzicato on “Head On” paints the perfect dreamy, sun-dappled backdrop for the poignant lyrics “Hold onto your heart/ hold it high above floodwaters.” “King Shiv” is what would happen if reggae were turned inside out and rinsed with buzzy synths, and features probably the best line of the album: “Woke up feelin’ like, ‘It puts the lotion in the basket.’” Sept. 10, ANTI-.