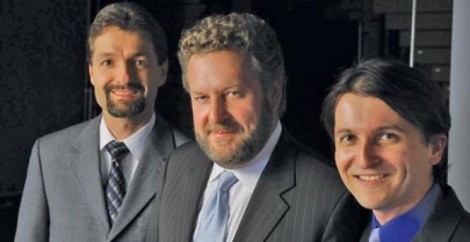 With the ink still fresh on the lease agreement, GAM Foundation—host of the annual jazz series Jazz SLC—is about to be unpacked and settled in a new abode. Aside from the bubble wrap, moving is never fun. But finicky landlords and enlisting every truck-owning friend becomes worth the hassle once moved into that coveted house on the hill—or, in the GAM Foundation’s case, once the best jazz acts in the world start playing the keys, thumping the bass and swinging on the cymbals in the classy grandeur of the Capitol Theatre.

A “house-warming” party will commence Tuesday, Oct. 11, with a GAM Foundation favorite in drummer and trio leader Jeff Hamilton. And unlike other parties, if you spill red wine on the floor, at least the plush carpets are the same color.

“We’re thrilled and ecstatically happy about the move,” says Gordon Hanks, founder and producer of the series. “It’s a great old venue, and I think it upgrades our series quite a bit. The acoustics, sightlines and staging are much better than what we’ve been dealing with for the past 17 years.”

Over that period, Hanks and co-founder Michael MacKay have booked iconic artists Dave Brubeck, Herbie Hancock and Ahmad Jamal, as well as stars from jazz’s next generation such as Brad Mehldau, Joshua Redman and Diana Krall. After an earlier move from the downtown Hilton Hotel, the series was held at the Sheraton City Center since 1999. That contract was not renewed after the powers that be in the hotel administration no longer wanted to play, Hanks says.

Overhead has increased by 30 percent, Hanks says, so they are trying to bring it big this year. Along with Hamilton, guitar virtuoso Frank Vignola, New York Voices, trumpeter Terence Blanchard, Jane Monheit, the Kenny Barron Quintet and the Michel Camilo Latin Trio will grace the new stage.

Hamilton has played Jazz SLC six times previously, with one group or another, in some form or another and at almost every venue the series has booked—those previously mentioned and even Westminster College. “As seasoned professionals, you really try to not let the space affect your set too much; you try to play the venue for what it has to offer,” Hamilton says.

As for the Capitol, it has a far more natural performance space, in contrast to the Sheraton’s flat-floored ballroom designed for the convention set. Now, the seating will be 100 percent assigned—as opposed to the mostly general-admission seating at the Sheraton—and the imbibing will be strictly relegated to the foyer. It is also a significantly larger room, which provides greater flexibility in incorporating diverse groups and styles but perhaps forgoes a bit of audience intimacy.

Having led trios and big bands, Hamilton knows the wide-ranging possibilities that exist in jazz for creating that interaction. “In a trio, the challenge becomes making the audience believe that they are listening to a full orchestra during your shout pieces or ensembles,” Hamilton says. “But there is also an intimacy that you can get down to a whispering dynamic where you can feel the audience gasping, and they are afraid to breathe because you’re playing softly as an invite to join you in the music.”

That is, of course, if the audience is engaged—made rapt by sonic magic. Hamilton sees ongoing jazz education as playing a key role in creating just such an audience. “I think jazz education has played an instrumental—no pun intended—part in building an audience that keeps coming to hear what jazz has to offer,” he says. “I think they might also get a feeling from jazz that they don’t typically get from other kinds of music, and that keeps bringing them back to the shows.”

For Hanks, who now runs the GAM Foundation with his daughter and volunteers, the whole affair has simply become a responsibility to the community to educate and to keep this great art form alive and vibrant. “It’s important because it’s such a huge tent with so many sounds that when you say, ‘jazz music,’ people sometimes aren’t quite sure what that is,” Hanks says, adding that when young people come experience it live, they are blown away by the diversity and musicianship.

That, more than any other, is the one reason why artists like Hamilton love to play here. Still, perhaps now the artists included in the GAM Foundation’s jazz series will not only note the wild applause from the smart, energetic audiences, but also the stylish space that houses it.