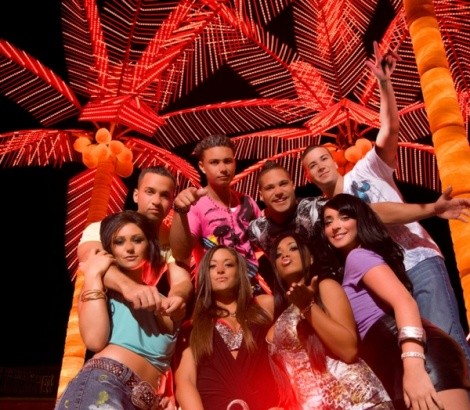 Season Finale: Over so soon? It seems like just yesterday The Only TV Column That Matters™ considered questioning the wisdom of calling a show relocated to Miami Jersey Shore, but then remembered, “Oh yeah, there’s a reason MTV execs are zillionaires, and I can’t even get City Weekly to cover my cable bill.” Jersey Shore has set cable ratings records in Season 2, so of course there will be a Season 3—but who’ll be the “stars”? The Situation, Snooki and Pauly D are indispensable; JWoww and Vinny, less so; Ronnie and Sammi are absolutely useless; Angelina’s finally out for good and has been replaced with a new guidette. If you already knew all of this and it’s not part of your job description to be aware of it, you should be ashamed of yourself.

New Season: Speaking of jobs, I’ve replaced “consultant” with “ghost hunter” at the top of my list of Lucrative Bullshit Careers to pursue when this “journalism” thing evaporates in the next few years/months/ minutes. There are currently 268 spook-chaser reality series on TV right now (about half of them are on A&E); Ghost Lab, following a pair of San Antonio brothers who swindle, er, help folks with their paranormal problems using high-tech gear, just began its second season. Putting aside my vast scientific knowledge—aliens are real, ghosts are not—in the name of turning a fast buck, look for my new venture, Ghost Gitters, in your local strip mall and on A&E soon.

Metalocalypse
Sunday, Oct. 24 (Adult Swim)
Season Finale: Here’s how Season 3 of Metalocalypse played out: Adult Swim ran five episodes in November and December of 2009, then got around to starting the final five last month. Now, it’s not like we’re talking about Mad Men (or even Aqua Teen Hunger Force) here, with some fragile narrative arc that would never survive even the slightest intermission—but nine damned months?! Anyway, the season concludes with Dethklok brutally doublebooked for brutal metal shows in the brutal Middle East, because manager Charles is missing due to a brutal spoiler I won’t reveal. Yeah, brutal.

In Treatment
Monday, Oct. 25 (HBO)
Season Premiere: After 2007’s thankfully canceled depresso drama Tell Me You Love Me, the only other recent HBO series I saw no future in was 2008’s In Treatment—and yet here we are, staring down Season 3. Not due to quality, but sheer time commitment: In Treatment, about a psychiatrist (Gabriel Byrne) and his rotating couch of patients, ran five nights a week (!); each episode is a session with a character on their appointed day of the week. This season, HBO is scaling it back to four Monday-Tuesday episodes a week, meaning there will be only about 40 episodes to keep track of instead 50. Upside: Amy Ryan (The Wire, The Office) is the show’s new therapist-to-the-therapist that Byrne’s Dr. Weston himself sees. Downside: Still 40 episodes.

Dead Set
Monday, Oct. 25 (IFC)
Miniseries Debut: Do we really need another zombie story? When it’s about zombies eating reality-show contestants, oh hell, yes! The five-part British miniseries Dead Set (airing nightly through Friday, all in a row on Halloween) is about a group of contestants ensconced in a Big Brother-esque reality house who are unaware that, outside, their country has been overrun with zombies—until they’re evicted from the show, that is. Despite the setting, Dead Set isn’t a Shaun of the Dead-style comedy; it’s straight horror-drama (with fast zombies, not classic shufflers—purists beware). Well done, but too bad that AMC’s The Walking Dead is going to completely blow it away on Halloween night.