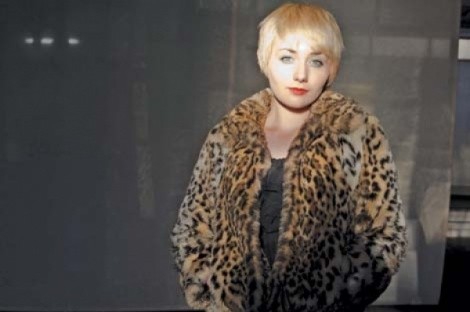 Jessica Lea Mayfield turns up the radio as she drives a 15-passenger van through the Southwest desert, tuning in to “E.T.” by Katy Perry, featuring Kanye West. She relates this scene by phone at an Arizona truck stop.

“That’s hilarious. I love it. I think everyone in the van can pretty much agree that being able to hear that on the radio is amazing,” Mayfield says with a laugh.

She’s had copious hours listening to the radio as a touring musician since she was 8. Recently, though, she’s been digging gaudy pop-rap and Top 40 country—music as divergent as the 21-year-old soulful songstress herself.

Nicknamed “Chittlin,” Mayfield began her musical life in her family’s Ohio-based bluegrass band, One Way Rider. She kickstarted her solo career at 11 and wrote vulnerable lyrics since well before Dan Auerbach of The Black Keys sought her out in 2005, when Mayfield was just 15. Auerbach produced her past two albums, Tell Me (2011) and With Blasphemy So Heartfelt (2008). She’s currently a rising star in the alt-country world.

It might not seem like Mayfield, Katy Perry and Kanye West share much in common, until you look a little deeper: It’s that they all just don’t give a damn.

“I have that same mentality of saying whatever I want. I really respect that in pop music,” Mayfield says. “Good or bad, they come up with different ways to say the same goddamned thing a thousand different ways.”

That carefree attitude can leave her musings open to interpretation, which is done poorly by many listeners and critics, she admits. Tell Me, she says, isn’t as much about relationships and love gone awry as it is about “swings.”

“Mainly, a lot of it is singing about a boy who came on too strong, and me having my own issues,” she says. Many of the songs are about particular feelings. Mayfield turns each emotion into an object that she sings to and about, rather than directing the attention onto, say, a particular boy.

“I definitely write with the mindset that if I feel like I [initially] can’t sing it, then I have to, because other people can relate to it, and it makes them happy,” Mayfield says. Her skills shine on songs like “Run Myself Into the Ground,” “Trouble,” “Nervous Lonely Night” and the fake-happy song her brother wrote, “Blue Skies Again.”

Comparisons to Bob Dylan and Lucinda Williams are off the mark, she says. For one thing, she can’t name a song by either artist. Same with those unwanted monikers, she says. “This whole ‘Queen of the Dark’ and ‘brooding’ stuff is ridiculous. I write sad songs, OK, but I’m not Ozzy or something.

“I feel really broken and beaten by what people say. It feels like what people will say about you is whatever they want, not what’s actually going on,” Mayfield says. “Before people even meet me, they have preconceived notions.”

What’s really behind her music on Tell Me, then? Her progressions and lyrical stylings ring sweetly true to her deeply ingrained bluegrass roots. Her dog is even named after bluegrass legend Doyle Lawson. Her cadenced singing sounds like heavy boot stomping down a busy street, but her crooning is somehow reminiscent of early Dolly Parton. Mayfield admits to having a minor obsession with the band Alabama, and simultaneously with the late Elliott Smith; both subtly creep into her music. That’s a mixed bag of influences nearly as incongruous as Perry’s “E.T.”

So, leave any preconceived notions behind before seeing this young troubadour in concert, and just be ready for something relatable and uncensored.