Who came up with our popular image of Jesus? 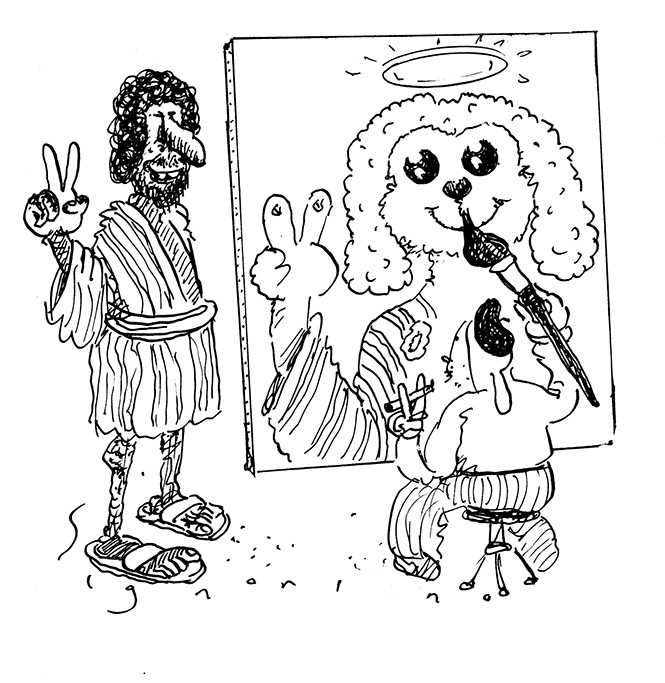 Where did the modern depiction of Jesus come from, and when? —Ryan Copper

You could be a little more specific, Ryan. Maybe the depiction you're thinking of is a version of what's called the Divine Mercy image, showing a very white Jesus with puppy-dog eyes, that originated in the 1930s. Or maybe it's the somewhat more rugged fellow seen in Head of Christ, from 1940. But yes, either way what you're talking about is a clearly European-looking Jesus—fair-skinned, light-haired, blue-eyed, his softly handsome demeanor suggesting a teen idol, if a serious-minded one. You'd figure a guy like that would have been a real sore thumb in first-century Judea. So where'd we get the idea that that's Jesus?

Well, it sure wasn't from the Bible. You can read the Holy Writ cover to cover, Old Testament and New, and you're not going to find any usable info about what Jesus looked like. In Revelation, the triumphant Christ is described as being white in color, true, but he's also said to have white hair, fiery eyes, and feet of burnished bronze. Prophets who describe the coming messiah also mention whiteness, but similarly this seems to be an indication of his purity rather than his complexion.

We don't have any historical documentation of Jesus' appearance either—at least none that's authentic. There's a letter, widely reprinted in Renaissance Europe, attributed to one Publius Lentulus, purportedly a Roman governor of Judea who lived in Jesus' day, describing him to the Roman Senate as radiantly handsome, with wavy red-brown hair, rosy cheeks, and bright gray eyes. But the letter's a fake, dating back no further than the 1400s. (This is around the same period when the Shroud of Turin first surfaced to provide alleged evidence of Jesus' facial features.)

Nor did the earliest Christians leave behind any useful renderings of Jesus. Read broadly, the Second Commandment forbade "graven images," and anyway scurrying through catacombs to avoid persecution was hardly conducive to the production of fine art—Jesus was represented, if at all, in scrawled symbols of Xes and fishes. And when his followers debated about his physical appearance, they didn't necessarily consider him to have been a looker. Early Christians may have understood Jesus as a shape-shifter: in the Apocryphal text Acts of John, he simultaneously appears to one apostle as a bald guy with a thick beard but to another as a scraggly bearded kid. The early theologian Tertullian, quoting Isaiah ("He had no form nor comeliness"), presents Jesus as unimpressive-looking at best, perhaps even disfigured. In a second-century work, the scholar Origen seems to imply that pagan critics had razzed Christians for their funny-looking god.

Over the ensuing years, though, theological arguments began to surface insisting that Jesus must be beautiful, as a proper physical representation of the divine. Images of Jesus began drawing on classical models of beauty and grace. Pre-Renaissance artistic renderings already show him as unmistakably European: a fresco by Pietro Lorenzetti from around 1320 has a light-haired, light-bearded Jesus being taken down from the cross. Which—in addition to the little fact that's there's no support for it—is why we can dismiss the story you'll see tossed around in which the emergence of Euro-Jesus can be traced to 1490, when Pope Alexander I supposedly ordered a purge of all depictions of Jesus as Semitic-looking and commissioned a number of influential replacement paintings using his son, Cardinal Cesare Borgia, as the model. In reality, a white Jesus had established his foothold well before.

It's hardly shocking, then, that when a 20th-century mystic, the Polish nun and future saint Faustina Kowalska, reported in 1931 that Jesus had revealed himself to her in a vision, the figure she saw matched the longstanding consensus view of his appearance. Under Sister Faustina's direction, a painter named Eugene Kazimirowski produced a likeness of a light-skinned, light-brown-haired Jesus with right hand raised in benediction, his left drawing aside the robe over his heart, from which emanate beams of red and white light. Hung in a chapel in Vilnius and known as the Divine Mercy or the Merciful Jesus, it went over big enough to inspire adaptations by subsequent artists who widened the eyes to more doelike proportions. Eventually, reproductions of the various Faustina images became notably popular in Latin America, meaning they're often encountered in the U.S. too.

Meanwhile Head of Christ, by Chicago illustrator Warner Sallman, entered public awareness at right around the same time. With his imposing brow, this Jesus has a little more of a red-blooded look, and it apparently struck a chord in WWII-era America; the Salvation Army and the YMCA handed out wallet-sized cards to countless soldiers, and within four years of taking on the job Sallman's publishers had printed 14 million copies. All told, maybe half a billion Head of Christs have rolled off the presses to date.

None of this, of course, addresses the question of how accurate these images likely are, or how non-European the historical Jesus' features might have been. We won't sort it out now, but it's safe to say that sticking to a stricter reading of the Second Commandment's no-graven-images policy would have avoided a lot of disputation down the road.