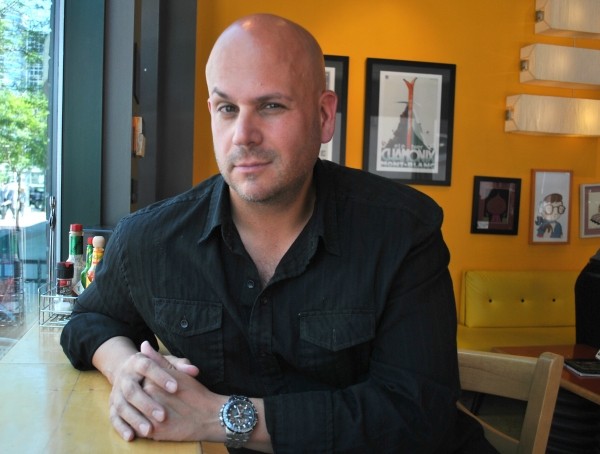 Writer/comedian John Moyer, who wrote the screenplays of popular LDS films The Singles Ward and The R.M., recently produced Disjointed Custody, a four-minute dark comedy. The short film—directed by Christian Serge and starring Moyer, his son and Utah actress Britani Bateman—was inspired by Utah’s mandatory divorce class for couples who have children, and the effect divorcing parents’ bitterness can have on their children.

How did a divorce class become your inspiration?

If you go through a divorce in the state of Utah, they require anybody with children to take a three-hour divorce class. For me it was interesting, because I actually have a fairly amicable relationship with my ex-wife. But everybody’s there in the class sharing stories and making comments, taking shots at their ex, and there’s a lot of trash talk that goes around. The videos we had to watch in divorce class—some of them are like 20 years old. And most people in that class, they’re texting, not paying attention, making jokes to the people next to them. My impression from the people who were around me is they’re obligated to take that class, but they don’t want to be there. And I have friends who’ve gone through divorces, and people are saying things in front of their kids … it’s like it’s a contest between the two parents to try to get affection from their kids. I just had this idea for a short film, and thought, “What if this could drive home that message and say something?” That was where it all began.

It took me like 2 Â½ years to actually do the video. It was timing, and I’d become good friends with Christian Serge, the director of photography on a television show [Dining With the Dean, a cooking reality show] that I’d produced last year, and I told him, and he was like, “Let’s do it.” Then Britani Bateman agreed to jump in as well, we put it all together and made it happen.

Why’d you decide to go with a dark comedy rather than an earnest, after-school-special film?

It’s interesting to see people watch the video, because they’re laughing all the way through it, but then in the end, there’s a 180, a shock. People are like, “Is this a comedy?” As a whole, no, it’s not. Parts of it are comedic, but it’s a very serious message; I consider it to be a very serious piece. The comedy is kind of the proverbial Trojan Horse that gets people to let down their guard. They’re laughing, and they get into this, and then they don’t expect to see where it goes in the end.

That’s what I want, is that end reaction where people go, “Wow, holy shit.” The film is not literal, but it says, “This is what people do; you put [your kids] in a situation where it kills them inside.” And what I want people to walk away with is … taking the selfishness away, taking the blinders off, and realizing that you have a child with somebody, and you need to work together to make sure that that kid doesn’t get screwed up. Obviously divorce is hard no matter who is going through it, but you have a responsibility as a parent—maybe even an extra responsibility as a divorced parent—to make sure that what you do doesn’t damage your kid.

Your young son is in the film, which does take a shocking turn—how did he handle that?

He had no idea what was going on. That was something that I was really conscientious of. He wasn’t there for the close-up shots of Britani and I [arguing] … we would film stuff of him, and while we were filming him, I’d say, “Look at me, and give me a puzzled look. Now look at Britani and give her an upset look.” He wasn’t there during any of the bickering. He hasn’t seen the movie, and I’m not going to show him the movie. His comment at the end was, “I don’t know what was going on, I don’t really understand.”

What have you been up to since the heyday of Mormon cinema?

The last [film] I did, Mobsters & Mormons, was essentially my way of wanting to try to have, for better or for worse, complete creative control over a film. Since then, I’ve been hired to do screenwriting, a lot of stand-up comedy. The comedy is the thing I love the most, the performance aspect. I perform at Wiseguys. I’m usually at every one of their clubs every six months or so. And I go around to clubs across the country. That’s what keeps me the busiest. I’m not so much inclined to say I want to go out and produce another feature-length film or direct, because it’s a strenuous thing—and I’m lazy. I would like to sit at home and write. If somebody wants a screenplay, you want writing done—great. That I can do.