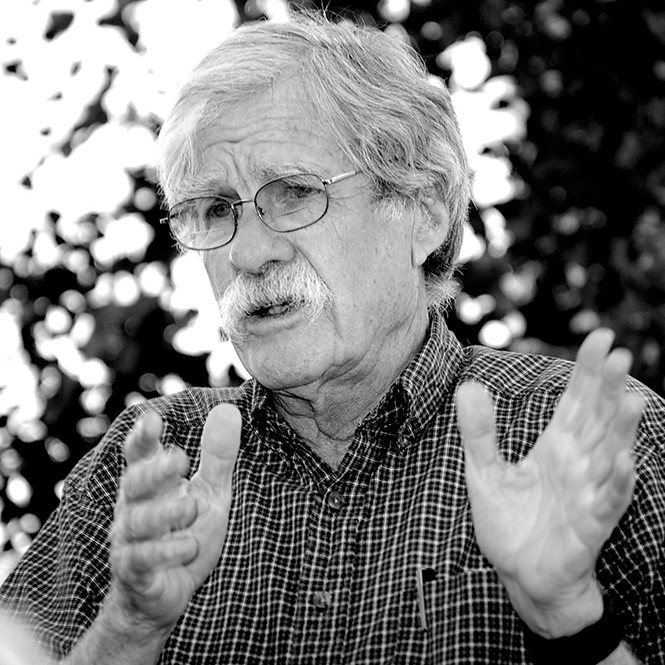 In three-minute bursts of clarity, comedy and environmental wisdom, John Worlock's Wasatch Environmental Update has infiltrated Utah's public-radio airwaves at 2 p.m., most every Sunday, for the past 13 years.

Like a tireless piston in an engine that won't quit, Worlock, 84, has attacked his volunteer position with a consistency and precision that leaves listeners, admirers and radio veterans impressed. Employees at KRCL 90.9 FM, which broadcasts Worlock's piece, know the weekend is near when the gray-bearded Worlock enters the building at exactly 4:30 p.m. each Friday to record his segment.

"His dedication is really what strikes me," says Amy Dwyer, development director at KRCL. "I don't think he has taken weeks off. There are occasional weeks where we have to ask him to take a day off. He's like clockwork; it's really impressive."

If the central Wasatch Range and its three wilderness areas have a voice, it is that of Worlock's.

In 2002, Worlock and his close friend, Save Our Canyons founder Gale Dick, were asked by KRCL to produce a radio segment.

At first, Worlock remembers it was to be a brief question-and-answer format between himself and Dick, but the duo couldn't carry on a radio-friendly conversation. "It turned out that Gale and I have a very different idea of how conversation goes," Worlock says, remembering that Dick would ask a question "that he thought was leading to something, and it would just floor me. I couldn't respond." Later, Dick stopped doing the show. "He just kind of slowly slipped out of it, and they asked me to continue. I've done it solo," Worlock says.

Worlock attempts to keep the focus of his report on issues facing the much-beloved jagged teeth of mountains that sit between Salt Lake City and the Point of the Mountain—the central Wasatch. But occasionally, in his search for material, Worlock lends his voice to other environmental battlefields, such as protection of the state's rivers and deserts.

There's Only One Wasatch
Update Required To play the media you will need to either update your browser to a recent version or update your Flash plugin.

The prime benefactor of Worlock's time on the air is his sponsor, Save Our Canyons, for which he serves on the board of directors and sometimes consults for material.

A close friend of Dick's, who died in 2014, Worlock came to Utah in 1992 after retiring from a physics research career in New Jersey. The two men had met in "nineteen hundred and fifty-three," as Worlock says, in graduate school at Cornell University.

By the time Worlock arrived in Zion, Dick had founded Save Our Canyons to combat the construction of Snowbird Resort's bomb-shelter-like concrete buildings.

In response to development pressures in the Wasatch, Worlock says Save Our Canyons fought hard for implementation of Salt Lake County's Foothills and Canyons Overlay Zone, which dictates how development can unfold in these areas.

Over the years, Worlock and Save Our Canyons have battled individual development projects, expansions of heli-skiing, resort growth and routine efforts by the seven ski resorts in the central Wasatch to connect all of the resorts by trams and chair lifts.

"We've been involved in a number of escapades, and it always looks as if we're trying to keep things from happening, which is just about right," Worlock says.

Speaking into a recording machine all alone at KRCL studios, Worlock says he doesn't know for sure if his three minutes per week have any impact on the people who hear his program, or on the program's subjects.

But Save Our Canyons, he says, is an "essential" component to keeping development interests, and the governments charged with regulating them, in check.

Worlock says he views some environmental losses as victories—if for no other reason than Save Our Canyons managed to delay development processes by raising its concerns. "The other point of getting into these fights is that they know we're watching," he says. "Sometimes I think that will keep people from trying to do things that they shouldn't do just because they know we're going to fight them."

The Lorax
Update Required To play the media you will need to either update your browser to a recent version or update your Flash plugin.

But Worlock isn't all fight. Many of his most recent segments have dealt with informing listeners of the latest news from the Mountain Accord process—an endeavor by multiple cities, environmental groups, ski resorts and government entities to reach some agreement over the central Wasatch's future. He's also interviewed The Lorax, a Dr. Seuss character who spoke on behalf of the environment as industrial progress decimated a world [on that day, Worlock spoke as himself, the Lorax and the narrator, reading passages from the book], and has reported a Christmas Eve invasion by a renegade St. Nick who smokes indoors and stays warm under the fur of endangered species.

Whether the topic is serious or fun, all agree Worlock has become a master craftsman on the radio.

"It's kind of his thing," says Carl Fisher, executive director of Save Our Canyons. "We've turned him loose on it. He loves doing it, and I think it's a great service that he provides to the people of the Salt Lake Valley, to give them a quick snippet of the goings-on on issues affecting our environment."

Worlock's ability to concisely dispatch reports on complicated subject matter has put more than one reporter (this one included) to shame. And his voice—deep, deliberate and soothing—is as natural as his talent for radio.

"It was just never hard," Worlock says, of getting used to radio. "It just seems like I have a good voice. People said that right from the beginning, and it seems to be recognizable."

But Worlock works hard to find the right subject matter. On weeks when material is scant, he begins to fret. By a writer's standard, his task is unenviable: take a topic and dice it up into 376 words that sound good to listen to.

Christmas Eve Invasion
Update Required To play the media you will need to either update your browser to a recent version or update your Flash plugin.

"I think people mistakenly believe that presenting a few minutes of environmental perspective can be done on the fly," says Zach Frankel, executive director of the Utah Rivers Council. "But in truth, it requires a lot of preparation, especially for someone like John who, this isn't his job, he's not paid to do this."

In the recording booth, Worlock says he's learned to edit his own segments, removing his extended breaths, which he says look like "rat tails" stretching across the screen, to buy more time for his words. "It's three minutes long," Worlock says. "That means you don't get to say much, so you better choose wisely."

Worlock traces some of his radio IQ to his love of reading aloud to his children—a pastime he recalls enjoying so thoroughly that he was a bit disappointed when his children grew old enough to read on their own.

But his children's loss is Utah's gain, as Worlock has amassed a body of work that, combined, stretches for a day and a half and is a full-voiced ode to wilderness in a world where the religion of growth often comes at the expense of nature.

"What John has done is an immense level of service," says Frankel, whose organization's efforts are occasionally aired by Worlock. "We're talking about over a thousand hours of environmental commentary. It's critical to Utah's future and everyone owes him a debt of gratitude who enjoy Utah's great outdoors."

Worlock, who has no intention of ceasing to read any time soon, will be at KRCL this Friday afternoon as surely as the granite peaks of the Wasatch will be standing watch over the Salt Lake Valley.

"They're there, they're always there," Worlock says of the mountains. "And you can count on them."