Johnny's On Second: The Entertainment, The Poker & The Bloody Alien

July 01, 2010
4 comments
Bar of the Month: Johnny’s On Second
Lost Art Tattoo and Poolhall Junkies used to sit in the spot where Johnny’s on Second (165 E. 200 South) has now taken root. It’s a bar where proprietor Johnny Dale wants to “keep you entertained while you’re having fun.” He does that by providing a great patio for Sunday sipping and consistent poker action, presented by Wasatch Poker (WasatchPokerTour.com). Mondays, Thursdays and Sundays, the 1,000-chip hands are dealt starting at 8 p.m. and continue until closing time. Sundays, the poker begins at 2 p.m. There aren’t any buy-ins, but there are winnings in the form of bar-tab certificates. The next time you’re a block north of Broadway, stop by one of the better neighborhood bars downtown.


Johnny’s Best Bartender: Camie Powers and her “Bloody Alien” Drink
Powers has one of the best drink libraries of any bartender in town and is well-liked at venues all over the city. She has a few libations of note, but we recommend trying The Bloody Alien at home for some sweet and intoxicating tastes, and if you don’t have access to the huge liquor list required, stop by Johnny’s Sunday nights for the alien made by Ms. Powers herself.

Serve on ice. Drink two in a row and you’ll be communicating with extraterrestrials in minutes. 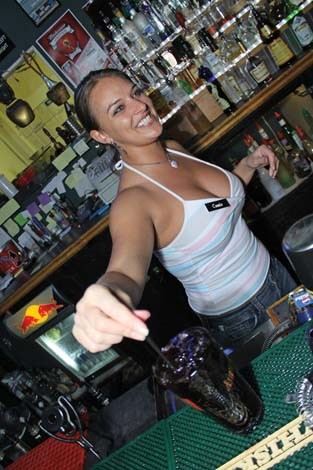