Joshua James spent the better part of the last two years promoting his 2007 release The Sun is Always Brighter, an album that hinted at his potential to become one of this generation’s stronger voices. But, while Brighter took a hard look at life—warts and all—it lacked the serious bite that Build Me This (Northplatte) offers from the get-go, with foot-stomping opener “Coal War” culminating with James’ tortured yowl: “It’s not the hand that cuts/it’s the hatred deep inside!” Album art for the new release (available on vinyl and CD Sept. 22) features a striking, almost-primal photo of James covered in white body paint, and the music is equally powerful. The Nebraska native/Utah resident is coming across stronger and more resolute in his beliefs while still tackling questions of faith. James’ current tour includes two special homecoming shows at Provo’s all-ages gallery, beginning tonight with an acoustic set. Tomorrow, he’ll perform with a full band. Velour, 135 N. University Ave., Provo, 8 p.m. All-ages. Tickets: 24Tix.com

The recent death of John Hughes inspired more than a few souls to create mix-tapes—OK, mix-CDs—with songs from the writer/director’s iconic films, including Ferris Bueller’s Day Off (Yello’s “Oh Yeah”) and The Breakfast Club (Simple Minds’ “Don’t You Forget About Me”). Of course, the Psychedelic Furs factored heavily on everyone’s playlists. The British new-wavers helped ratchet up the angsty young suburban ennui in Pretty in Pink with the title track to the Molly Ringwald vehicle. In fact, the Furs’ catalog could launch a dozen new Hughes projects. Their ability to craft emotionally provocative, cinematic tunes is uncanny—a skill largely credited to the Butler brothers who, when the group split, formed Love Spit Love. The Furs are back together and performing tonight with Manchester’s party boys Happy Mondays, minus dancer Bez who now plays in Domino Bones with his tambourine (and members of Stone Roses). In the Venue, 579 W. 200 South, 8 p.m. Allages.
Tickets: 24Tix.com

Sunday 9.13
WAVVES
As most rising indie bands can attest, the Internet is a double-edged sword. It giveth and it taketh away with knee-jerk zeal. Take Wavves, for example, a San Diego-based lo-fi, fuzzed-out pop group touted as the Next Big Thing before great expectations and an exhaustive tour schedule led to a very public meltdown in Europe. Mayhap we should give these young artists a chance to fully develop before we start throwing around hyperbolic praise/brutal criticism. Their self-titled LP is out on Fat Possum, home to current greats Heartless Bastards and A.A. Bondy. Trust the label and check out Wavves for yourself tonight. Slowtrain, 221 E. Broadway, 5 p.m. The Urban Lounge, 241 S. 500 East, 10 p.m.

YEAH YEAH YEAHS
It’s hard to imagine a world without Yeah Yeah Yeahs. We came this close to experiencing that glum reality when the New York City rockers considered calling it quits following the mixed reception of Show Your Bones (2006). With the release of their latest record, It’s Blitz, some long-time followers are crying foul and claiming they wouldn’t mind if Nick, Brian and Karen threw in the towel. But, come on—yes, YYYs are traveling farther and farther away from the dirty sound that colored their first few albums, but the slick new sound of songs like “Heads Will Roll” is still infectious and cool. Plus, they still absolutely rule in a live setting. We’ve witnessed their potential to throw a real barn-burner (DV8, 2004) and you don’t want to miss that again. In the Venue, 579 W. 200 South, 7 p.m. All-ages. Tickets: 24Tix.com

THE BELLEVILLE OUTFIT
Satisfy your fiddle fetish with new-school old-time players The Belleville Outfit. Based out of Austin and featuring members from various Southern pockets, the sextet’s eclectic sound is smooth as sweet tea and lively as an added dollop of whiskey. The Americana group’s Time to Stand (dedicated to slain journalist and musician Daniel Pearl) combines hints of bluegrass, country, gypsy swing and bluegrass with sparkling male/female harmonies to propel an album composed largely of original material (and funded by listeners who chose to “adopt a song” in exchange for credit in the liner notes). The State Room, 638 S. State, 8 p.m. Tickets: TheStateRoomSLC.com 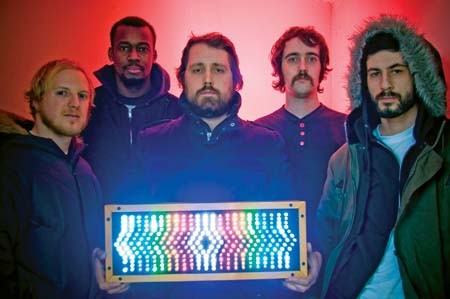 ROYAL BANGS
Typically, Dan Auerbach is the first name that pops up in reference to The Black Keys, and no wonder: his 2009 solo debut Keep It Hid is stunning. But, Patrick Carney hasn’t exactly been twiddling his thumbs while his Keys mate rides the buzz train. The Akron, Ohio, native formed Drummer (a drummer supergroup). He also stumbled on Royal Bangs, re-releasing their 2006 effort We Breed Champions on his Audio Eagle label. The album is a fine example of the group’s highly percussive hovercraft pop-rock powered in part by electronic wizardry. Carney has good taste. Royal Bangs have been winning over crowds with their energetic live show—will you be the next to fall deep? Burt’s Tiki Lounge, 726 S. State, 9 p.m.