Down on the farm with local crooner 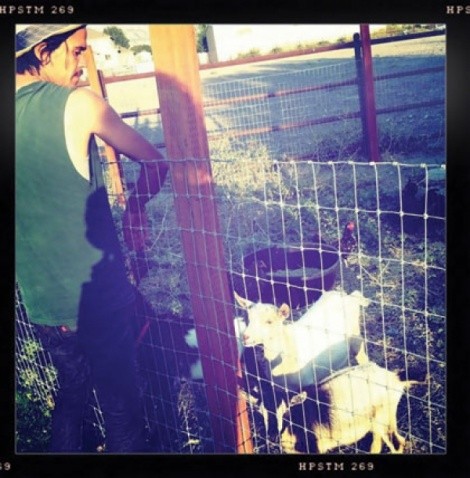 Joshua James’ abode in American Fork is a McMansion, of sorts—a fairly luxurious space for a humble songwriter. Walking up the steps to the door, it seems too suburban, too family-like—except for the sound of a goat bleating. Around back, there’s a huge garden, along with goat and chicken housing.

The home serves as the base of operations for Northplatte Records—co-owned with McKay Stevens—with James’ home office and a recording studio both there. The label’s most recent releases—Desert Noises’ Mountain Sea and Parlor Hawk’s Hoarse & Roaring—were recorded in the three upstairs recording rooms.

But business matters for the label took a back seat during the late summer days just before the singer-songwriter left for a national two-month tour. City Weekly couldn’t connect with James the day before he left, as planned, because some domestic issues needed addressing.

“Shearing the goat took way longer than we thought,” James says, with a laugh, from the road. He and his wife, Emily, spent their remaining hours together dealing with the wool and canning tomatoes. “We wound up with about 200 quarts of food, and it’s all over the house,” he says.

James has plans to record with at least one artist this fall and winter; imagine them laying down a song’s drum track with a case of tomato sauce at their feet.

“I really love making a record with people—really taking time to help someone make their songs the best they can and finding where things sit best, because there’s a hundred different ways you can make a song,” James says. It’s building and deconstructing; it’s sowing and reaping.

“It’s a lot easier to do on other people’s songs than my own. Because you live so close to your own, it’s really hard sometimes to step back,” James says. He speaks from recent experience. He ventured to Cottage Grove, Ore., for two weeks to record with Richard Swift—The Shins’ keyboardist. Following up on the 2009 release Build Me This, James’ third album is now nearly complete; the tracks will be mastered in January 2012—once both he and Swift are done with their various fall tours—and released in mid-2012.

“It’s not super different from my other stuff, although this batch of songs feels a lot more cohesive because they were written in close proximity to one another,” James says. Stylistically, the album doesn’t diverge from his well-crafted formula, either. His textured tunes roll out of themselves organically, naturally, like they were made from the soil in his backyard. The vocally driven tracks offer James’ raspy, soft croon that, at times, seems almost silky. And his lyrics range from capturing sentiments of love and loss to delving into the esoteric.

Regarding the latter, James spins a good yarn, if it’s for a song, or not—like on his blog, WillametteMountain.tumblr.com. There, he waxes poetic and chronicles his current travels, the Ten Buck Tour, which takes its name because the gigs require only an Alexander Hamilton for entrance. He’s touring with husband-and-wife folk duo Honeyhoney, and they are trying to keep costs down in this struggling economy, he says.

“Some of the shows have been $12, though. I even talked to my manager about it; it seems a little dishonest,” James says.

It’s obvious that he believes in fairness and community, and those beliefs are essentially the founding pillars of Northplatte Records. “From day one, it was all about creating a group of friends who can support each other musically. It is so much more about the community of it than making a bunch of money and seeing this thing blow up,” James says. He seeks deep connections across his life. The feeling he gets when he sings a song, or plays a show, or talks to someone afterwards—that human-to-human bond—is the main reason why he plays music and writes, he says.

Food is kind of like that. Both involve planning, preparing, nurturing, sharing and so on. James grew up in Lincoln, Neb., with five brothers and sisters, and his parents bought cost-efficient, bulk items. It wasn’t till later in life, when he moved to Utah in 2001, that he became passionate about gardening, food preservation and homesteading, which were inspired by his grandfather in Provo.

“Being connected with something like that, well, it’s that connection that I love. Although growing food is more personal, there’s a huge parallel between it and how I connect with music,” James says. “Those are the two things that I really love, and they are the biggest parts of my life.”