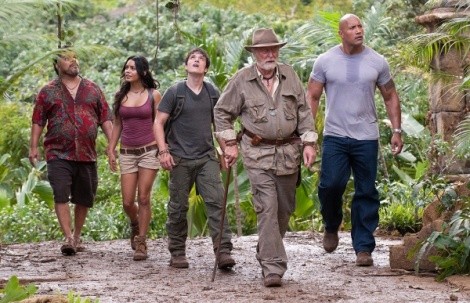 Before diving into the multifaceted characterizations and thorny metaphysics of Journey 2: The Mysterious Island, this important disclaimer: I never saw the 2008 Journey to the Center of the Earth. Somebody please inform me if that renders me incapable of appreciating the subtle subtextual nuances.

Here’s why I feel at least somewhat safe in evaluating the follow-up unencumbered by knowledge of the predecessor: The Hollywood sequel has generally evolved to the point where specifics of previous installments are irrelevant. This isn’t just another tirade against the whole idea of sequels; that particular barn door has long since been left wide open, and grousing about movie sequels is about as controversial a conversation starter as “aren’t puppies cute?” or “wasn’t Hitler a pretty bad guy?” But sequels in general, at least, used to be about allowing viewers to re-connect with well-liked characters. Journey 2 continues a trend in action blockbusters that used to be seen only in assembly-line horror franchises: Hike up the numeral, and make everything else as generically familiar as possible.

In this case, that means the 2008 Journey’s lead actor, Brendan Fraser, won’t be returning with us for this voyage. Dwayne Johnson—whose new career path seems to be continuing franchises he didn’t start—takes Fraser’s place, playing Hank, the stepfather of Josh Hutcherson’s Sean from the original film. Sean is still pursuing the “Vernian” theories that have been a family obsession—the notion that all of Jules Verne’s fantastic tales were actually nonfiction. So when Sean intercepts a coded message that he believes to be from his grandfather, he and Hank head off to the South Pacific to charter a helicopter into an uncharted region, eventually crash-landing on a mysterious … well, it’s right there in the title.

Director Brad Peyton—a veteran of the unnecessary 3-D action sequel Cats & Dogs: The Revenge of Kitty Galore—and his screenwriters are clear about exactly how to build the formula elements into Journey 2. The comic relief is provided by Luis Guzmán as Gabato, the helicopter pilot who wanders around being scared in a high-pitched voice like this group’s Shaggy, making Mysterious Island feel more like The Mystery Machine. The whiff of respectability is provided by Michael Caine as Sean’s adventurer grandfather, who gets to spar playfully with The Artist Formerly Known as The Rock.

Romantic interest/youth appeal comes from Vanessa Hudgens as Gabato’s daughter, whose defining character trait is being uninterested in the puppy-dog attentions of Sean before being interested in them. And just so that it’s not all about people running away from giant lizards or flying away from giant birds, we get the strained attempts by Hank to be a much-needed male role model for Sean, including that time-tested male-bonding technique of performing on the ukulele.

Given the high level of monotonous sameness, it probably seemed to make sense to the filmmaking team to slam everything into high gear right away, taking as little time as possible to get from Sean’s suburban moping to the narrow escapes and dangerous beasties on the island. A frenetic pace provides distraction from the absence of an actual story, or from the possibility that folks might stop and wonder why our heroes creep precariously over the top of giant lizard eggs only until the angry mama wakes up, at which point a broad path magically appears. But it’s frustrating to sit through yet another movie in which no one appears to care that adventure works best when the biggest investment isn’t the special-effects budget, but the audience’s investment in the people running from the digital dangers.

At the very least, Journey 2 is smart enough to get some old-school pop out of its use of 3-D, ranging from spears thrown directly at the screen to the berries that ricochet off of Johnson’s impressive pecs as though his nipples had turned into machine guns. That provides some uniqueness in what is otherwise an example of Hollywood’s marketing machine turning sameness into a virtue. The routine that has allowed Johnson to step into The Fast and Furious and G.I. Joe series is part of making sure that a sequel isn’t just a sequel to one particular movie. They want it to feel like a sequel to every movie.