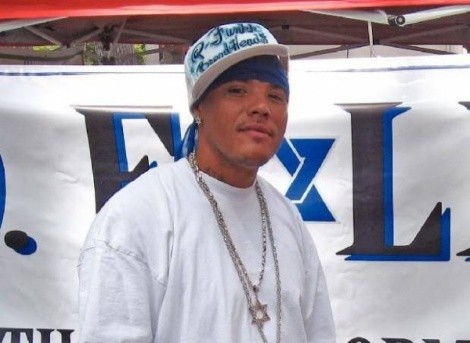 Under the banner of the Gangster Disciples organization, J.P. Delli hosted a booth at the Native American Celebration in the Park on July 24 in Liberty Park to generate a positive image for the group. In Delli’s view, the initials “GD” stand for “growth and development.”

What are Gangster Disciples?
We’re trying to do something positive with GD folk—we call it “growth and development.” We’re just trying to get out and be with the people in the Salt Lake community, and just have fun with it. I like to draw, and so I’m selling these airbrushed shirts here. We’re in this festival because we come from a negative background, and, you know, we’re just tryin’ to do what we can. A lot of us are former gangbangers, and we want to do everything right that we can, keep things on a positive level, and try to serve our community and be a part of it.

So, GD includes ex-gangbangers and gangbangers alike?
Well, you know, I’m still from the neighborhood. But we got these young stupid kids, and I’m just trying to take away from the negative perspective and show that no matter where you’re from, you can be a positive force for something good.

And you sell ice cream?
We got our ice cream truck called GD; we call it “good and delicious.” It’s basically a low-profitable ice-cream business we do, selling Otter Pops for 50 cents and selling other products to the community cheap, especially during the recession. We also do music; we got a little record label, so all our friends that like to rap and be musicians or whatever can record and get their music out.

How many Utah members does GD have?
Oh, you know, GD has maybe about 80. But as far as what we’re doing, it’s really just us here. We’re trying to set an example for them. We’re like renegades, so to speak, outcasts.

What advice do you have for those growing up in a negative environment?
The pivotal moments are crucial because fear steers you toward the wrong. I would just tell them, “You wasn’t born negative.” Some of them say, “My mom gave birth to a negative individual, I’m out of luck.” But that’s not true. Be a leader, go where you want to go. Everyone has a dream, things they like to do. I like to draw, for example. You shouldn’t fear doing something positive and being ridiculed for it. I mean, they ridiculed Jesus—and look who he was, the greatest man on Earth. So, that’s what I have to say: stay positive.