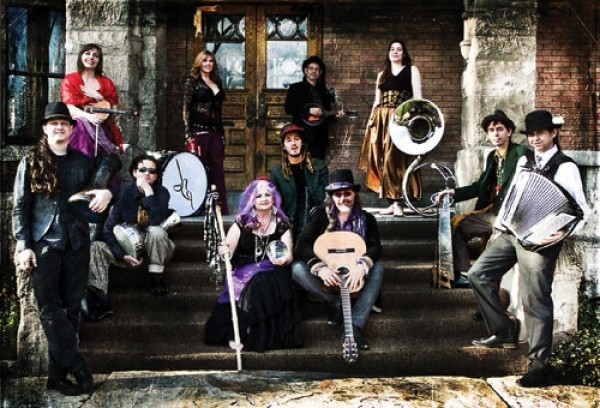 The origin story of the name Juana Ghani could be considered open to interpretation. One version guitarist/vocalist Brian Bonell tells is that while he was a down & out merchant marine in Europe, “wandering the streets lost and alone,” he says, “wondering where my next meal would come from, wondering where my next day would take me,” he came across a fortuneteller who cryptically told him, “Juana’s in your future, Juana, you have to find Juana.”

But in a more real sense, the name “wasn’t something that we really did too much searching for,” Brian says. “It’s kind of like the music that we play: It came to us.”

The tale of Brian meeting a mysterious woman who knew his future may only be a fantasy, but such is one of the central themes in the music made by the Salt Lake City acoustic gypsy-punk band, including on their new full-length album, She Lost Her Head. “We like telling stories, and the best stories always have that blurring of truth and dreamlike fantasy to them,” says bespectacled, purple-haired lead vocalist Leisl Bonell.

Juana Ghani originally formed as a duo project between Leisl and Brian in 2009, after he found himself “really frustrated with the music scene at the time,” Leisl says. Brian had the goal “to do something completely and totally different from anything he’d ever done before,” she says. They drew inspiration from artists including Tom Waits, Firewater and Leonard Cohen, “and then we discovered Gogol Bordello, and the heavens opened, the choirs sang,” Leisl says. When Leisl and Brian began making music, their gypsy-inspired sound came naturally. “All of these fabulous things are just percolating in the back of our heads, but we didn’t sit down to write it; it just sort of happened,” she says.

Together, Juana Ghani create a fiery sound that’s seductive and serpentine, with a creeping darkness that would befit a broken-down carnival. While Leisl says their earlier sound reminds her of the Mediterranean music she grew up around when she was a child in Sardinia, Italy, Juana Ghani’s more current work, such as She Lost Her Head, is more klezmer-tinged. The songs on Juana Ghani’s debut album, Shall We Live Forever, were “a bit more gypsy-influenced, but they didn’t have a lot of the traditional instruments as a focal point,” Brian says. On She Lost Her Head, he says, “they’re a little bit more to the forefront.”

The narrative told on She Lost Her Head is that of “a descent into complete and total madness,” Leisl says. “Whether that’s emotionally and personally, if that’s politically, if it’s spiritually, whatever interpretation you put to it, it’s that descent down into just total surrender to the insanity.” Some of the songs are about real-world subjects, such as the situation of the Roma people in Europe (“Sing Little Bird”) and the band’s favorite vodka, Five Wives Vodka (“Na Zdorovie”), but others are more surreal.

“Spanish Raven” is based on a dream Leisl had, and “One Man Dead,” she says, is “a modern retelling of Julius Caesar’s assassination from the point of view of the knife.” The song “Third of May” was loosely inspired by a news story about a woman who “turned herself in after being missing and presumed dead for 11 years,” but in Juana Ghani’s version, she says, the woman is “fantasizing about leaving her hectic, circus-like life and just disappearing to a place that she is convinced is so much better.”

But every listener will draw their own line between what’s real and what’s illusion on the album, and find their own meanings in its haunting tunes.

“Truth is where you find it and where you want to see it,” Leisl says. “It’s all our own interpretations.”