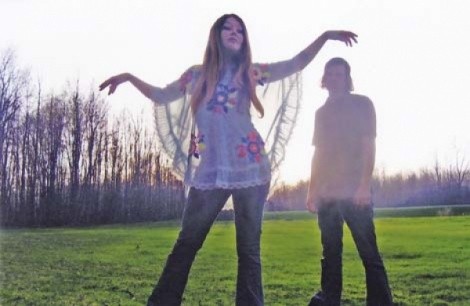 There are other sludge-metal bands, even other loud two-piece husband-wife duos, but then there is Jucifer. The name is enough to strike terror into shuddering eardrums. The two-member onslaught of Gazelle Amber Valentine (vocals, guitar) and Edgar Livengood (drums—what bitchin’ rock star names!) formed in 1993, releasing one album after another, juggernauts of sheer sound tempered with moments of poppy insolence, brash punk and banjo breakdowns. After their last album, the massive double-set L’Autrichienne, a theme album about the French Revolution, they are set to release Throned in Blood, a deceptively brief yet dense-as-dark-matter disc about war.

That in itself isn’t so remarkable, human conflict being heavy metal’s stock in trade. But an album by them makes you feel like you’ve lived—no, endured—the subject matter. A song like “Work Will Make Us Free” from Throned In Blood is uncomfortable with its bleak, trudging rhythms that feel like feet leading to the concentration camps that bore the German version of that inscription above their gates. You might think the music was the product of intense research, but Valentine says it’s less pedantic: “We both read all the time and watch educational shows when we get a chance. If you’re interested in stuff like history and human nature, it’s fascinating.”

But it’s not a scholastic exercise. She notes, “Music is really emotional for us, and when we learn about something that touches us, we kind of exorcise those feelings by putting them into songs.”

Jucifer isn’t just a band to the pair—it’s a lifestyle, living in an RV in between shows, as nomadic as ancient warriors. She calls it an “edge lifestyle.” One of the few things they do share with other bands is the two-piece configuration. “It used to be annoying when we were treated as weirdos for being a two-piece. Now it’s annoying when someone thinks we’re jumping on a trend, since in the last few years a bunch of loud, heavy two-piece bands have come out, and some of them have copied a lot about our show.”

“We’ve always approached our records like movie soundtracks,” she adds of their cinematic quality. “We like to feel that a record takes you somewhere. But before L’Autrichienne, we never made the concepts we were building albums around clear. We used to think it was better to be subtle. But we learned that subtlety can mean the story getting overlooked, which is pretty tragic when you’ve put so much thought into mapping it out.”

This album is yet another departure for the band, whose past few releases have been on Relapse Records, as they’ve started their own label, Nomadic Fortress. Like everything they do, it’s by sheer design. “Everything in our lives points us toward wanting autonomy and a streamlined existence,” Valentine says. “To focus and be and do purely what we believe. As part of expressing what we want to express in the most pure way possible, we’ve always wanted to have our own label, and before now, we just didn’t feel that we were ready to take it on. Now we are. And we’re really happy about being able to license the vinyl to Alternative Tentacles. Jello Biafra being a fan of ours still totally blows our minds.“

Here barely six months ago, Valentine notes that they don’t get to Salt Lake City much, but this is a “quickie” before they depart for Europe in April. You can expect them to hit Burt’s like a beachhead.

“Burt’s is awesome, especially now that they’ve expanded. We played it the first time years ago when it was just the tiny bar. Our equipment took up so much of the standing room that people had to push Edgar’s ride cymbal out of the way to get to the bathrooms!”