If you're getting high while enrolled in Taylorsville drug court, Michael Kwan may make your life hell. Or not. 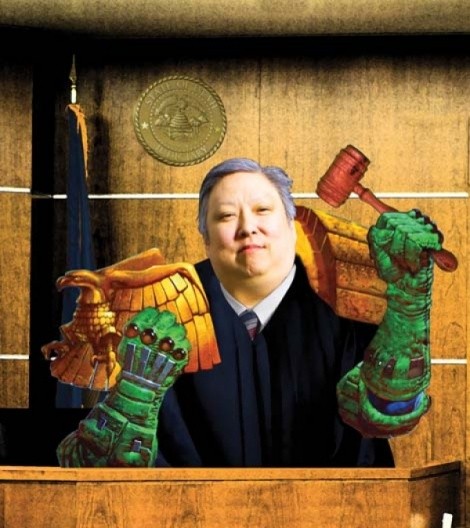 Taylorsville Justice Court Judge Michael Kwan wants to know where the drug-court defendant got his meth. The man says that he got it at a 7-Eleven. Kwan looks mildly perplexed. “So, while you were at 7-Eleven you picked up a Slurpee and some meth?”

The man stumbles through an explanation for his relapse that involves a friend at the 7-Eleven who gave him the drugs. “You have really nice friends,” Kwan says. “Didn’t that put up any red flags? ‘Danger, Will Robinson, danger?’”

It’s an early Tuesday morning in February in Taylorsville Drug Court. Most drug-court defendants have opted into the program after making a plea in abeyance for a class B misdemeanor, which means that if they complete the court’s typically two-year supervised program, the misdemeanor will be removed from their record. Before Kwan’s bench are 20 drug-court defendants who have had what the court calls “perfect weeks,” meaning clean drug tests and attending substanceabuse treatment. They are taking part in peer review, where, at 7 a.m. every Tuesday, they recommend sanctions against those whose tests have caught drug use. The peer review is a key component of Kwan’s court, even though it is not included among the National Drug Court Institute’s best practices (pdf).

The 7-Eleven patron’s peers recommend delaying his graduation from drug court by demoting him to a more demanding level of drug testing and treatment supervision by privately owned company Judicial Supervision Services [JSS], which is both the treatment and probation arm of Kwan’s drug court. After Kwan, JSS owner and probation head Karena Jackson is the most authoritative figure in the courtroom. She tells the defendants that she will either “walk you through it or drag you,” but it is their decision.

In this case, the man isn’t demoted. “I’m not moving you down,” Kwan says. “I have faith.”

It was also faith that Kwan requested from the Taylorsville City Council on Feb. 10 when he asked for control of the 11-year-old justice court, which primarily deals with traffic violations and all class B misdemeanors and below, along with its drug court and an award-winning domestic-violence court. “Take a leap of faith in me, in my ability to run the court,” Kwan said.

According to city estimates, Taylorsville Justice Court is facing a $400,000 deficit, compared to almost $600,000 in the red the year before, with more than $3.5 million in fines yet to be collected. It’s clear the court, Taylorsville Mayor Russ Wall says, “doesn’t have any concerns about budget, but it’s [the city leaders’] chief responsibility to manage funds.”

At the next council meeting two weeks later, Kwan promised to focus on collections, generating revenue and reducing expenses. He said cutting drug court would save only $29,000, while expenses for public counsel and jury trials would increase.

“We have no choice,” Wall says. Taylorsville either allows Kwan to “try to fix it, or closes it down.”

There’s a lot riding on Kwan’s bid to return Taylorsville’s justice court to profitability, including, Wall told the council, Kwan’s “reputation as a judge.” At least in the early years that reputation, according to one attorney, was “a hanging judge with a sympathetic heart.”

Drug court is, by nature, theatrical. The judge, through banter and discipline, seeks to support defendants in their quest for a better life. But in Taylorsville, the theater, Kwan’s critics argue, has become the court itself. Whether it’s Kwan throwing former Taylorsville prosecutor Lorenzo Miller into a holding cell over a witness scheduling issue, being reprimanded by the Utah Judicial Conduct Commission in 2006 for an off-color remark relating to Monica Lewinski or the justice court turning into a money pit, controversy has never been far away. Now, though, it is the drug court itself that faces scrutiny from retired Judge Dennis Fuchs, who on April 1 will begin a two-year state-supervised certification process for Utah’s drug courts. Fuchs started Utah’s first felony drug court in the 1990s, which inspired Kwan to start his own.

Kwan takes it all in stride. Some “people think I’m Attila the Hun, others Gandhi. The truth is neither. I’m a guy trying to do his job to make a difference in his community.”

Kwan’s sympathy is often apparent in court, as he cajoles relapsed defendants along. Focus on the day to day, he urges, not the big picture, “and you’ll do fine.”

He disputes the hanging-judge sobriquet, saying he’s typically near the bottom of jail statistics for incarcerations. It’s apparent, however, watching him in court that the occasional leniency he displays aside, the drug court’s “clients” have surrendered their destiny to the court and JSS for two years and potentially thousands of dollars in treatment costs to JSS.

“People think I’m Attila the Hun, others Gandhi. The truth is neither. I’m a guy trying to do his job to make a difference in his community.” –Judge Michael Kwan

In 2002, Taylorsville prosecutor Lorenzo Miller, who lost the city’s prosecutorial contract in 2009 after another firm submitted a lower bid, introduced a minor in possession of alcohol plea-in-abeyance program to Taylorsville “because I felt very strongly occasional [drug] users and recreational drinkers need to be gotten in and out of the system as fast as possible” and should not be in drug court.


Minors would pay a discounted fine, do a few classes and be released. Kwan, however, grew to feel some minors weren’t taking their cases seriously enough, so “he unilaterally put them in the drug-court program,” something Miller adamantly disagreed with. To have minors in drug court, associating with addicts and hard-core drinkers, Miller fears, spells disaster. “We are turning 18- to 21-year-olds into criminals.”

Kwan disputes Miller’s account, saying the decision to return minors on “a fast track” back to drug court in 2005 was a group decision involving the prosecutor, legal defender and treatment provider.

Most minors were taken out of drug court in 2008, too late for former Taylorsville Justice Court defendant 21-year-old Jessica Deuel who, while she didn’t emerge from drug court a criminal, says she barely made it out alive. Her odyssey through the voluntary court for a minor in possession of alcohol charge and a tobacco ticket in January 2008 led her to classmates in treatment who introduced the self-described “mild stoner” to harder drugs. Despite intermittent work in supermarkets, Deuel struggled to keep afloat. Unable to pay for her own drug testing, Kwan suggested she sell her plasma. Those sales, she says, resulted in a seizure, while the court’s control over her life ultimately led her to a suicide attempt.

After nearly two years, Deuel opted out in November 2009, only for Kwan to sentence her to further JSS supervision and the loss of her drivers license for three years. She says the financially onerous system mandated by Kwan and JSS grinds people down rather than helps them change, leading many defendants to feel they are set-up to fail. While the 42 people who graduated from Taylorsville and Holladay drug court in January may well not agree with her, Deuel says drug court and JSS “are so unforgiving, they punish you and punish you and you end up in a bigger hole.”

Watch video interviews with Jessica Deuel on the following pages