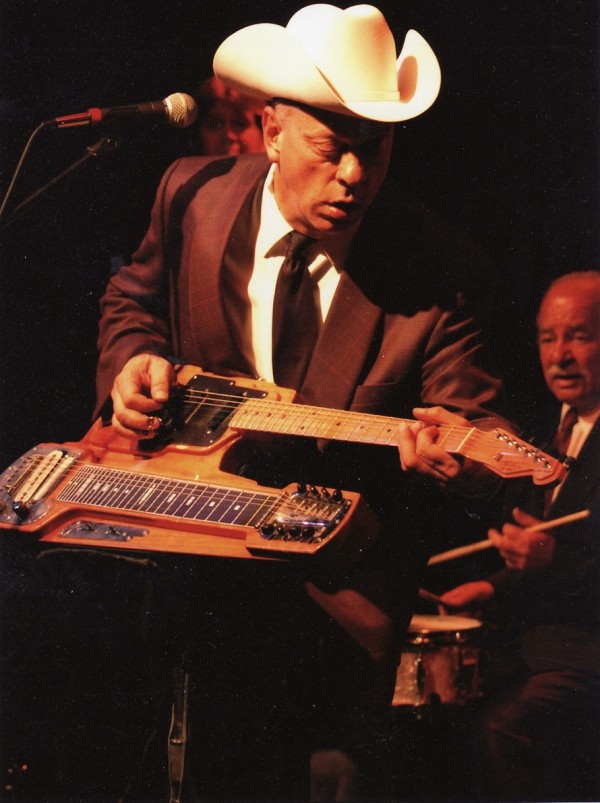 What defines a rock star? A country star? Junior Brown is both, but not by conventional definitions.

The common denominators are music and fame. The intangibles—musical ability, stage presence, character—are what matter. Brown has them all, but wears them uniquely.

Clad in a respectable, gentlemanly suit accessorized with a smartly worn cowboy hat, Brown cuts more a fatherly, 1950s figure. He could have been a sideman for Johnny Cash’s early gigs. His resonant baritone is mellow, with just a hint of don’t-fuck-with-me-and-I-won’t-fuck-with-you attitude—and a wickedly dry sense of humor. He’s also justifiably proud of his wife and bandmate, “the lovely Tanya Rae Brown.” His band dresses like their leader. He cares about things like punctuality, as chronicled in “I’m Headed Back to Austin Tonight,” from his 2012 EP, Volume Ten.

Junior Brown is all class, and reserves the flash for his music. All the bright lights, flash pots and pyro he needs is in his hands—which makes it extra stunning when he lights the fuse in a song that sounds like one of Grandpa’s old favorites. Imagine listening to Roger Miller or George Jones (RIP) with him. Suddenly, the guitarist seems to experience—but also maintain control of—some kind of epileptic fit.

That’s Junior Brown. He wields his trademark double-neck guit-steel guitar like Hendrix, Page or even Slash, except he doesn’t need to put a foot on his monitor and soak up the adulation. He’s hunched over, focused on his music, cranking out the sickest licks you’ve ever heard—with only his guitar. And this is traditional country music that your elders would deem wholesome—even when he interpolates some of Hendrix’s fuzzy riffs.

Junior Brown embodies all the intangibles, but plays it so cool that he dwells in two worlds. While mainly occupying the realm of traditional/neotraditional country music, Brown consorts, and even tours, with the likes of psychobilly legends The Reverend Horton Heat and will even pop up in strange contexts, such as MTV’s old alternative-rock show 120 Minutes. So if—when—you see him Wednesday night at the State Room, expect to witness everything you love about music, but a different kind of spectacle. One that you won’t soon forget.