Spotlight makes the work of journalism both heroic and painfully human. 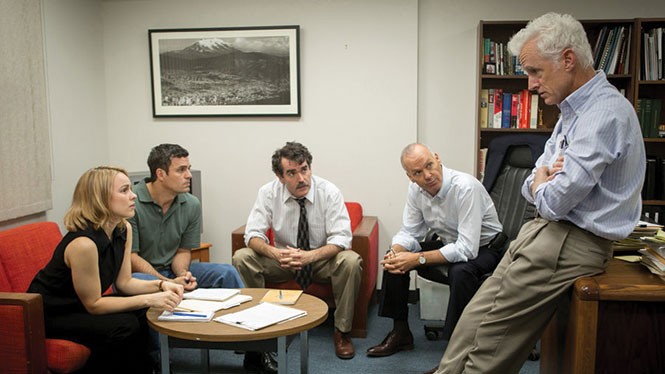 If you're skeptical about all the praise heaped on Spotlight from film critics in print media, it's understandable. We've all got our sweet spots, and those of us who sometimes wonder if our own dead-tree outlet will be the next one to start hemorrhaging employees are bound to gravitate toward a story about how important these publications are, and what can be accomplished through time-honored shoe leather and paper-chasing. If a movie is going to spend a lot of time telling you that you're awesome ... well, come on, we're only human.

But that's also a fairly limited way of looking at Spotlight, which is more than just a big sloppy kiss in the general direction of investigative reporting. In fact, it may be even more compelling as a look at all the things standing in the way of breaking an important story, and how easy it can be to miss that something is a story. In the course of addressing issues that are particular to the real-life time frame, co-writer/director Tom McCarthy also looks at issues that are bigger than the context of turn-of-the-21st-century newsrooms, folding them into a terrific slow-burn procedural.

The main story begins in 2001, as the Boston Globe is bringing on new editor-in-chief Marty Baron (Liev Schreiber). He wants the paper's "Spotlight" investigative news team—editor Walter "Robby" Robinson (Michael Keaton) and reporters Mike Rezendes (Mark Ruffalo), Sacha Pfeiffer (Rachel McAdams) and Matt Carroll (Brian d'Arcy James) to turn their attention to the case of a Catholic priest accused of sexually abusing several children. And as they begin digging—at first reluctantly—into the case, they discover that the Catholic Archdiocese of Boston might be engaging on a massive scale in hushing up cases of abusive priests, and deliberately relocating sex offenders to other parishes.

McCarthy and co-screenwriter Josh Singer faced a tough challenge in juggling the details of these cases—and the many newsroom employees, victims, attorneys, church officials and other peripheral characters involved in the investigation—in such a way that it would still be easy for a viewer to follow. But the script proves marvelously efficient at conveying that nuts-and-bolts information, while never feeling that it's only about expository details. Like the reporters at the center of the story, Spotlight always feels like it's trying to dig down to the next level.

And what it finds on those next levels is generally fascinating. The story's timeline intersects with the events of Sept. 11, 2001—which also had a Boston connection—and Spotlight effectively conveys how a developing story, even one this potentially huge, can get set aside when an even bigger story emerges.

There's also an ongoing undercurrent dealing not just with the work of intrepid journalists, but the way that work fits into a business trying to survive—at a time when newsroom layoffs are being discussed—and beat its competitors. There's a terrific moment where Matt Carroll discovers that one of the houses used by the church as a residence for "recovering" pedophile priests is in his own neighborhood, yet is told by editors not to warn his neighbors, just to make sure that the rival Boston Herald might not get wind of the scope of the Globe investigation. It's rare for a movie about journalism to recognize not just the importance of getting a story, but of making sure the other guys don't get the story first.

Spotlight's most intriguing subtext, however, might be the inevitable subjectivity of the people reporting the news. Right from a prologue set in 1976, McCarthy sets the stage for Boston as a "company town" where the company in question is the Roman Catholic Church, exerting its influence over the faithful. Yet this isn't a conspiracy story in which the only conspirators are on the outside of the newsroom; there are frequent allusions to the opportunities the Globe had to dig into this story many years earlier. The restrained performances are top-notch throughout, and Spotlight explores just enough of the journalists' personal lives to show their own emotional connections to the Catholic Church, and how it might have taken an outsider like Baron to shake them from their assumption that this couldn't really be such a horrible story. Spotlight may make the results of old-school reporting look heroic, but it also makes that work look human.