Will this drink cost you your temple recommend?

Relaxing the Body But Not the Mind
People can do stupid, if not dangerous and illegal, things while under the influence of drugs or alcohol. What if there were a substance that made the body feel good, yet didn’t affect the mind and wasn’t physically addictive?

“‘Drunk’—I don’t even use that term when I talk about kava,” says Jan van der Beek. “I can drink kava for 10 straight hours, but it doesn’t impair my thinking. In 17 years, I have yet to see a guy say a bad word to another guy at a kava party. We’ve never had the cops have to break up a kava party.”

The lead singer for Natural Roots, a reggae band of local Samoan and Tongan musicians, van der Beek even wrote an often-downloaded song that sums up the kava experience with the lyrics, “I’m feelin’ irie from my head to my toes, but my mind is so clear.”

Drinking kava is legal; it has even been used in nutritional supplements available in health food stores promising a variety of benefits such as aiding sleep or reducing anxiety. 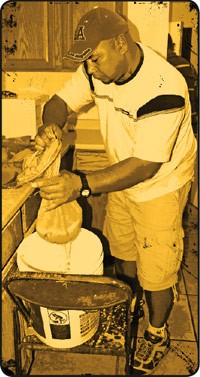 Utah families typically sell the powder base to others after importing it from Fiji, Tahiti or Tonga. A sandwich-size bag goes for about $10. Mixed with water through a straining process, one bag of powder produces enough liquid to serve four people for an evening. The fund-raising aspect of kava clubs is typical of the Utah Tongan community.

“Instead of going to a bar and spending $20, we come here and share [donations] with our cousins,” says Isileni Fiefia, a member of one of the three or four kava clubs that can be found operating almost every night in the Glendale area. “The $20 we spend here is very useful in Tonga.”

Kava use in Tonga has been traditionally associated with royalty, and in Samoa (where it’s known as ’ava), tribal chiefs used it to build their communities and forge alliances.

“It’s like a sacrament. It symbolizes a covenant,” explains Rich Kaufusi, who runs a minority scholarship program at the University of Utah and is an LDS stake president in Salt Lake City. “In any important ceremony, kava is there before anything else takes place.”

While Tongan kava clubs and Samoan kava parties are loosely modeled on traditional ceremonies, for some, recreational kava is a long way—too far away—from the original intent of the beverage.

“It’s been hijacked by the rising generation,” says Kaufusi. “Are they bad people? No. They do some good things,” he says, referring to the fund-raising efforts for the homeland. “But it used to be used as a validation of something taking place. Now, it’s more often used for just getting away from home.”

Kava Me, Please
While traditionalists bemoan cavalier kava use at clubs or parties, those who use it recreationally say they are simply trying to keep traditions alive.

“This is where we remember where we came from,” Fiefia says of the kava club. “People feel at home here. This is more like a family gathering. Wherever you came from on the island, when we come here, we become a family.

“In Tonga, we never did have money, so we shared everything. We still have that sharing in our heart even though we live in a different country.”

“It’s like a community here,” says Lani Mo, president of a Salt Lake City kava club. “We’re around here 24/7 for each other. We come here, and we share about life. We take care of each other. That’s the main point. We share everything we get.”

There is certainly historical justification for Polynesians worrying about the chipping away of their culture while constantly confronted with outside influences. The tattoo culture in Tonga, for instance, was virtually eliminated over time when early Christian missionaries convinced the Tongan king that such practices weren’t “civilized.”

Still, the claim that kava is necessary to preserve the culture makes some within the community bristle, because they feel that men staying out all night, every night, to drink kava can lead to family and economic neglect. Those who criticize recreational use of the beverage link the behavior with general shiftlessness, even the loss of jobs.

Kaufusi says his No. 1 message to young people in the Polynesian community is, “I do not want them to use culture as an excuse for mediocrity. If living my culture means losing my job, then that’s not my culture.”

There is little argument within the kava clubs against that opinion. It would be wrong, they say, for men to skirt their responsibilities because of kava abuse. “You take care of home before you leave,” Mo says.

“We still go to work, and we still raise our families,” Fiefia adds. “Family comes first.”

There is also some distinction in the minds of recreational kava users between fai’kava occasionally, and fai’kava all night, every night. “I think it’s bad when you hear about some kid’s dad doing it every night,” says van der Beek, wistfully.

And some members of another sizeable group within the Polynesian community—women—clearly share that view.