A cool oasis for summer workouts 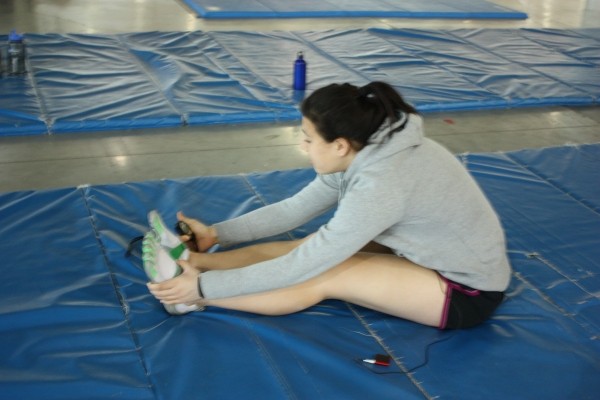 There are so many ways to get a good workout in Utah that the biggest difficulty is deciding what you’d like to do. But for those who don’t appreciate working up a sweat outside in the heat of sunny summer days, there’s one particularly great solution: a very affordable Olympic legacy, The Olympic Oval at 5662 S. Cougar Lane in Kearns.

Right now, the Oval isn’t about skating, because there’s no ice. Public skating sessions won’t start again until May 9, and even then, skating will be limited—just one hockey rink will be open. The speedskating oval won’t be iced and open to the public until July 17.

But the Oval offers a lot more than ice skating. A carpeted running track surrounds the speedskating track, giving runners a flat, impact-free surface and a measured distance. Baby strollers are permitted. Best of all, the temperature inside the building averages a nice, cool 62 degrees. The running track is open to the public whenever the building is open (5:30 a.m.-6 p.m., though evening hours will be extended to 9 p.m. later in May). No matter how long you stay, it’s only $3 to use the track.

What if you don’t feel like running? That’s fine. Hop on one of the spin or exercise bikes on one side of the oval. Or stand in front of the long mirrors behind the bank of bikes and dance, or create your own aerobics class. Plus, as of May 9, you can ice skate during public sessions for $4 ($3 for kids 12 and under). Public sessions are reduced during summer; there are no sessions Tuesdays or Thursdays, and the Oval is closed Sundays. But there are regular 7 to 9 p.m. sessions Mondays, Wednesdays, Fridays and Saturdays, plus an extra Saturday afternoon session from 1 to 3 p.m.

The Oval purchased new skates this year, so the price for skate rental has gone up. Instead of $2, it’s now a “whopping” $2.50. That means two hours of relatively cool skating exercise costs just $6.50. You can rent figure, hockey or speed skates, all for the same price. But if you intend to go skating frequently, it may be more economical to buy a pair of skates new or at a sporting-goods store that sells used equipment.

If you have a large family, an Olympic Oval membership is a good money-saver. A family pass—good for a family of up to seven for one year—costs $119 and includes skate rental, plus access to the running tracks and bikes. But no cheating allowed: The entire family must be living in the same household.

A membership also comes with a few nifty little extras. There’s a free Learn to Skate lesson for everyone on the pass, plus a free Learn to Curl lesson. The skating monitors, identifiable by their Oval vests, are excellent skaters, and very friendly. They’re always willing to give tips to help less-experienced skaters improve.

Once the rink opens, there are also drop-in hockey games for those who enjoy really active exercise. Even though it’s on ice, you will work up a considerable sweat, what with the helmet, all the pads and sprint skating. Summer leagues are forming now, and games start the second week of May. To join a league, Mitchell Snyder of guest services suggests talking to Jae Worthen, either by dropping by the Oval (you’ll have to sign standard release forms) or calling Worthen at the Oval (801-968-6825) to find out more information.

Here’s a hint when calling the Oval: The phone will be answered by a cheery automated voice with a long spiel of information that you probably don’t want to hang on and listen to. So, as soon as Ms. Cheery answers, press 0. You’ll quickly get a real human who will know the answer to just about any Oval-related question you want to ask.

One of the big benefits to hitting the Oval in the morning is free inspiration. Members of the U.S. speedskating team are often there for dry-land conditioning from 5:30 a.m. until about noon. When you see world-class athletes training, it becomes almost instinct to push yourself just a little bit harder.