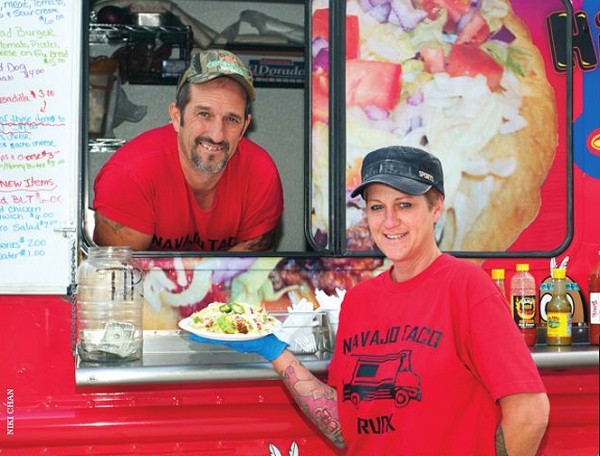 Next to an oversize ice cream truck near Gallivan Plaza, a line has formed. The pleasant murmur of small talk hums through the crowd. Then, through a small sliding window on the truck, a hand extends. Fries appear. Mounds of red kimchi cabbage droop off the potato slices. A woman reaches up for her bounty.

Food trucks. They are ideally suited for the modern American way of life: mobile, simple yet satisfying, and inexpensive. They owe their inspiration to immigrant entrepreneurs, the kosher hot-dog carts and taco stands that long ago made their way onto city streets. Then came the foodies—creative dreamers, young and old—who latched onto the model, making it their own.

In 2013, Salt Lake City’s food-truck scene took off with even more fresh faces and new ideas. About a dozen trucks now rotate through the Gallivan’s Thursday lunch truck rally; check out the Food Truck Thursdays Facebook page (Facebook.com/FoodTruckThursdays) for a list of which food trucks will be participating each week. It’s a tight-knit community with a lot more cooperation than competition. And there’s still room for more trucks.

Grub Truck Food Co.
Halie Gundersen is one of the new faces in the Salt Lake City street-food scene. She started her food truck in July, and scooped both the people’s choice and the judges’ awards for at SLC’s Eat Local Week kickoff party in October. Her winning dish: papas rellenas, which are balls of fried potato stuffed with local beef and topped with cilantro creme fraiche.

A marketing major and former waitress, Gundersen is obviously full of a chef’s natural talent. This winter, she’s stirring up a butternut curry and a Reuben sandwich with pickled onions and sauerkraut.
Prices range from $5 to $8. GrubTruckFoodCompany.com

Green Apple Juice Co.
Another rookie crew—Jessica Seegmiller, her brother Jeremy Seegmiller and their friend Chad Barrett—started their food-truck business in June with a converted camper trailer hand-painted with cartoon fruits and veggies. This lively young crew is all about the outdoors: skateboarding, running and hitting the slopes in the winter. As hard as they played, the three friends craved fast, healthy meals that wouldn’t slow them down. But nothing fit what they were looking for. Enter the juice truck.

Easy Greens is easily the most popular health drink, with kale, spinach, apple, lemon and ginger. The Tropical Breeze is a close second, and much more fruity, with orange, coconut, pineapple and strawberries. All of the juices are made with as much fresh, local and organic produce as the crew can find.
Prices range from $2.50-$5.50
GreenAppleJuiceCo.com
or @drinkgreenapple on Twitter

Cupbop Korean BBQ
Yeiri Kim and her husband came to Utah from Korea to study business, but when they realized how much Americans love Korean food, they started a food truck on the side. Now, their veggie-noodle bop (a takeoff on bibimbap, Korean for mixed rice), kko kko bop with barbecue chicken and b-bop with beef, each served in a handy cup with veggies, is making waves all over town.

When I showed up to the Gallivan food-truck rally, I beelined it to the Cupbop truck. It was a silly-looking vehicle, big and black, painted with a smiling cartoon bowl of rice, with a word bubble that read, “Shhh … just eat!” I soon found out that I wasn’t the only one who wanted Korean barbecue. The joint was already sold out.
Prices range from $6.50 to $8.50 Facebook.com/CupbopKoreanBBQ

Waki Paki
Mo Burki’s food story starts in Pakistan, where, as a young child, he followed his mother around the family kitchen, watching her create delicious foods spiced with coriander, cumin and ginger. Later, life took him to Indiana and then to Utah, where he worked as a mechanical engineer. An unfortunate layoff turned into a promising new start, and in 2012, Burki rolled his Pakistani kitchen onto the road.

The amount of work it took to run the Waki Paki as a one-man-show surprised Mo, but his love for cooking—and eating—kept him going. His food kept customers coming back: chapli kebab pita with local grass-fed beef and the flavors of Punjab; the veggie samosas with tangy yogurt chutney; and the dal wrap, made vegan and gluten-free.
Prices range from $3-$7. WakiPakiFoodTruck.com

Rubadue’s Saucey Skillet
Carl Rubadue, an American culinary federation executive chef and Saucey Skillet’s head chef and owner, has a long history with food. From hospitals to ski resorts to private clubs and now a food truck, he’s used his knife skills in just about every kitchen.

The food-truck business, Rubadue says, is fast and hot and keeps him honest. At the truck, there’s no hiding what goes on in the kitchen—but why would he want to when it’s so good? Customer favorites are the cilantro-pesto chicken sandwich on the ciabatta roll and the breaded Thai curry crab cake topped with a lemon-ginger sauce.
Prices range from $3.50 to $7. SauceySkilletAcademy.com

A Guy and His Wife Navajo Taco
Troye and Kim are characters who are about as colorful as their red & purple truck. With Troye’s mustache and country drawl and Kim’s tattoos, they seem like an unlikely pair in the food-truck circuit, but their frybread is flying off the truck.

Troye points out that Navajo tacos were once standard fare in Salt Lake City. When the local food started disappearing, it seemed to the couple like a great time for a revival. They went to a Navajo friend to learn the recipe, then, in late summer 2012, took the frybread to the street. Along with the tacos, Troye and Kim serve standard American fare like hamburgers, hot dogs and pizza, with one twist: Everything is served wrapped in frybread.
Prices range from $3 to $8.