Smiling and full of charm, Ricardo de Sousa Costa hardly shows the weariness of barely sleeping the nights preceding the Park City Kimball Arts Festival Gala. He stands in front of “There’s Still a Light on the Inside” (pictured below), a steel sculpture he created during a 10-day residency called Relevant.

He and the five other visual-art student-residents have pieces on display this evening, and they fluctuate between pride and nervousness, talking to wealthy collectors looking for the art world’s Next Big Thing. The live auction where these pieces will be sold is an important fundraiser for the Kimball Art Center. The students, however, have already reaped Relevant’s benefits; the one-on-one time with the mentor/established artist they were paired with, the deadline-induced creativity and the camaraderie of this experience have proven invaluable.

That’s what Robin Marrouche, Kimball Art Center executive director, had hoped when she modeled Relevant, now in its second year, on two very different programs. “In 2003, I visited the Sundance Producers Lab and was struck that these artists could be sequestered in a private, safe environment where they could hone their craft, pitch their projects and work uninterrupted,” she says. “Years later, I became interested in Project Runway because there’s a theme, a timetable, a budget, and there’s rapid creativity unfolding—and not so much the reality part of it.”

Relevant came about as Marrouche and the board of directors were questioning Kimball’s identity. “We asked, ‘Where can we be the most transformative in the arts?’” Marrouche recalls. “The idea of giving emerging artists a hand up and a unique residency became really exciting.”

After they were selected, Relevant residents were flown to Park City, where they stayed at Spiro Arts. They were given materials, 10 days and a theme. The 2011 theme was “The Future of Art,” a nod to Kimball’s future renovations and, potentially, these emerging artists; the 2010 theme was “New Beginnings.” In speaking of this new venture, Marrouche borrows a quote from de Sousa Costa: “You can’t discover new oceans if you don’t leave the harbor.”

As a 10-year-old immigrant coming to America, de Sousa Costa literally left the harbor of his birthplace, and it’s also a timely metaphor for creating “There’s Still a Light on the Inside.” “I’ve never worked so extensively with steel, and the fact that I was making it for an organization and their directions and hopes—not for myself—it was a leap of faith,” he says. “That was leaving the harbor.” 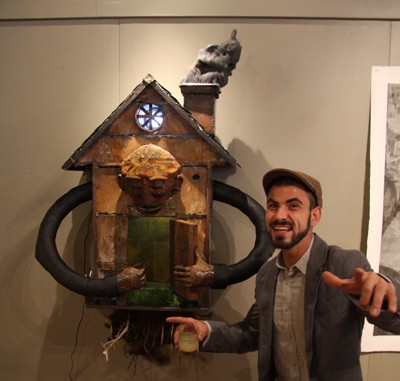 During the residency, Jared Steffensen, sculptor and University of Utah adjunct professor, was de Sousa Costa’s mentor. Each day, the two bonded over two 20-minute drives to Peoa, where de Sousa Costa worked in steel sculptor Jim Bann’s studio. The mentorship was as much about building a relationship as it was about the work process and critical feedback.

“We had to figure each other out first. And we realized our work, however different, often touches on the same theme: the idea of home. I’m trying to come back to it, and Ricky brings it with him,” Steffensen says. With that, he was able to deliver questions to help de Sousa Costa refine his piece and his role as an artist.

“It’s an extremely intense situation; they are fully immersed. Because of that, I think we and they forged some pretty good relationships,” Steffensen says. “For all of the residents, I wanted them to stay true to who they are.”

And that was the most helpful aspect of the mentorship, de Sousa Costa says. “Kimball wanted a very particular product [one that was salable, while being contemporary], but [Steffensen] was the one that allowed me to open a little bit more, to not be within boundaries.” Beyond that, he adds that learning what it meant for the other mentors to be artists, to think like artists and to balance money and expression were all valuable lessons.

During the auction, “There’s Still a Light on the Inside” sold for $2,000, but it wasn’t a big deal to de Sousa Costa. “It’s never been a motivation of mine to sell. I make art because it’s something that I have to say,” he says. “The whole auction part was my least favorite part.

Currently, the Relevant 2011 exhibition is showing select works from the 2010 and 2011 mentors and students. The pieces created by the 2011 students during the Relevant residency were taken by the purchasers after the auction, but are pictured below: