The Shrines' new album inspired by frontman's breakdown and recovery 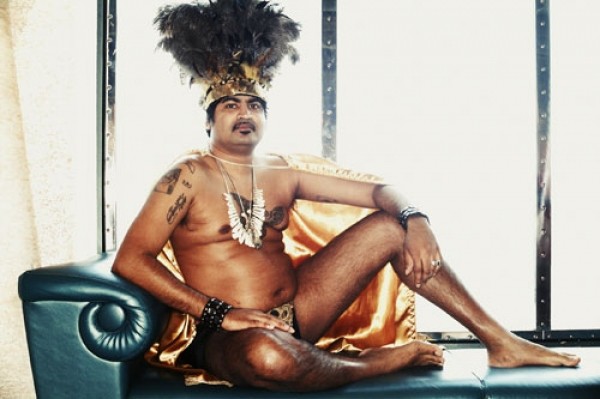 “My mom said that when they tried to teach me how to eat solid food, that I would usually spit out half of it ... I would kind of perform that, so I guess that’s when they realized that I would be a performer,” says Arish Ahmad Khan, better known as King Khan, the flamboyant frontman of Berlin-based garage-rock/soul band King Khan & the Shrines. “And I have vomited onstage, so things don’t really change—the circle remains unbroken.”

So goes the lighthearted (if somewhat gross) beginning to a conversation with Khan, who, ever the joker, answers the phone using a fake heavy Indian accent. And for a guy who is famous for his ostentatious stage costumes (donkey-teeth necklace, black underwear covered in tiny mirrors, feathered headdress, satin cape and not much else) and eyebrow-raising onstage antics (he once stuck his bare ass in Lindsay Lohan’s face), it could be easy to assume that that in-concert spirit of freedom and revelry is also reflected in his personal life. But in truth, Khan has had some serious darkness to exorcise lately.

King Khan & the Shrines formed in 1999, shortly after Khan’s previous band, The Spaceshits, broke up. Influenced by a variety of musicians including Sun Ra, James Brown and Otis Redding, the Shrines’ bread & butter is a hip-shakin’ party blend of ’60s soul, free jazz, garage rock, R&B and, of course, punk. “I’ve been a punk for a long time,” Khan says. “So I think that’s always going to be there.”

Despite playing music that could be described as “retro,” King Khan & the Shrines don’t box themselves in stylistically. “I never wanted to be purist about it because a lot of bands when they try to do this kind of sound, they try to emulate it to a T,” Khan says. “But I like to just be free and be able to mix all sorts of different influences.”

After King Khan & the Shrines released their 2007 album, What Is?!, the band continued to play shows but took a hiatus from recording. They returned triumphantly with Idle No More, but not until 2013, after a six-year gap that Khan says was mainly a consequence of his own struggles. “I went through a real huge breakdown,” he says. “And that happens to everyone eventually, but for me, it was losing three great brothers of mine, people I really loved, and also being on the road so much and away from my family. All sorts of these things kind of all just start eating at your soul. And eventually, I just kind of lost my mind.”

Among the friends he lost were influential punk musician Jay Reatard, who died from a cocaine overdose in 2010 at age 29, as well as two friends who lived in the Kahnawake Mohawk Indian reservation near Montreal, where Khan was born. “When I was a kid, I had some problems with my father, and when he would kick me out of the house, I would seek refuge at one of my Mohawk friend’s house in the reservation,” he says. “That was actually one of the places where I learned a lot about rock & roll and B-movies and cult movies.”

But after spending time in a Buddhist temple in Korea and then two years in psychiatric treatment, Khan was fully recovered. “I feel like I’m in a much better place than I’ve ever been right now,” he says. “It’s just like you learn to appreciate what’s most important, and I kind of lost myself for a while.”

Idle No More—named for the First Nations protest movement that began in Canada in 2012—marks a “big change in my whole way of thinking,” Khan says. “Before that, it was very easy to keep going and kind of destroying yourself every night, but then it really does take a toll. And luckily, I woke up and faced that whole thing.”

Scattered among the jangly tambourines, funky bass lines and sexy horns on Idle No More are multiple serious messages. On “Darkness,” Khan sings somberly, “Endless darkness hiding more than it shows/ This endless darkness never ceases to grow in my soul.” And the song “So Wild” is dedicated to Jay Reatard and one of Khan’s Mohawk friends who was also named Jay. But despite its slight sadness, Idle No More could more accurately be described as a rebirth that rejoices in second chances, love and family, especially as Khan counts his blessings in “Luckiest Man.”

Khan gives at least partial credit for his recovery to music. “I think that music has always more of been a spiritual thing to me than just a job or a pastime,” he says. “One of my biggest influences, for example, is gospel music … and the way that the preacher could take a room and really wash away the pain and suffering of everyone in that room with the power of words and harmonies and sounds.”

At its core, Idle No More is a joyous record about what it means to be human, with all one’s imperfections and idiosyncrasies included. Khan may have been temporarily lost to the world, but music helped him get back to center.

“I think music in general is very uplifting, and for me, it’s the most spiritual sound,” Khan says. “It’s a release. If I listen to people like Alice Coltrane, you hear something that’s completely from another majestic planet, or at least it takes you to another majestic planet. … I think music has that incredible alchemic property of completely taking you away from where you are.”