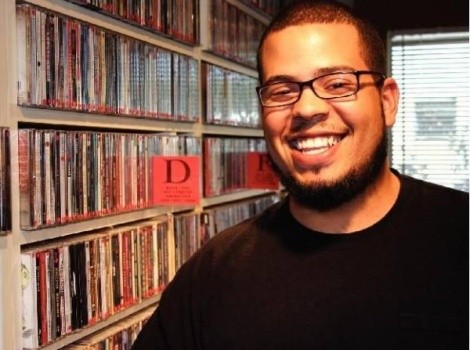 “When I find myself at that last moment, I want to have as many pictures as possible to take with me. I don’t want the next five years of my life to be like my first five: empty, with some really cute sunshine scenes. I want some magical moments,” Hamilton smiles.

Hamilton is widely known for his welcoming nature, a genial attitude well-suited for his position as KRCL’s music director. Some may only be familiar with his 10 a.m. to 2 p.m. show on the local community radio station, but Hamilton has been a fixture on Salt Lake City’s music scene for some time, beginning with his opening spot for Naughty by Nature in 1995.

“I stood in one spot and was frozen for the bulk of it,” the 32-year old Utah native uncomfortably recalls. “That was the first time I realized I was semi-decent at it,” he says unabashedly, charting his music performance career as his confidence—and chops—increased, “I’ve opened for a ton of bands since then Blackalicious, Digable Planets, Black Eyed Peas, The Alkoholics.” Hamilton isn’t bragging—just stating the facts, as he does again in explaining how disgruntled some people were with the shift from KRCL’s old format to its new one. “Early on, I saw some really ugly sides of people and I had never been that criticized before. To have ‘RIP KRCL’ stickers, I thought, ‘This hurts. This sucks,’” he says with a shake of his head. “I’m just trying to make sure KRCL succeeds. Period.”

Hamilton didn’t think he would have a shot at becoming music director during the weekday format transition more than a year ago but he reasoned that he would give KRCL further options by applying for the paid position. It was a rather abrupt change going from his 17 years of volunteering to full-time employment, though. “I went from playing Erykah Badu on Friday night to playing Led Zeppelin on a Friday afternoon. Maybe it was questionable initially if I were sincere,” he pauses then shakes his head at the ridiculousness of that.

“The average radio listener listens 15, 30 minutes a day. They’re tuning in to hear a particular sound, which was the point of the change,” Hamilton explains. “It wasn’t to get rid of a certain style of music. It wasn’t to change the general sound. It was to make it consistent.”

The station hasn’t drastically changed, though, he says. “We don’t have meetings about what record to play and if it will appeal to 18-year-old women. If it’s good, it’s going on the radio—maybe that same day. That’s what we did before; it’s what we’re doing now.” More than a music source, the station also serves as a vital communication tool for the community, “If something’s going on—a PSA [Public Service Announcement]—we read it on air,” Hamilton says. “We’ll let people know if there’s going to be free HIV testing all this week—and these are important things people need to hear about. And we don’t have to bother with selling advertising space.” KRCL’s success has increased and the community support has reflected that with rising interest in what gets spun.

“The reason what we’re doing is working right now is because, sure, you’re still going to go to the same retail sources you usually go to for music, but when you get to the front page of iTunes you’ve already heard a good chunk on KRCL,” Hamilton says. “Radio should be doing right now what it did in the first place: introducing people to new music,” which Hamilton has recently done himself by making a new record with local producer/MC Fisch (Rotten Musicians) for a group they call Julio Child. Their first album is called Cocinado con Julio Child (Cooking with Julio Child) and, while you won’t hear Hamilton play it on air, it is excellent.

It doesn’t sound like a tough gig, but trying to stay abreast of new artists and styles can be wearing on the ears. Hamilton still loves it as much as he did as a 13-year-old intern editing mounds of unheard vinyl for radio play. “My favorite thing is still the big hunt,” Hamilton reveals, “the big search for the next cool-ass record.” To save some time on your own hunt, Ebay set his iPod on random and recorded the results—hopefully they’ll give you some of those magical moments, as well.