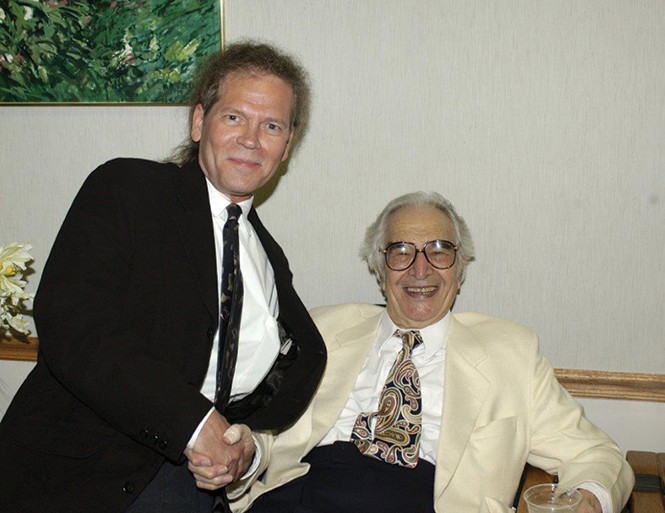 There's a light in the window of the Dolores Doré Eccles Broadcast Center. It's nearly midnight, and KUER 90.1's employees have been gone for hours. Custodial has come and gone; security is getting sleepy. Every door in the building is locked.

But someone has to hold down the fort, right?

For decades, public-radio veteran Steve "Daddy-O" Williams has kept KUER swinging late into the night. His Nighttime Jazz program, which runs from 8 p.m. until midnight, is one of the station's most unique and celebrated offerings. But after 30 years in the studio, Williams is turning off the light—and this time, it's for good.

At the epicenter of Utah's jazz community, Williams leaves behind a rich legacy of involvement, creation and collaboration. In addition to emceeing jazz concerts and festivals throughout Utah and beyond, Williams helped found and organize several festivals of his own, including the popular Salt Lake City International Jazz Festival and the now-defunct Snowbird Jazz and Blues Festival. The host is also a co-founder of Excellence in the Community, a local nonprofit organization dedicated to providing frequent and accessible public performances.

But perhaps Williams' most important work has taken place within the four walls of "Cell Block 101," Williams' affectionately (and aptly) nicknamed broadcasting studio. The solitary host manages his program in its entirety, working his own soundboard while spinning out an organic set list of tracks chosen on the spot.

A self-professed old-timer, Williams eschews MP3 files in favor of physical CDs. Songs are chosen from the stacks of brightly colored jewel cases littering the studio and filling the station's library. All told, Williams estimates 90.1 owns over 20,000 jazz CDs.

"They're all I know. I don't know how to bring anything through this," he says, waving vaguely at the colony of monitors populating his desk. "For me, it would be too hard to find the songs. I never know what I'm playing next. How am I going to find it looking through [the computer]? Are you kidding me?"

Williams' programming springs from varied inspirations, including musicians' birthdays, anniversaries and upcoming stops in Salt Lake City. His set lists straddle the line between continuity and variety, segueing from cherished classics to zany deep cuts and back again.

"I look at it as a piece of creative art," Williams says of each show's carefully selected content. "It's a musical collage."

Throughout his three decades as jazz director, Williams has made a point of introducing audiences to lesser-known jazz iterations and subgenres. From big band to bebop to souped-up classical standards, the program's expanse draws from nearly every corner of the jazz world.

With Williams' departure from the scene, the rickety tent that is jazz seems less stable than ever. Rather than hiring a new program host, KUER has elected to pull Nighttime Jazz from the airwaves after Williams' final sign-off on June 30, leaving a significant void in the ever-shrinking field of quality jazz radio programming. While Williams stands by the station's decision, he called the programming deficit "troubling."

"It's a big loss," he says, shaking his head. "I feel terrible about it, but there's nothing I can do, because I'm done. I've got to move on."

So far, no Utah stations have proposed a replacement program. In the event that they do, Williams says he's happy to help, but worries that such a development is a long way off.

"If somebody comes along and tells me, 'Hey Steve, we're going to try and get a jazz program going again, are you available to help us organize this thing,' then, yeah, I'm available," he says. "But for crying out loud, we've got to have a station first."

However, Williams clarifies, he's certainly not interested in hosting: "My wife would kill me."

In the meantime, Williams plans to stay quite busy, both in the world of jazz and the world at large. He and his wife, Vicki, will begin retirement next month on NPR host Diane Rehm's Bordeaux River Cruise, courtesy of KUER. Upon returning, Williams plans to rejoin the staff of Excellence in the Community as an emcee and fundraiser. The goal is to provide free outdoor jazz concerts at least three times a week, he says.

Williams will also continue emceeing the GAM Foundation's regular concerts at the Capitol Theatre while pursuing personal jazz projects. Currently in the works is a four-disc collection of jazz tunes named after food and beverages, presented in order as a five-course meal, and a television pilot exploring jazz festivals around the world.

At nearly 70, Williams is looking forward to being busy on his own schedule. Still, he says, leaving is bittersweet. "I've been lucky to be able to do this," he says, "and now it's time for me to do other stuff. But how could you not love this job? How could I not miss this?"