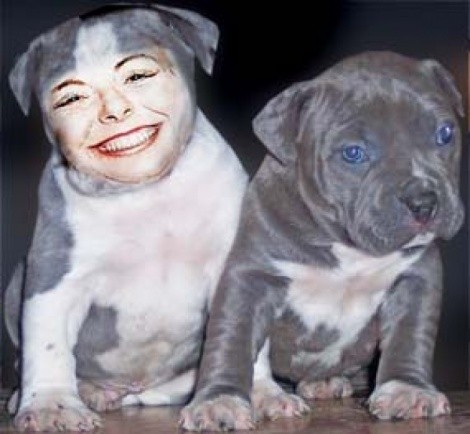 The Associated Press recently discovered that 57-year-old Bernann McKinney was in fact Joyce McKinney, who in 1977, delighted British tabloids with her salacious tale of abducting and imprisoning an LDS missionary in an English cottage, forcing the poor elder to be her sex slave. McKinney railed against the media for having to dredge up her missionary rape past and her flight from justice because she thought they were missing the real story: that South Korean scientists have resurrected five clones of her deceased pit bull Booger.


McKinney was identified after her picture was featured with her cloned puppies. “I don’t want that garbage in with the puppy story,” lamented McKinney in the AP article.

Perhaps the media is missing the point: How could someone so bat-shit crazy scrounge up the $53,000 needed to get Booger cloned and then find access to South Korean scientists? What will this woman do with her growing army of cloned Booger attack dogs? Lord only knows, but let’s hope that LDS elders out there are quick on their bicycles.