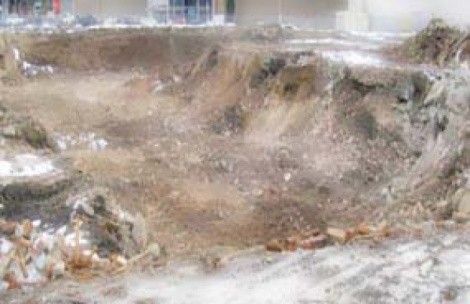 nThe recession has slowed down Utah’s construction boom, but at least our destruction boom is still going strong. Why should the demolition sector suffer simply because there’s no money to replace the buildings we knock down? Holes have become one of Salt Lake City’s greatest natural resources.
n

The Sugar House hole lay dormant beneath a retail district for decades before its discovery made it necessary to raze a slew of locally owned businesses. Since then, the hole has proved so popular that other holes have begun cropping up all over town.

The latest discovery is a magnificent hole at 400 South & West Temple, which federal officials think may rival the Sugar House hole in depth and grandeur. Unfortunately, it currently lies beneath Port O’ Call. Never mind: The government can simply condemn the building and then purchase it from its owners for pennies on the dollar.

Really, it’s the price of progress. Why have a bunch of useless, old, thriving businesses lying around when we could have a lot more holes?