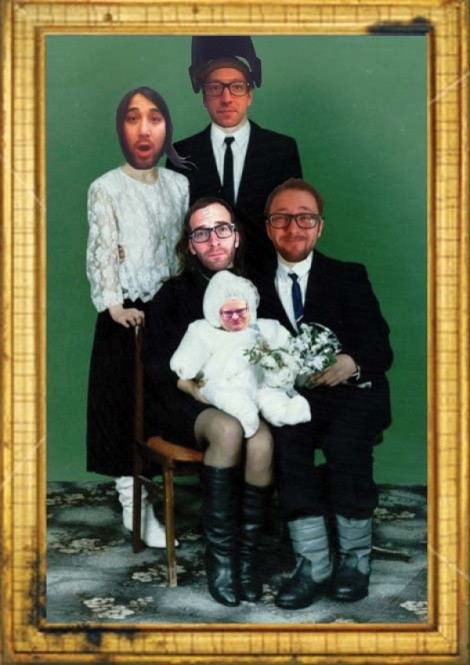 It’s hard to believe that one of Salt Lake City’s most popular live acts has never done an “official” recording. Working completely through word-of-mouth, letting their music speak for itself, Laserfang has grown a cult following during the past five years with almost zero thought to producing an album. Until now.

The group came about after the post-punk ensemble that was I Am Electric fell apart back in 2005, after which four of the members decided they liked what they heard when they played together and formed their own project.

The band is headed up by Shane Asbridge on lead guitar and vocals, and includes Weston Wulle on bass, Mike Torretta on drums and Stephen Chai on sax and various instruments as needed.

After a few years of playing around town, the band decided they wanted to move more toward a “new dance/psych approach,” bringing in Brice Okubo as part of the lineup on keyboards to add a synth modulation to the gritty guitars. Shortly after the change, Torretta took off to work on his own projects, making way for Josh Dickson to pop in as his replacement and solidify the current five-man lineup.

Around mid-2008, their unique sound locked into place and the local music scene took notice. Their stage presence and unapologetic approach to sound garnered live KRCL appearances, a feature spot in SLUG’s Localized showcase and headlining shows at numerous venues. However, this entire time—even with a full set list and opportunities to record—the group put little focus into producing recordings, releasing only a couple demos via MySpace.

“We’ve recorded a few songs here and there, but nothing that was made available to the public,” Wulle says. “I guess the simple answer is that the timing wasn’t right until now.”

Laserfang hit the studio in February at Man Vs. Music Studios with Mike Sasich, who was specifically chosen to capture their uncommon audio ambience while trying to get the smoothest recording possible for vinyl.

Talking about the session as a whole, Wulle recalls that “recording with Mike was great; he knows what he is doing in a studio. He even plays guitar on a few tracks.”

Laserfang finished with tracking and mixing in a matter of two months, wrapping up around May. The project was mastered to completion by John Golden. Shortly after the album was finished, the group decided to sit on the final product for months while looking for the proper label, a process which brought them to Kilby Records, where Lance Saunders and Will Sartain have been big supporters of the band.

The end result is the aptly titled Mammoth, named for the side project the group temporarily created while changing drummers; a number of songs written during that time were adopted into their set upon reformation and recorded for the album. The album is as close to a Laserfang show as you can get, immediately dragging you into their own private house party, with the subtle riffs showing the melding of post-punk and experimental rock. It’s almost chaotic in nature, yet refined to a near-classic-rock sheen. Asbridge’s howling and commanding vocals are a perfect catalyst to the ongoing groove.

Every track plays out like a different treat from the cookie jar, leaving you wanting more when you hit the bottom. Along with beautiful artwork from the talented Sri Whipple, Mammoth may be the last great local album to come out in 2010, and it’s a superb “official” debut.

City Weekly readers can get 25 percent off the digital download of the album by using the code cityweekly at Laserfang.com