Last Words From a Desert Scribe 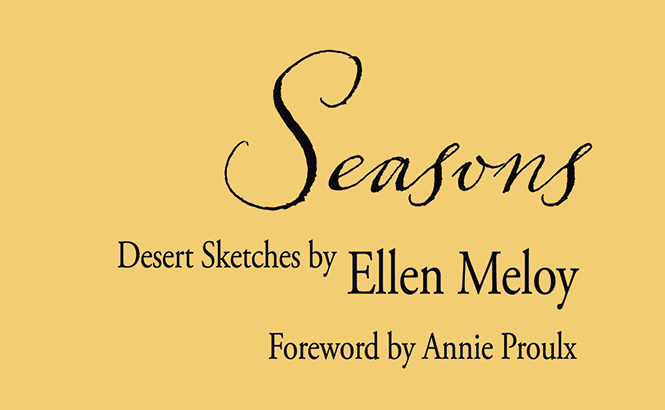 Who hasn't wondered what a favorite writer might still have bestowed on the world if not silenced too soon? What fan doesn't long for more—letters, journals, unpublished fragments, even an annotated grocery list?

Devotees of the late Southern Utah essayist Ellen Meloy need no longer wait. The sketches gathered in Seasons predate her untimely 2004 death by up to 10 years and are not, strictly speaking, last words. But for those who haven't yet discovered Meloy, they can serve as a gateway drug to her profound, sometimes deceptively breezy work.

Seasons' opening salvo, the thoughtful but hilarious "I Stapled My Hair to the Roof," encapsulates her approach. Outspoken and passionate, Meloy skewers grandstanding, mindless consumption, militarism, patriarchy: "In pioneer times, while the men mumbled about posses and punched each other's lights out, the grandmothers of my Anglo neighbors simply got off their horses and took care of business." She makes an absolute gas out of much that is ghastly.

Meloy's eloquent levity, however, was no mere parlor trick; the humor sugar coats the pills we'll have to swallow if our planet is to heal. It threads through all of her books, even The Last Cheater's Waltz: Beauty and Violence in the Desert Southwest, her 1999 account of a nuclear road trip. Such light-handedness has been lacking in too-often dour and preachy "nature writing" ever since Edward Abbey rowed into the back-of-beyond, followed all too soon by this Bluff, Utah, philosopher-clown.

Seasons' gems all originated as radio pieces. The "Roof" story in particular showcases Meloy's structural genius. Stapled between her gables, she contemplates the view rippling concentrically outward from the house to include the San Juan River, Diné Bikéyah (the Navajo heartland), the Colorado Plateau, Earth and the universe—a mirror of this writer's bio-centric orientation. In the essay's final scene, she flips the perspective, seeing herself through the eyes of gyre-borne vultures: a speck in the landscape, a "two-legged smudge on a plywood platter."

Like the critters and plants Meloy cherished, nothing was too commonplace to escape her laser-beam attention. She kept returning to desert bighorn sheep, which she personalized and immortalized in Eating Stone: Imagination and the Loss of the Wild (2005). They, like their domesticated cousins, make an appearance in Seasons. The tame ones bounce around a truck bed "like berserk piñatas," alas, slaughterhouse-bound.

For this reviewer, a former Moab guide, the magic portal into Meloy's universe was Raven's Exile: A Season on the Green River, her 1994 distillation of eight years of floats through Desolation Canyon with her husband, Mark, a Bureau of Land Management ranger. It is hard to resist an author who so downplays her considerable outdoor skills, who named one place "Deviated Septum Riffle" after her oar struck bottom and its shaft was rammed into her nose.

The curiosity of this sagebrush sage delighted in the bizarre. Who knew that European classical violin virtuosos palmed toads before a performance so that neurotoxins from the amphibians' glands would numb their own and prevent sweating? Or that medieval science posited that geese hatch from mussels? Meloy's own behavior displayed streaks of eccentricity when she crossed barbed wire and, in socks and pajamas, thrashed through tamarisks in the dark, alerting geese about to be ambushed. Or when she swapped notes tucked under windshield wipers with a literary stalker, as recounted in The Anthropology of Turquoise: Reflections on Desert, Sea, Stone, and Sky.

That collection, a 2002 Pulitzer Prize finalist, also brought her visual verve to the fore. A plein-air watercolorist and one-time art curator, she'd studied at the Sorbonne, so it is no surprise that her writing sparkled with haiku-like lines, conjuring scenes worthy of Van Gogh; sunbathers' skin "blushes in lambent coral air or ripples in a stab of lemony sunlight." One wishes samples of Meloy's paintings were at hand to match with her writing, as Seasons' few black-on-white drawings give only inklings. Her artistic training taught her patience, to just sit and watch the light change and notice nuances—terracotta, blood red, salmon, vermilion, the "temperament of iron" scoring mesa flanks.

This latest outing is a slim volume, but you shouldn't be fooled. It telescopes decades spent exploring home and the desert, two terms that for Meloy became synonyms. Stuff it in your pocket, perch atop the Goosenecks or the Raplee Anticline, where wind gusts can make the roots of your hair ache. Relish it, and if you're lucky, some bighorn sheep might pop up from the limestone, "all springs and coils."

A version of this article originally appeared in High Country News.