Two bills could frame reform in 2013 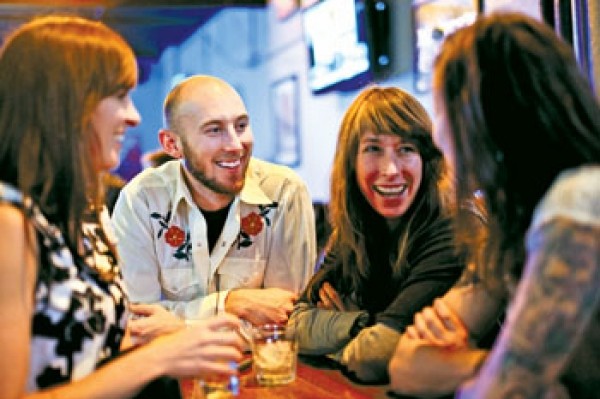 
By last call of the 2012 Legislative session, Utah drinkers will still be thirsty for reform, as issues of liquor-license relief and privatization of state liquor stores will be kicked down the road to the next session. But two bills this session could, if passed, frame the alcohol discussion for the 2013 Legislature by providing accurate data in the debate about state alcohol control.


Rep. David Litvack, D-Salt Lake City, and Rep. Ryan Wilcox, R-Ogden, each has a bill that would aid future decision-makers. Wilcox’s bill would create the state’s first central clearinghouse for alcohol-abuse statistics, while Litvack’s bill would create a committee to study the balance between public safety and how Utah laws affect business in the state.


The majority of liquor-reform bills in the 2012 session have been aimed at tightening controls and adding oversight to the Department of Alcoholic Beverage Control, which faced scandal in 2011 when facts emerged that the DABC’s director, Dennis Kellen, had allegedly mismanaged funds and steered nearly $400,000 in no-bid contracts to a business owned by his son.


At the beginning of the legislative session, Wilcox was developing a bill that would have privatized Utah’s state liquor stores by keeping the state as the liquor wholesaler that then sold to private retail entities. That bill was shelved and substituted with a bill that would keep state alcohol funds with the Tax Commission, rather than the DABC, to provide more checks and balances.


Another component of the bill is the creation of an Alcohol Abuse Tracking Committee. Wilcox envisions the committee not as a one-time study group that would make policy decisions, but as a committee that would work on an ongoing basis to provide accurate data to policymakers. Members of the committee, which would be headed by the Utah Department of Public Safety, would include representatives from the DABC, the Utah Department of Health and the Utah Substance Abuse Advisory Council.


Early on, Wilcox realized that despite numerous law-enforcement agencies gathering data on alcohol-
related crimes, they weren’t sharing the information. His bill would help create a kind of “informational clearinghouse,” he says, where statewide data could be provided to policymakers.


“We’re making all of these laws based on tradition and hearsay in some cases, but they are long-term policy decisions we are making that we don’t necessarily have accurate data on,” Wilcox says.


Every time someone is arrested for driving under the influence, basic information is collected and placed on a form. But “there are eight different systems in the state used by each of the different agencies,” Wilcox says. “And none of them talk to each other.”


Good data can be hard to find, Wilcox says, a point that was driven home when he and his colleagues were trying to confirm a statistic several lawmakers believed, which cited alcohol as being tied to 40 percent of abuse cases involving the Division of Child & Family Services. When they drilled down on it, the department informed Wilcox and his colleagues that the number was actually 5 percent. “Not even close,” Wilcox says.


The bill also brings on board the Department of Technology Services, which will work to possibly develop software that will allow for better sharing of alcohol-crime data among law enforcement.


Wilcox says such innovations won’t be too costly—the bill has a $45,600 fiscal note—since the Department of Public Safety already has alcohol-enforcement liaisons in major state law-enforcement agencies, who, under the bill, could help aggregate the data.


A bill that could provide a one-time chaser to Wilcox’s bill is Litvack’s House Bill 184, which would create a “Blue Ribbon” commission to make alcohol-policy recommendations. The commission would be comprised of legislators, members of the Governor’s Office of Economic Development, citizens with an active interest in alcohol policy, and representatives of different liquor-license holders, such as club and restaurant licensees.


“Wherever you fall in the debate about alcohol policy, there are three major areas we agree on: preventing DUIs, preventing underage drinking and preventing overconsumption,” Litvack says. “So part of what the Blue Ribbon Commission does is evaluate our regulations to see how well we are meeting those goals and to check to see whether we are over-regulating.”


That might include revisiting the need for the infamous “Zion Curtain” partition, which shields restaurant patrons from viewing the preparation of drinks.


If major issues such as loosening Utah’s liquor-license quotas are studied, or privatization of liquor stores comes up, Litvack says it will be done objectively. While de-regulation of business may be a battle cry for many of Litvack’s conservative colleagues on the Hill, it’s another story when it comes to alcohol regulations, and legislators tend to bristle at questioning the effectiveness of certain control policies.


But “the purpose of the commission is to ask those types of questions,” Litvack says.

At press time, Litvack’s HB184 and Wilcox’s HB354 substitute were both waiting to be heard in the Senate. For more updates from the 2012 Legislature, follow @EricSPeterson on Twitter.

Senate Bill 66: DABC restructuring
Sponsored by Sen. John Valentine, R-Orem, SB66 is a companion bill to Wilcox’s for restructuring the Department of Alcoholic Beverage Control. SB66 creates a special audit division that reports directly to the liquor commission and would expand the commission membership from five to seven members. The bill, as amended, also allows an interim committee to study the pros and cons of privatizing the DABC.
Likelihood of Passing: Smooth Finish

Senate Bill 119: Booze Sampling
After some tweaking, Sen. Ross Romero, D-Salt Lake City, is likely to pass his wine-sampling bill, which allows restaurants and high-end establishments to sample wines, beers and spirits before purchasing them, under supervision of a DABC employee, either at a DABC store, packaging agency or trade show. None of the samples are allowed to be swallowed.
Likelihood of Passing: Smooth Finish

House Bill 193: Drinkers Who Are Deciders
Rep. Brian Doughty, D-Salt Lake City, has a bill that has yet to make it to the Senate that would require at least two members of the DABC commission to be individuals who actually drink alcohol. Having actual drinkers on the commission, he argues, would bring more balance to the process.
Likelihood of Passing: Cut Off by the Senate