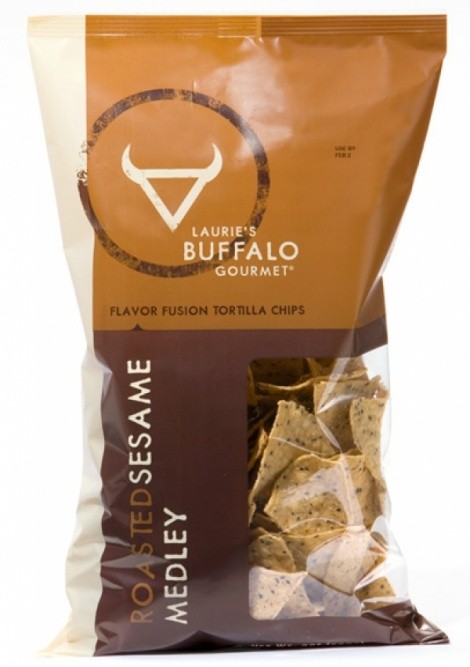 With Beatles music blaring from the jukebox of a Holladay burger joint, Laurie Seron and her family would sip copious cups of cola, staying awake to fry tortilla chips into the night’s wee hours. Seron says the diner’s owners let them use the fryers after the restaurant closed; she doubts they knew that she’d tuck the children into unconventional booth “beds.”

The first day of operation, in September 2000, Laurie’s Buffalo Gourmet produced 20 cases of chips. “I thought there was no way we were going to sell them all,” Seron says. They’ve come a long way since fryin’ to the oldies.

The strange name, buffalo chip—slang for cow dung—was originally a joke during a brainstorming session but stuck, aided by the family-designed product logo. They thought they could change the phrase’s meaning, so they ran with it. Their chips initially gained recognition the first year with sales to gourmet grocer The Store (2050 E. 6200 South); others soon followed. After two years, Seron rented a commercial kitchen to meet demand. Then, a two-day appearance with the Gabby Gourmet so propelled business as to necessitate a culinary intervention. Seron hired Manuel’s Fine Foods in Woods Cross five years ago for production assistance, and now the 5,000 cases produced each day can be found at natural grocers nationwide. “When you pass the Whole Foods test, you have really arrived,” Seron says.

“Even though we haven’t gone the total organic direction yet, we have very simple ingredients in our products—all-natural flavors and colors,” she says. The chips now come in bountiful flavor varieties (including sun-dried tomato & basil, black bean & garlic and more) complemented by a salsa lineup (fire-roasted pueblo chile, among others). “I’m proud that when you eat the chips, you can actually taste the ingredients,” says Seron, whose favorite is toasted sesame.