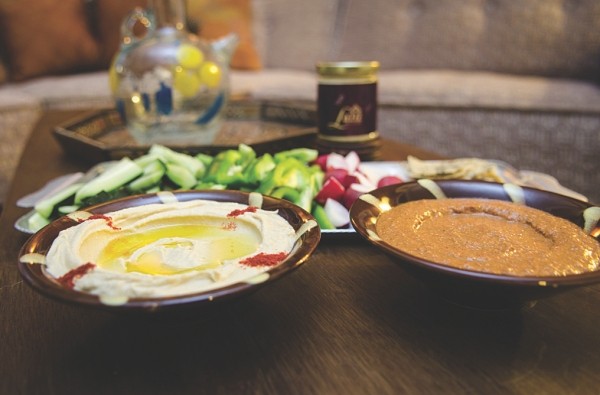 About a year after Moudi Sbeity and his partner, Derek Kitchen, began selling Laziz Foods’ Middle Eastern spreads at markets and grocery stores, they faced their first real test: In March 2013, Sbeity’s mother, who taught him how to cook, visited from Lebanon—and she was going to taste the brand’s signature hummus for the first time.

That week, Sbeity experimented with the recipe. Typically, their addictive, authentic hummus starts with a combination of lemon juice, garlic and salt—to allow a garlic infusion to commence—which is added to tahini, followed by the chickpeas. This particular week, however, Sbeity added everything at once, and the experiment sat in the fridge alongside their actual hummus. Sbeity’s excited mother pulled out the trial batch, tried a huge spoonful and said, “Oh, that’s really garlicky. That is not real hummus,” Sbeity mimics in a Lebanese accent.

“It was horrible,” he says with a laugh, “but when she tried the real one, she was impressed. So, it passed the test.”

In addition to the mom-approved hummus, Laziz makes muhammara (a mild pepper spread made with pomegranate molasses) and toum (a preserved garlic condiment that goes well on just about anything). Both stay true to traditional Lebanese recipes, although Sbeity and Kitchen don’t intend for people to use them exclusively for Lebanese food.

“The whole goal of Laziz is to bring Middle Eastern food to Utahns, yes, but [also] to bring it to people’s homes to create a culinary dynamic where they mix these spices and flavors with their own comfort food,” Sbeity says.

That’s a practice experienced firsthand by Sbeity, who moved to Logan from Lebanon as a refugee years ago. He found himself eating cafeteria food in college and looking for something more—a culinary adventure leading from Logan’s fast food back to, years later, his traditional cuisine. Sbeity’s mom is pretty proud.