Life in the Fast Lane

A dining critic reports on his week of eating dangerously. 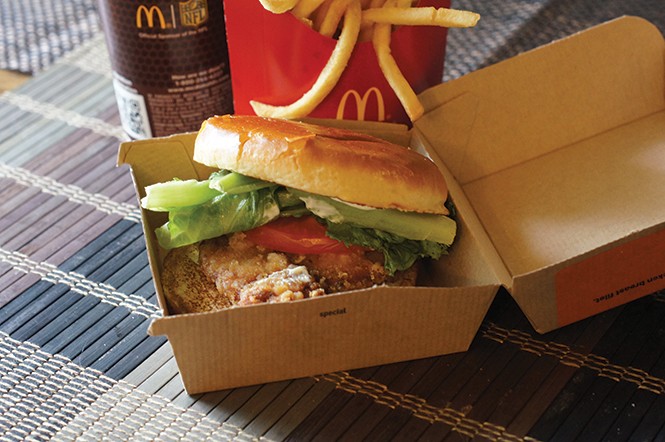 It began during this year's Major League Baseball World Series. I was getting mighty testy about being bombarded with commercials for Arby's, Burger King, KFC and Taco Bell, along with ads for trucks, insurance, phone service and remedies to treat erectile dysfunction.

As I grumbled between each inning, it occurred to me that I so rarely set foot in fast-food restaurants (Popeyes being the single exception) that maybe I was unfairly pre-judging them. We all know about the lack of high nutritional standards in fast food joints, but I assume most people go to these places with eyes wide open and not really looking for a meal that their yoga instructors would approve of. They want a Whopper. But, perhaps I'd been criticizing these places for years—and not eating in them—just because they're such easy targets. Maybe it was time to get into the fast lane, and find out what this stuff actually tastes like.

Over the course of eight days, I ate at some of the popular fast-food franchises touted by the series' advertisers. That might not be the most scientific, statistically sound or significant study but, hey, I'm no Morgan Spurlock, and I wasn't willing to risk life & limb for the sake of a City Weekly article. Do you have any idea how many out-of-control toddlers there are in these places?

Still, I got a pretty good snapshot of America's fast-food dining scene. And maybe it was just coincidence, but I also managed to gain nearly 10 pounds in my week of eating dangerously. The things one does for science.

Confession: I actually like A1 Steak Sauce. Smothering my mom's overcooked steaks with A1 made them almost edible, and I grew up with a fondness for the stuff. So, after seeing the commercial about Arby's A1 Special Reserve Steak Sandwich ($5.69) for the 15th time during the World Series, I caved in and ate one. To call this a "Steak Sandwich" is really bending the definition of "steak." Thin slices of Angus beef are overpowered with an A1-based sauce that doesn't really taste much like A1 Sauce. It's smokier, for starters. The sauce just kills everything it touches, and not even the crispy Steakhouse Onion Ring or cheddar cheese survives. Grade: C-

Angus beef shows up again in the Carl's Jr. 1/3-pound Tex Mex Bacon Thickburger ($5.51), which is made of 100 percent Black Angus beef. This was a burger with potential. The beef burger is topped with nicely charred, fire-roasted red and green peppers, thick-cut bacon, pepper jack cheese and a zippy "Santa Fe sauce" on a bun (available as a half- or third-pound patty) with tomato and lettuce. I really liked the flavor of the Santa Fe sauce—which seemed to be a blend of mayo with some cayenne and paprika, plus a little sweetness (from teriyaki?)—and I really dug the charred peppers. The beef patty, however, tasted (and even looked) like it had been lost in the back of the walk-in for the past decade, tasting of freezer burn and looking grayish. Otherwise, this one could've been a contender. Grade: C

Taco Bell's Volcano Quesarito Box ($6.93) came with a contest code to win a limited-edition Gold PS4 Bundle. However, when I texted in my code, it had already been used; methinks somebody working at my local Taco Bell was texting in the codes clearly printed on the outside of the Quesarito boxes. Nasty Velveeta-style cheese aside, the hot and spicy Volcano Quesarito—a grilled flour tortilla filled with ground beef, rice, beans, cheesy "Lava" sauce and reduced-fat sour cream—was damned tasty. It came with a regular crunchy taco (bleh) and a Fiery Doritos Locos Taco that tasted like it was coated with Doritos-flavored chalk. I'm still pissed about the PS4. Grade: C

I am an unrepentant fan of Popeyes Louisiana Kitchen. I love its spicy chicken. However, for this project I decided to branch out and try Popeyes Shrimp Po' Boy ($5.36), and was pleasantly surprised. It's a generous portion of breaded-and-deep-fried small shrimp with lettuce, pickles and tartar sauce (I wish it was remoulade) on a pretty good soft baguette. Drizzle on some Crystal Hot Sauce, and you're good to go. Grade: B+

It had been decades since I last visited KFC and, thankfully, I won't have to do it again in this lifetime. A foodie friend of mine best described my KFC Two-Piece Fill-Up Box ($5.38) as "a rainbow of brown and white." It was mushy chicken, mashed potatoes that you could eat using a straw, a nothing-special chocolate chip cookie, and they forgot to give me my soda. The good news is you don't need teeth to eat at KFC. Grade: F

Since Carl Edwards is my favorite NASCAR driver and is also a spokesman for Subway, I could be biased. However, I really did enjoy my delicious Subway Turkey Italiano Melt ($7.52/value meal). Sure, I'd rather have a sandwich from Caputo's or Grove Market, but this roasted turkey sandwich—toasted on Italian bread with Genoa salami, spicy pepperoni, provolone, and Italian vinaigrette—hits all the right notes. Grade: A

Sriracha is this year's "it" sauce, so Burger King lazily repurposed its Original Chicken Sandwich bun as the Extra Long Sriracha Cheeseburger ($6.12/value meal). It consists of two side-by-side burger patties (about 1/8-inch thick) with almost-melted American cheese, iceberg lettuce and white onion, topped with Sriracha sauce. The sauce hits the tip of the tongue at around the third bite, and from then on it's a three-alarm fire. A pretty tasty one, however. Grade: B

I sometimes swing by McDonald's on a ski day for a 1-buck Sausage McMuffin, which I like. But, in the interest of research, I decided to try McDonald's Premium Buttermilk Crispy Chicken Deluxe Sandwich ($6.12/value meal). The glossy bun looks fantastic, but is as dry as I'd imagine eating kitty litter to be. Not lovin' it. Throw out the bun and unripe tomato, and just enjoy the crispy chicken with the crunchy romaine lettuce. Grade: D