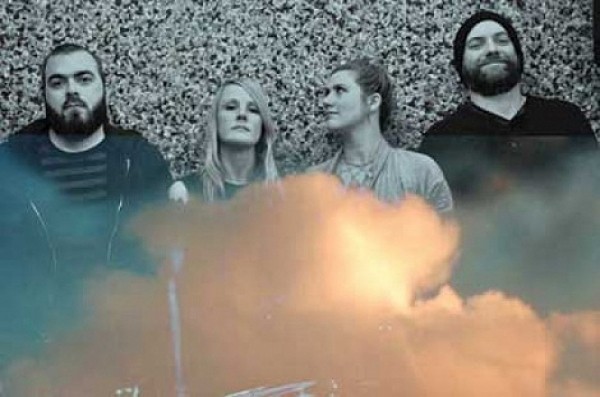 Like a hurricane hitting a shore, the heavy-rock Salt Lake City band Light/Black has rolled into the local music scene and left a path of musical destruction in its wake. The group has been making music for just over a year, earning cred with rock-loving crowds for their engaging performances. And now, the release of a self-titled debut album will keep that downpour of hype coming.

"My goal with this band was to make music that we really like and want to listen to,” says singer and bassist Carri Wakefield. “I thought it was kinda strange when I heard someone say we kind of have a ’90s sound, because we’re not necessarily going for that. But I guess it makes sense, since many of our favorite influences are from that time period.”

Light/Black formed when Wakefield and her husband, Levi Lebo (guitar), started jamming in early 2012 with Josh Asher (drums) and Danielle Mariott (guitar). The group quickly scored killer gigs with local favorites like Pleasure Thieves, INVDRS and Wovenhand, which helped them earn an instant following and an unofficial branding of “doom rock.” But when asked about the informal genre-labeling, the band members have a different take on their sound.

“I’m not sure if ‘doom’ is the word that I would use to describe us, although it’s been said that we have that kind of sound,” Wakefield says. “We come from more of a melancholy, heartfelt perspective. We like minimal/meditative songs. The ‘doom’ part probably comes from our love of loud amps. Take that away, and we have more of a dark folk band.”

The band soft-released some tracks online in late 2012, but it was clear that a full-length album was in order. Everyone took it on as a collaborative effort both inside and beyond the studio.

“The songwriting, album art, etc., was all DIY,” Wakefield says. “We recorded with Andy Patterson, which is always smooth and a total blast.”

The album features a perfect blend of haunting vocals and impassioned rock structure. The four musicians have created the equivalent of a sonic steamroller: You hear it coming from a mile away, and then it flattens everything in its path, especially your eardrums. This effect stands out on tracks like “Last Exit” and “The Gift,” where Lebo and Marriot have crafted a steady combination of distorted barrages and near-pinpoint-accurate solos, kept on time by Asher’s pounding set that sounds like it made the kit fall apart afterward. And in the middle, Wakefield’s voice draws you into a different world, like the lighthouse in the storm, the guiding beacon leading you through the crashing sound waves, especially on tracks like “One Good Turn Deserves Another” and “Forest of Noise.”

This is an album you need to pick up and allow to blow apart your speakers.