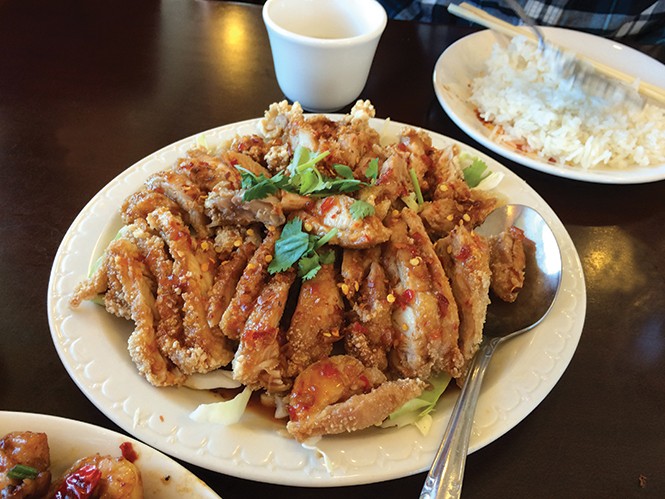 Many "Chinese" restaurants here, and in the United States in general, are a hodgepodge of many different regional Chinese cuisines and dishes; none are my favorites, since they're so unfocused. That is not the case with Mom's Kitchen, however, where two culinary cultures come together under one roof—and the combination is killer.

Mom's Kitchen is aptly named, since it's operated by two moms. Mama Zhang hails from Beijing, while Mama Chen is Taiwanese. The two first met in 2010, became friends, longed for the traditional flavors of their homelands and, in 2014, opened Mom's Kitchen. Northern China is well represented at Mom's Kitchen in the form of handmade buns, noodle dishes and snack-style items of the sort you'd find being sold by vendors on the streets of Beijing. Taiwanese cooking is similar to Fujian, and features a lot of tofu, pork, cabbage, seafood and rice-based dishes. The spicing tends to be very subtle.

Don't expect a cookie-cutter Chinese restaurant experience at Mom's. Take lunch, for example. Most places serve a combination lunch: a selection of entrees (sweet & sour pork, Kung pao chicken, beef & broccoli, for example) with fried or steamed rice, soup and an oily fried egg roll. At Mom's Kitchen, the full restaurant menu is available anytime and the lunch specials—there are six priced from $6.99-$8.99—come with a hard-cooked egg, cabbage, tofu, rice and a choice of main dish, four of which are pork dishes; the other two are beef.

A lunch of minced pork with steamed rice ($6.99) was better than I'd hoped for. Tender minced pork came in a bowl with brown sauce and the slightest hint of star anise—a flavor I'd find repeatedly at Mom's—with a generous mound of steamed white rice. Alongside were a cold cabbage salad and a hard-boiled egg. The brownish color of the egg was a tad off-putting, until I realized it had been marinated or cooked in something—again with the flavor of star anise—that turned the outside white of the egg brown. It was delicious, as were the soft triangles of simmered tofu on the lunch plate.

Noodles, buns, potstickers and such at Mom's are lovingly homemade, and taste like it. Fried dumplings ($6.99/8 pieces) are an absolute must. Unlike standard purse-shaped Chinese potstickers, these dumplings look more like Italian cannelloni—thick, rectangular pasta "dumplings" stuffed with ground pork and scallions, pan fried so that the edges of the dumplings form a crunchy "lace," and served with standard soy/rice wine dipping sauce. Be sure to ask for some of Mom's house-made hot chili oil to kick things up a notch. The oil has a fruity flavor, and I was actually disappointed when I learned they made it in-house; I'd hoped I'd be able to buy some at an Asian market.

An order of four of Mom's pan-fried stuffed buns ($6.99) actually came out as five. These are thick, beggars-purse shaped wheat flour buns stuffed, like the dumplings, with minced pork and green onions, and equally delicious. Another terrific starter/small plate is the green onion cake ($4.99)—a crepe-thin wheat flour "pancake" with minced green onions between the layers, fried crispy in oil, sliced into wedges and served with its own dipping sauce.

Service at Mom's Kitchen is extremely friendly and the young family members who work as servers speak English quite well, even though on my visits I've been the only non-Chinese or Taiwanese customer. They're honest with their information and recommendations, too. When I asked about the Taiwanese-style Pig Intestines and Blood in Pot ($12.99), our server smiled and said simply, "I don't think you'd like it ... "

Speaking of exotic ingredients, to all the goons online who've posted their outrage about Mom's Kitchen serving "cats ears": Do a little freakin' research! The so-called "cats ears" referred to on the menu are pasta noodles shaped like cats ears. No need to call the ASPCA or PETA.

OK, I admit to ordering the Kung pao chicken and shrimp ($12.99). And it was awesome. This was a much more traditional Kung pao that you'll find in most Chinese restaurants: nothing more than chicken morsels and whole shrimp fried in oil with peanuts and dried chili peppers, garnished with minced scallions. No celery, no onion, no green peppers, no carrots, no filler, no nonsense. It's the best Kung pao in Utah.

Bean curd is a staple of Taiwanese cooking, and of the many tofu dishes offered at Mom's, I really like the shredded pork with dried bean curd ($8.99). "Dried" might just be an incorrect translation on the menu, because the tofu—cut into thin strips—was anything but dry. Firm, yes, but not dry. It's thin strands of pork wok-fried with the tofu, chili flakes, and served in that anise-kissed brown sauce I like so much, garnished with chopped scallions.

Other excellent dishes include Thai-style spicy & hot chicken ($12.99) that's breaded, fried, and spiked with incendiary drops of hot chili sauce; and, at the other end of the spice spectrum, the subtly flavored Hakka-style stir-fried cabbage with tofu, pork and squid ($12.99). If you only order one thing at Mom's, however, make it Mom's cold noodles ($6.99) with a silky, heavenly peanut sauce. These dan-dan type homemade noodles simply can't be improved upon.

I'm salivating merely thinking about my next chance to try Mom's cooking.