Could one knit a sweater from human navel lint? 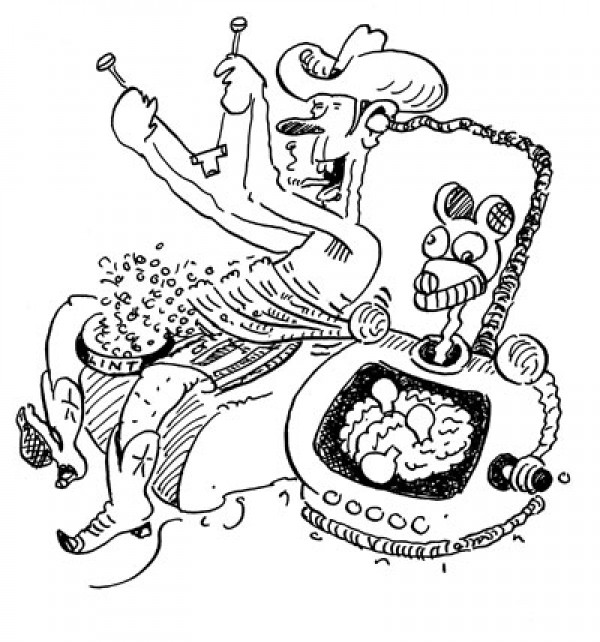 Could one knit a sweater from human navel lint? —Craig Charles, Dallas

Good thinking, Craig. Why waste this valuable resource? And why stop at lint? Think of the environmentally sensitive duds one might make from used dental floss, or the hair fished from bathtub drains.

Still, one does wonder whether lint has what it takes to be a practical textile feedstock. Luckily, the navel-lint research community has come through. Of particular note is Georg Steinhauser of the Vienna University of Technology, who in 2009 published a treatise titled “The Nature of Navel Fluff” in the journal Medical Hypotheses.

Georg ascertained a number of important facts about navel lint, which we’ll review shortly. And what did he get for his trouble? Abuse, that’s what. No sooner had his article hit the streets than the Annals of Improbable Research, which specializes in calling attention to what it considers risible scientific inquiry, published a “special Navel Lint issue,” in which the Steinhauser opus figured prominently. Folks, really now. Getting penicillin out of bread mold sounded pretty ridiculous too.

Back to Georg’s article:

• He collected an astonishing 503 lint samples over three years and individually weighed them, displaying his results in a mass distribution chart. We learn that the average sample weight was 1.82 milligrams—that is, 1.82 thousandths of a gram.

• Men produce the most navel lint. Georg hypothesizes that this is because abundant male abdominal hair surrounding the belly button scrapes the lint free from the subject’s cotton clothing and channels it into the navel. When he shaved the area around his belly button, lint production plunged.

• The total weight of Georg’s collected lint—three years’ worth, mind you—was less than a gram.

Clearly, therefore, collecting sufficient lint to make a sweater would be a slow job. My assistant Una calculated that getting enough for a long-sleeve cotton top, which for some reason she thought was a better benchmark than a sweater, would take 150 years; a cotton sweatshirt would take about 752 years. However, anyone who has time to collect belly button lint is obviously in no hurry, and all that cotton would seem to provide the raw material for spinning thread. Could we do it?

Sadly, the answer is almost certainly not. Most cotton-spinning processes need an average fiber length of at least two-thirds of an inch, much longer than you’d expect to find in navel lint. While you can spin shorter fibers with a lot of effort and some binder, remember the reason navel lint is there in the first place is that it worked loose from whatever you were wearing. If you harvested some of the body’s lengthier fibrous product—for example, nose hairs grown by men of a certain age—there you might have potential sweater material. But navel lint is suitable only for stuffing a pillow, and a pretty small one at that.

Magic Touch
We humans have developed a liking for stroking because grooming is a social activity among primates and supports bonding. But if we stroke other animals that can’t stroke back due to a lack of hands, they still seem to feel deep pleasure. Given the widely varying anatomy and social behavior of animals I find it surprising so many welcome being stroked. Can you shed some light?
—Thorsten

I don’t know about all animals. I’ve never noticed that stroking snails sends them into ecstasies. But most mammals seem partial to it, no doubt in the big-picture sense because, as you say, it promotes grooming and bonding. In fact, there’s reason to think stroking is so important that we higher-order vertebrates now like it because that’s the way we’re wired, with certain neurons in the skin that respond only to stroking.

How do we know this? Because of the following bizarre experiments:

• Human subjects were stroked on their forearms and palms by robots (robots!) at various speeds and asked to report which strokes felt the nicest. Meanwhile, researchers monitored what they figured were the stroke receptor neurons via electrodes they’d hooked up. Findings: 1. the volunteers most liked being stroked at between a half inch and four inches per second, and 2. the neurons believed to be stroke receptors fired fastest within that speed range.

Conclusion: The pleasure we take in a caress is basically an electrical response.