Did any civilians inadvertently cause the loss of Allied ships during WWII? 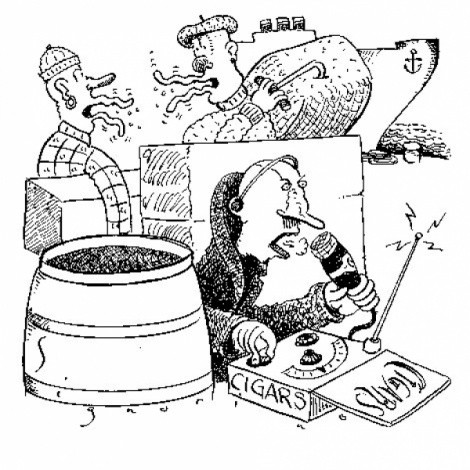 I ran across the phrase “loose lips sink ships” on the sports page the other day (in some article about Twittering athletes harming their teams). I know this was part of a World War II propaganda campaign to keep civilians from talking about troop movements and shipping schedules. But did loose lips actually sink any ships? That is to say, did the loss of an Allied vessel ever directly result from inadvertent civilian disclosure of military secrets? A difficult question, but that’s why there’s a Cecil. —Curtis Edmonds, Hillsborough, New Jersey

Huh. And all this time everybody’s been blaming my mom and dad.

Concern about maritime blabbermouths arose in Britain during World War I when enemy U-boats started going after merchant ships. And with good reason—Britain was awash in German spies, or at any rate suspected spies. By the end of the war British counterintelligence was reading the mail and cables of more than 13,500 individuals. While this undoubtedly reflected wartime paranoia to an extent, authorities turned up enough evidence to try 31 alleged spies between 1914 and 1917 and deport 1,700 suspicious characters.

A primary goal of German espionage early in the war was finding out about ship movements, and eavesdropping on dockside scuttlebutt was the best way to do that, given the primitive technology of the day. Some notable cases:

You see our problem here. Lots of Allied ships were sunk, and numerous spies were listening for loose lips. However, most of those captured were bumblers who got caught before they could do much damage—successful agents kept a lower profile. I came across only one instance of a spy who (a) collected info on ship movements and (b) claimed responsibility for sinking a ship. However, (a) didn’t lead to (b). It’s an interesting story just the same.

Swashbuckling adventurer Fritz Joubert Duquesne, a native of South Africa, lost much of his family during the brutal Second Boer War of 1899-1902 and developed a lifelong hatred of the British. Among other escapades, he claimed to have disguised himself as a Russian duke in 1916 and boarded HMS Hampshire in Scotland along with Field Marshal Lord Kitchener, who had commanded British forces during the Boer War. Duquesne said he alerted a German U-boat to the Hampshire’s approach, then escaped on a life raft. True or not, the ship was sunk, killing Kitchener and many others.

During World War II Duquesne organized 32 German agents in the U.S. into what became known as the Duquesne spy ring, which sent reports on ship movements and other sensitive matters to the Germans. The ring was broken up by the FBI in 1941, and its leader was sentenced to a long prison term. Admittedly Duquesne helped sink the Hampshire in one war and spied on ship movements in a different one, the loose lips that sent the vessel to the bottom were his own, and he may have invented his role in the ship’s demise altogether. So really this isn’t the greatest example. However, I’m doing the best I can.

Although the “loose lips” slogan was introduced in 1942, there’s no evidence of shipping losses due to talkative civilians during World War II. The Nazi code-breaking agency known as the B-Dienst learned most of what it needed to know about ship convoys by decoding intercepted Allied radio messages. Why the slogan then? No doubt it partly reflected the military’s habit of fighting the previous war, but it may also have been an attempt to get civilians to keep quiet about the devastation wrought by German subs.


Send questions to Cecil via StraightDope.com or write him c/o Chicago Reader, 11 E. Illinois, Chicago 60611. Subscribe to the Straight Dope podcast at the iTunes Store.