Over the years, Utah’s quirky liquor laws have become larger than life. 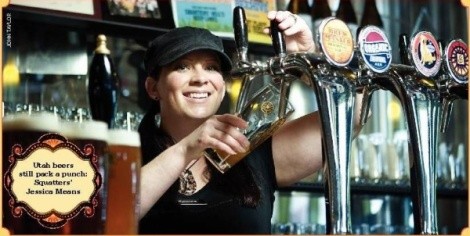 Utah has funny liquor laws. So goes the old saw. One wonders what tourists will talk about now that any Tom or Dick off the street can walk into a bar without a membership. (Probably having their IDs scanned.)

Myth: You Can’t Get a Drink in Utah.
Reality:
When it comes to blue laws, there aren’t many left on Utah’s books. Yes, the state liquor store is closed on Sunday. And, no, you can’t buy wine at the grocery store on any day of the week. But bars are open on the Sabbath, and no law stops restaurants from serving on that day, either. For you tourists, there is even a special state liquor store in your hotel (look for it at the gift store).

Myth: Utah Beer Is Weak.
Reality:
Utah beer has nearly the same amount of alcohol as beer served in corner bars in Chicago.

Jenny Talley, head brewer at Squatters Pub Brewery, explains that Utah, alone in the United States, measures alcohol by weight, limiting beer on tap to 3.2 percent. But if we were to measure alcohol by volume the way the rest of the world does, that would equal 4 percent. Standard beers made by the big three U.S. brewers range from 4.2 to 5 percent percent ABV. “You’ve got to drink nine beers instead of eight,” Talley says. “In reality, it’s just not that much different.” Utah’s own craft brewers argue that creating quality brew within the 3.2 standard has forced them to be better brewers. (One way to mask skunky flavors in a bad beer batch is by increasing the alcohol.) It’s hard to argue with the international awards they’ve racked up.

Myth: You Can’t Get Strong Beer in Utah.
Reality:
How does 10 percent strike you? All beer poured from the tap in Utah has to be 3.2 percent. (That´s 4 percent to you out-of-towners.) The Utah Legislature rejected a proposal this year to allow stronger brew to flow from the taps. But restaurants, bars and clubs can serve domestic and imported beer of any strength in bottles. Most restaurants and clubs have large selections. In recent years, Utah’s own microbreweries have been wading into the strong beer market, brewing 6 percent and super-high alcohol beers available at your local liquor store, club or restaurant like Uinta’s barley wine at 9.8 percent alcohol by volume, or Wasatch’s 8-percent Devastator. A two-year-old law change even allows breweries to sell the strong stuff out the back door.

Myth: There Are No Bars in Utah.
Reality:
The idea that you have to be a “member” of a “private club” to get a drink has been more a technicality than reality for years. But as of July 1, Utah’s “private clubs” are now officially open to the public. They are still not officially “bars.” The new law calls them “social clubs.” But don’t worry. The mob isn’t meeting inside, and the doors are open to anyone. Rule of thumb: If it looks like a public bar, it probably is. Go in.

Myth: You Can’t Get a Decent-Size Drink.
Reality:
2.5 ounces and counting. Utah requires bartenders to use a meter gun, but in 2008, the meter size was increased to 1.5 ounces. Sound small to you? That just happens to be onefourth an ounce larger than the standard free-pour for the nation, according to recent industry studies. As in the days when Utah drinks had to be poured from 1.7 ounce mini-bottles, Utah can again claim the strongest drink in the nation by law. Not all bars have gone away from the 1-ounce meter, but the size of the gun doesn’t dictate the size of the drink. Utah law allows drinks to contain additional ounces of “flavorings”—i.e., more booze. The lawyers get involved here somewhere, but before slamming Utah drinks, try a Utah martini (it begins with a metered pour of gin or vodka; then the bartender tops off the cocktail shaker with a different "flavor") or any of the other cocktail-glass-filling concoctions invented by creative Beehive State barkeeps.